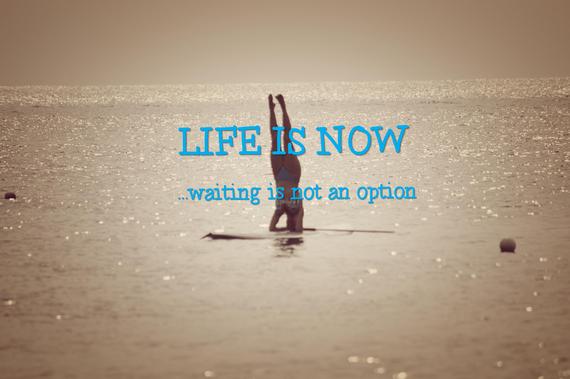 The new year always seems to fly up on the radar faster than I'd like. Have you tried to write the year 2015 yet on a check or while signing a form? Hard to do, isn't it?

I wonder why it's so hard to believe another year has come and gone when we are so quick to wish time away by pushing things off until tomorrow, ignorantly believing the next day will always be there. Before we know it, we'll be staring down 2016, then 2017, and so on.

I'm going to start eating better this year. (But don't.)

I can't wait for summer. I'm sick of freezing! (Then go on to complain about the heat in August.)

Ugh, if I have to change one more poopy diaper. (Okay, you can have that one.)

Why do we default to the belief that we have infinite amounts of time to get things done, to start new projects, or to "graduate" to another stage of life when the only moment we are actually guaranteed is right now?

In this moment RIGHT NOW, you have chosen to read this post rather than shampoo your carpets, stalk your ex-best friend on Facebook, or get started on that project you've been putting off forever.

Who do we think we are to wait? Why does it take a major life event or terminal illness to teach us how precious our days are?

This point was driven home to me recently as I watched one of my favorite television shows, Parenthood, starring Craig T. Nelson (you may remember him from the popular 80s show Coach or the movie Poltergeist). Zeek, a stubborn-as-they-come Vietnam Vet and patriarch of the Braverman family, tried to book a vacation to France to surprise his wife for their anniversary. The conflict was that Zeek had been recovering from a heart attack and his lifestyle now had severe restrictions, especially no flying. Zeek managed to coerce his college-aged grandson to help him initiate the plans however, those plans were thwarted when the grandson confessed to his grandmother about what Grandpa was up to. She was initially very upset then after talking further with Zeek, she agreed to let him make the plans once he was stronger.

Zeek had another heart attack that night and after a couple of code blues and splints placed in his heart, he woke up with major life remorse. He told his wife Millie he desperately wanted to go back in time to take her on that vacation when he had been feeling good. It was a heartbreaking scene as the realization hit that he may never be well enough again.

There is no rule in life that says if you start off in a certain profession that you have to stick with it until the end. There is no rule that says you can't try new things or can't take a vacation until the kids are grown. And there is definitely no rule saying you will be on this earth until you are old and gray.

Otherwise, what the hell is life's point?

It's only when we start paying attention to the moments in our day that time begins to slow down and we allow ourselves the chance to savor what each of those moments bring.

These moments could be:

-Watching our children play/talk/laugh rather than devouring our social media feeds.

-Taking a step outside to look up at the sky and marvel at the beauty of the clouds or the expanse of blue, or at the perfectly synchronized lift-off of a migrating flock of birds.

-Writing a letter to a friend, telling them why they are special to us.

-Calling our spouse and asking them on a spontaneous lunch or dinner date; taking it upon ourselves to foster the connection and intimacy we've been craving.

-Making a list at the end of the day of all the things we are grateful for.

Life is now...waiting isn't an option.

More:
healthy livingliving in the momentright now
Newsletter Sign Up
An essential daily guide to achieving the good life
Subscribe to our lifestyle email.
Successfully Subscribed!
Realness delivered to your inbox