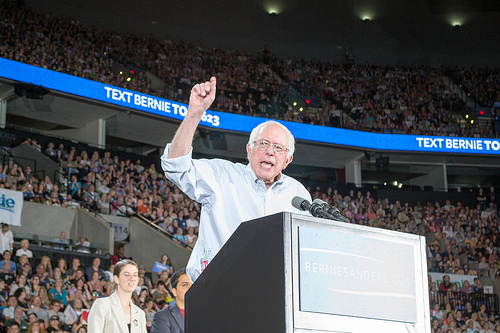 The Bernie Sandwich, named after Democratic candidate Bernie Sanders, is known primarily for what isn't in it than what is in it. Here's how to make one.

Cheese - There will be NO cheese in the Bernie Sandwich because cheese is made from milk and milk comes from cows. Cows have been enslaved by mankind thereby creating an underclass that has no power in our society. With their inability to speak English, cows are unable to advocate for themselves. With no lobbies or Super-PACs in Washington, they have been cut out of the power structure. Buying cheese only makes the rich richer and the cows poorer. So NO cheese in the Bernie Sandwich.

Condiments - There will be NO mayonnaise in the Bernie Sandwich because mayonnaise contains eggs and eggs come from chickens. Chickens have been historically oppressed on poultry farms, whether they are cage-free or not. Overcrowding and overuse of antibiotics are merely two of the examples of substandard treatment of chickens and Bernie hates that. He also hates that the mom chickens never get a chance to see their eggs hatch into sweet little fluffy chicks. So NO mayonnaise on the Bernie Sandwich. Bernie is considering allowing mustard on the Bernie Sandwich but under no circumstances will Guilden's, French's or Grey Poupon mustard be acceptable as those brands just smack of big money.

Bread - There will be bread on the Bernie Sandwich because what is more American and "common man" than the amber waves of grain? But for obvious reasons, it can't be Wonder Bread or Peppridge Farm or any of those other big food brands as they constitute a disproportionate share of the sandwich bread industrial machine. But if the bread is locally sourced by hippies in loose clothing who do not use any animals in the planting or harvesting process, then fine. There will be bread in the Bernie Sandwich.

Let there be Bernie Sandwiches for all! FREE!

Power to the people.