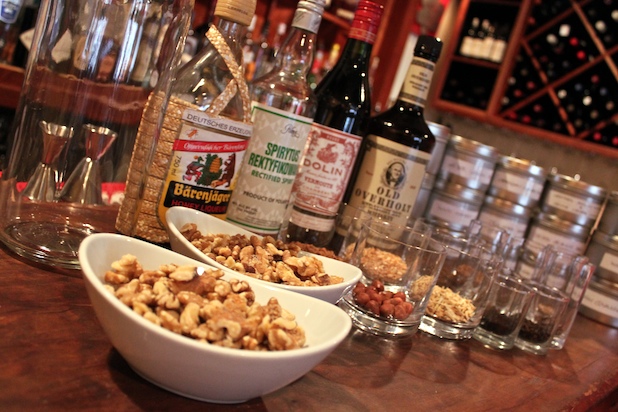 You almost hate to hear it: Making your own bitters at home? Yeah, it's actually not that difficult.

Because there's no excuse now -- and you start to think, how could I not have been doing this all along? Ideas for black cherry-ginger, or coffee bean-cocoa nib bitters rush in.

If you're tapped in to the cocktail zeitgeist, odds are you already have bitters on the brain. (If you're not, here's what you need to know: Classic cocktails? Having a major moment. Housemade ingredients? Huge. Bitters? Über retro-chic.) So you can imagine the on-trend factor of housemade bitters, and the cocktails made with them.

"They're a kind of late-blooming extension of the classic cocktail trend that peaked about five years ago, and the more widespread grassroots, farm-to-table phenomenon that's taken place in the industry more recently," explains Dan Carlson, bartender at New York restaurant Saul. Bitters, essentially a highly concentrated mixture of spirits and aromatic ingredients, act as "a kind of nuanced seasoning that galvanizes the flavor profile of a cocktail recipe." And while they have long since played a role in the craft of making cocktails -- the still widely popular brand Angostura dates back to 1824 -- the resurgence of the classic cocktail has pushed bitters out of the old folks' home and given them a whole new wardrobe at that.

At Saul, and its sister establishment The Vanderbilt, you'll find housemade bitters without boundaries: Saigon cinnamon and walnut; strawberry and Indian fennel. "When you make your own bitters you have the freedom to choose what kind of flavor combinations you'd like to anchor your recipes around. You come to respect each ingredient more fully and understand how they can act in harmony and discord with others," Dan remarks.

OK, so let's backtrack for a second. Because "not that difficult" is not to say that there isn't still some work involved -- think of making your own bitters as a sort of science project for the card-carrying cocktail geek. Is sourcing ingredients like quassia bark and gentian going to be a bit of a challenge? Sure. But consider this: One "starter" batch of bitters could easily last the average home bartender a year.

You just need to go in knowing that it's going to require some patience, and accept that it might not work out exactly as you anticipated. As Dan is quick to note, "It might sound silly, but I think you need to remind yourself that you're doing this because it's fun, and there is an element of risk involved."

More stories from The Daily Meal:
How to Navigate an Extensive Wine List
Summer Camps for Food & Wine Lovers
10 Secrets to Perfect Liquor Infusions
Where Your Favorite Foods Really Come From

A Lesson in How to Make Bitters