Behold: the poke bowl, in all its mysterious glory. It's a culinary conundrum that few on the continental U.S. can pronounce. (It's POH-keh, by the way.)

These treasures have long been a staple in the Hawaiian islands for centuries, yet only now are they sweeping the nation as a must-have food trend.

Poke is cooked and raw, hot and cold -- all at the same time. It resembles a beautifully crafted Chipotle burrito bowl, but with a sushi twist; it's both a comfort food and a healthy meal.

And if we haven't convinced you to try one yet, this might: 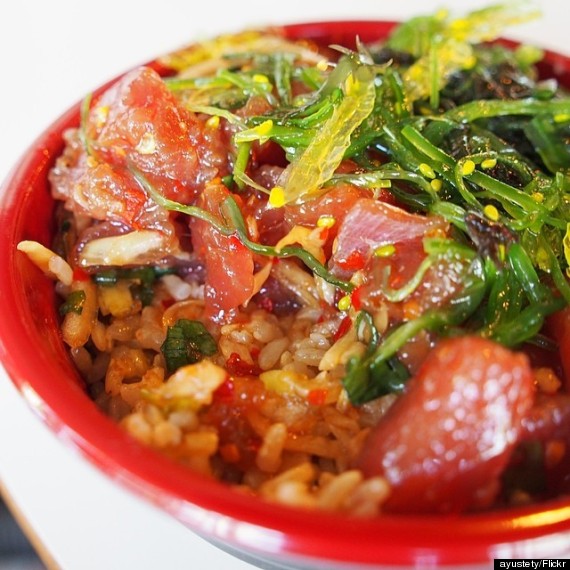 So, just how does one craft their very own tasty bowl of raw, chewy, sometimes crunchy goodness? To find that out, we went to the land from which it came (Hawaii) and asked the experts: Al Cobb-Adams, owner of Da Poke Shack, currently number one on Yelp's Top 100, and chef Andres Bravo, a former sushi chef-turned-private chef for Hale Aina, who was trained at the famed 2-Michelin star Mugaritz and has privately cooked for a lineup of A-list celebs, including Rihanna, Jessica Simpson and Alanis Morissette.

Turns out, it's both surprisingly easy and challenging -- and we wouldn't expect anything less. First, we begin with the basics:

1. The Rice
As the first layer of the bowl, rice counterbalances the fishy taste of the raw poke (which means "to cut into pieces" in Hawaiian). Chef Bravo recommends using white rice, seasoned with rice vinegar and chopped kombu or seaweed.

"Coming from a sushi background, I've learned that rice is very important when served with raw fish," Bravo said. "You want to have a good quality rice." For the highest quality bowl, he suggests using short grain Japanese sushi rice, but regular white rice is also sufficient and can be swapped with brown rice if desired.

2. The Fish
Both chef Bravo and Cobb-Adams agree: Fresh fish is the most important ingredient in a poke bowl. The fresher, the better. Ahi tuna, or yellowfin tuna, is the most common choice used in the islands, but Cobb-Adams suggests bluefin tuna, commonly found on the East Coast, as the best option.

When choosing a fish, consider these three things: smell ("Fresh fish should have a very light fish smell -- almost no smell," he says), color (fresh tuna should be a bright crimson red) and texture (firm to the touch).

Cobb-Adams has also tried using marlin and salmon, and says other fish varieties can be tested. "The fattier the fish, the better it will taste," he says. He also strongly advises against using anything that is farm-raised or frozen. "Fish is one of the last free range meats you can buy," he says, adding that farmed fish are fed man-made foods -- "unnatural stuff" -- which turns the fish meat into "something else."

3. The Cut
Bravo first cuts his fish into filets, "like the ones you see in the window at the sushi bar," he says. From there, he cuts them into cubes. Cobb-Adams says its best to cut "with the grain, not against it," to avoid perforated edges. After it's cut into cubes, salt the fish to taste using Hawaiian or sea salt.

The size of the cube depends on personal taste. "A lot of local people and Hawaiians love the taste of fish," Cobb-Adams says, "so having a big piece to chew on is no problem." People who don't like the fishy taste can opt for smaller cubes to better taste the bowl's dressings.

4. The Poke Sauce And Garnishes
This is where Bravo and Cobb-Adams disagree. Bravo believes that poke should remain simple, like its original Hawaiian form. "It is what it is," he says. "Use super fresh shoyu (soy sauce) and a few other ingredients, preferably locally-sourced, but you don't want to stray too far from there."

Cobb-Adams is more daring in his approach. "You can almost do anything with poke," he says. "You can walk down the aisles of your supermarket and if you think it tastes good, throw it into your poke and toss it. Honestly, whatever tastes good to you."

For Spicy Poke: blend chili peppers with Hawaiian sea salt and a light drizzle of olive oil until it turns into a paste; mix in with mayonnaise and unagi (eel) sauce to taste. (Recipe by Al Cobb-Adams, Da Poke Shack)

5. The Look
"Everything I do is by taste and sight," Cobb-Adams says. "You can have a prime cut of ahi, but if you don't make it look presentable, people will look at it and say, 'That's gross! I won't eat it.' "

Bravo would agree. He says that contrast and color is an important part of a beautifully crafted poke bowl. For his clients, he sometimes adds fried wontons to the bowl to give it a nice crisp texture; sometimes he adds shredded carrot to brighten up the dish.

He also warns against serving the poke flat. "You want to give your dish some height," he says -- thus, a bowl is used. "If you take a spoonful of poke and simply dump it in the bowl," he adds, "it won't look appetizing." To remedy this, form a mound of poke over the rice so that it has a point at the top, like a pyramid.

6. Pulling It All Together
1. Put the freshly cut cubes of ahi into a large bowl, sprinkle sea salt to taste.
2. Add and toss soy sauce or desired sauce to taste, just enough to coat the cubes.
3. Put a scoop of rice in a single serve bowl.
4. Pour the seasoned poke over the rice, creating a mound.
5. Add final touches and garnishing.
6. Sprinkle the bowl with furikake seasoning.

Voilà! Enjoy immediately, while rice is hot and poke is cold.


Make Moderation Your Mindset
Flickr:RyAwesome
"Follow the old adage 'moderation is key,'" says Jeffery Lunak, vice president of culinary at Blue C Sushi in Seattle. "Sushi is meant to be about a few simple, beautifully harvested ingredients put together in perfect balance, and not hidden behind heavy sauces or gravies like a lot of other cuisines." It's also ideal for sharing, which is why Lunak recommends sampling small amounts of several items, such as a few pieces of different maki rolls, a couple of ounces of rice pristine raw fish, miso soup, grilled protein, and a little bit of vegetable. "Have a few items, but in smaller portions," he says.
Start With Edamame
Flickr:elsie.hui
According to both of our experts, edamame is a perfect low-calorie, high-protein appetizer to start with, especially if you request the shelled soybeans to come only lightly salted or skip the salt altogether. "Sushi is going to be a pretty high sodium meal in general," says Tanenbaum, so it's important to look for ways to cut the sodium level down when you can.
Pick A Soup Or A Salad
Flickr:khawkins04
It's also wise to begin your meal on a small fiber-rich veggie-filled green salad (ask for ginger dressing on the side), an antioxidant-packed seaweed salad or cup of miso soup with broth and tofu and vegetables. Though the soup and even seaweed are high in sodium, they're still lighter options that will fill you up and help pace your meal so that you don't overeat. (Just be sure to sip plenty of water throughout to help flush out all that salt.)
Sip Green Tea
Flickr:opyh
Speaking of drinks, Tanenbaum points to green tea as your best beverage bet at the sushi bar. "A hot green tea goes well with sushi and is filled with antioxidants," she says. As in any dining out situation, if you're going to order alcohol, try to stick to just one drink and skip the list of sugary special cocktails -- just one could cost you 400 calories or more! -- in favor of something lighter, like one glass of white wine.
Go Easy On The Rice
Flickr:zackzen
White rice is one of the sneakiest calorie culprits on sushi menus. "Luckily, the average sushi place is a little more progressive in offering wider array of options," says Lunak, who says that it's pretty standard to find brown rice (for the whole grains) or even quinoa available as options in your sushi rolls. Or, do as Tanenbaum does, and "Ask for your sushi rolls to be made with half the usual amount of rice," a request any sushi chef should be willing to oblige.
Stick With Sashimi
Flickr:Luke,Ma
A few pieces of protein-packed sashimi (raw fish) -- about 25 calories a piece -- are among your healthiest bets at the sushi counter. Tanenbaum suggests you skip having your sashimi served on beds of rice, which she says can cause you to eat an entire cup's worth of rice without noticing. With raw anything, cautions Lunak, you should ask about the quality of your fish to be sure you're getting a safe and tasty product. His tip is simple: "Just ask your server or chef where the fish is sourced from and if there's a focus on sustainability. If they can answer right away, you're probably in a good place."
Skip The Spicy Mayo
Flickr:cherrylet
"Be careful with menu items that say 'spicy,' like a spicy tuna roll," says Tanenbaum, because it usually means it contains a heavy spicy mayonnaise sauce. If you do want your food to have a kick, she recommends using wasabi instead of the spicy mayo sauce, and ginger to add another level of flavor when you take each bite. Remember, too, that some rolls (such as eel rolls) are served with a sugary, thickened soy-based brown sauce, which can help pack on the calories quickly.
Be Smart About Soy
Flickr:KaneJamison.com
Soy sauce is usually right in front of you at the sushi counter, and it's okay to dip into it -- but sparingly. "Low-sodium soy sauce is a pretty standard offering nowadays," says Lunak. "Some places even do their own 'home brew' by taking a regular or low sodium soy sauce and combining it with kombu, a sea vegetable, and water to thin it even more."
Beware Of Frying
Flickr:BrownGuacamole
With so many delectable options on a sushi menu, it's easy to steer clear of the items you know will be fried in a fattening batter (and are also typically served with a heavy sauce). Avoid anything made "tempura," for instance, but also be on the lookout for "crunchy" sushi rolls as well. "Or if you want to have a few pieces of tempura or a special crunchy roll," says Lunak, "then go ahead, but keep the rest of your meal light."
More:
Taste Fish Recipespoke bowlpoke bowls