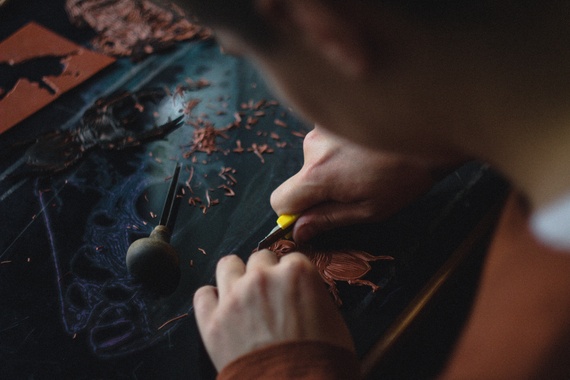 You could make something right now. If you wanted to stop reading, grab a sheet of butcher's paper and brainstorm ideas, you could probably come up with half a dozen ideas for apps, books or products. Ideas aren't the hard part, after all -- just ask Tom Haverford.

You could build a Wordpress site and start harassing your friends to test the concept. You could start writing op-ed pieces on Medium and put "Founder" or "Author" in your Twitter bio within 48 hours. You could throw up a landing page, post the first chapter of a book and start pushing it on Product Hunt.

Where things get tough is when you're trying to make something that people genuinely give a shit about. You don't want your dream to die in the chamber, because nobody read it, watched it, used it or listened to it. The deafening silence surrounding your work can crush your soul.

1. Only Make What You Care About

If you want to make something that people really care about, that they actually give a hot shit about, you have to care about it yourself. Because if you don't, then try as you might, it'll come out in the final product.

The reason for this?

You have to genuinely care, yourself.

The best writing advice I have ever heard was to write specifically for someone I know. It's a genius idea. Every time I go to create something, or build something I think about who I know that would benefit from what I'm doing.

If you have something that you care enough about to make, you have to ask the next question -- who are you making it for? What information do they need? What turn of phrase would stop them in their tracks? What is their single pain point that the product could solve, or their secret story that your novel would be able to touch and cultivate into a real emotional response?

Stop thinking about your audience as a vague concept, a collection of faceless people.
Believe that your audience is a real person with feelings, experiences and a story. It will change your perspective.

You have to know what will make them care.

3. Ask Yourself If You Fit The Project

You need to ask yourself whether you have the courage, the strength, the motivation and the passion to make what you want to make. And I mean really ask yourself, because when you first come up with an idea you can get so caught up in it that you can't see anything else.
It's easy to mistake excitement for passion, motivation and ability.

When that feeling starts to die down, or you get used to it, you can realise that you don't have the real raw power to be able to finish and follow through. That's not a bad thing; there is nothing wrong with recognising that a project isn't right for you. Maybe there's another project that is.
It's not enough just to care about what you're making -- it has to feel right.

Only work on projects that feel right.

4. Don't Do Anything To Be Someone

Have you ever watched one of those reality TV singing competitions? You've probably seen a hundred young people, eyes shining, clutching microphones and talking about their dreams. They'll explain that ever since they were kids, they wanted to be singers.

They hardly ever say they wanted to sing. When it comes down to it, half the time it's because actually singing isn't the end goal. They want the trappings and lifestyle and the breaks of being a singer.

If the act of singing was really their end goal, they wouldn't be on a reality TV show. They'd be out there every night singing anywhere they could, writing songs, starting bands, recording music.

The same is true for anything you could make. Do you want to make X, or do you want to be the person who made X? Because if you don't care about the act of making something, and if you don't want to get out there every day and try to make something, you might as well quit.

They should care about your work. Not you.

If you want to write a book that can break someone's heart -- work hard.

If you want to start a business that changes the world -- work hard.

If you want to draw a comic book that expresses everything you are, and dream about -- work hard.