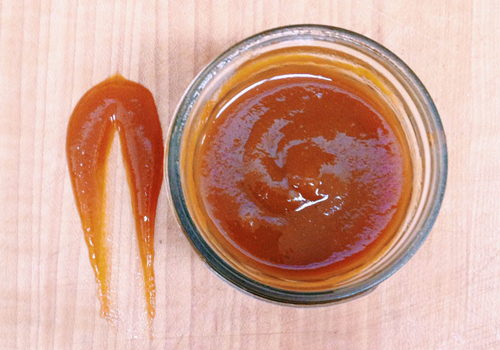 When Brad Leone, our test kitchen assistant, told us that his thick homemade caramel sauce had only one ingredient, we didn't believe him. Because, of course, he was LYING. It has two ingredients: water (which, fine, Brad, we suppose that doesn't really count) and sweet potatoes.

Yep, you can make a silky, sweet caramel sauce using just sweet potatoes, as Brad learned by accident one day. He was done roasting a batch of these naturally sweet, starchy root vegetables when he noticed that they weeped liquid in the oven. So he put some of those bad boys in a cheesecloth, squeezed really hard, and wound up with enough orange-hued liquid to reduce in a saucepan until it was the thick, creamy texture and deep color of caramel.

And damn, it's good -- eaten straight with a spoon (as we first experienced it) or, as Brad suggests, atop roast pork.

SEE MORE: How to Make Brittle Easily--Without a Candy Thermometer

"I like that it retains the earthy flavor of the sweet potato," he says. "But if you wanted to, you could add a little butter and sugar to sweeten it up even more. I'd put it on ice cream and brownies, or thin it out with a little water and use it as a glaze on ham."

Brad is known for his craftiness with ingredients, but this vegan, one-ingredient condiment might take the cake. Or top it.

Preparation
Preheat heat oven to 425 degrees. Place chopped potatoes and 1/2cup of water into a 9-by-13-inch baking dish, covered with foil. Bake for 1 hour covered and 15 minutes uncovered. Remove dish from oven and add remaining half cup of water to loosen up any bits in the baking dish.

Place all the solids and liquids into a strainer lined with cheesecloth. Let drain into a saucepan and cool for 30 minutes. Once cool enough to handle, squeeze as much liquid out from the potatoes in cheesecloth as possible. You should end up with a cup and a half of liquid.

In a saucepan, bring the sweet-potato liquid to a boil, then reduce heat for a steady simmer. Allow the liquid to reduce for 15-20 minutes until it starts to thicken and starts to form a caramel; stir often in the final minutes. Pour into a jar and in store the refrigerator for up to 2 weeks.

Can be served with roast meats or as a sauce over ice cream or brownies. Oh, and don't forget to eat the leftover sweet potato mash!

See more from Bon Appetit:
10 Candies Adults Love But Kids Hate
25 Ways to Use Sriracha
8 Foods That Could Kill You
21 Recipes for Dutch Ovens