Do your goals ever feel impossible?

Like, it doesn't matter how hard you work, you don't get much closer?

If you're like most people, when you're not getting the results you want, you increase your efforts.
Unfortunately, this approach rarely works. More often than not, you're left feeling powerless over the outcomes of your life. Willpower is a broken concept. 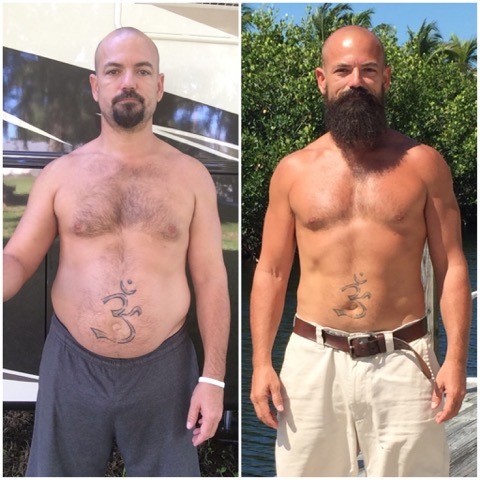 Jason Moore has struggled with his health for 20 years, despite being a well-versed expert on dieting and nutrition.

He has experimented with numberless diets. His lack of progress hasn't been due to laziness. His biggest problem was that he relied too heavily on willpower -- trying to control his dieting and workouts.

However, last year, he implemented something that has radically altered his results in his health, and by extension, all other areas of his life.

Unlike willpower, where the focus is to try harder, commitment is making a declaration about what you're going to do, and following through.

What Jason discovered is that, over the years, he had developed a weak relationship with commitment. He couldn't trust himself to actually do what he said he would do. Eventually, he was so weak at commitment that he became afraid to make any commitments at all.

However, when you fully commit to one thing, it trickles over to the other areas of your life. Allowing you to develop a strong relationship with commitment.

For Jason, he needed something big to commit to. He signed up for an Iron-Man Triathlon. Small goals, 1-3 months out weren't a big enough commitment for him. Interestingly, smaller commitments were easier to break. He needed something way outside his comfort zone.

In order to ensure he followed through with his commitment, he needed a higher level of accountability. He made his goal completely public by posting shirtless pictures of himself on Facebook with a declaration that in one year, he will be an Iron Man. He hired a coach to keep him accountable to his plans.

In his own words, "I called my results into being by the conditions I created. My results became inevitable because of how I set things up."

According to productivity expert, Eben Pagan, the next evolution of goal-setting is going to move away from focusing on will-power and outcomes. Instead, the focus will shift on creating conditions that make it impossible for you not to achieve your goals.

Pagan calls this concept "Inevitability thinking," and it's how Jason Moore has overcome the health hurtles he's been dealing with for decades. According to Pagan, "Inevitability Thinking is thinking and acting as if what you are doing is a forgone conclusion because you set up the conditions for it to happen."

How can you set up conditions in your life to make the outcomes you want inevitable?

Say you want to wake up early to go to the gym. So you set the goal to go to the gym and set your alarm clock for 6 a.m. You've tried this before, right? How long did it last? Probably not long. You're still focused on effort and willpower.

Instead, you could create conditions that make getting to the gym in the morning inevitable. You could get a gym partner who picks you up at 6 a.m. In these conditions, it's very unlikely you won't get up.

When Jason signed up for the Iron Man, posted pictures of himself on Facebook, and hired a personal coach, he set up the conditions to make his success automatic. In other words, he won the game first, and then started playing.

Similarly, becoming a foster parent was purposefully setting up conditions in my life that required me to show up at a higher level. Before I became a foster parent, I struggled to be motivated to write. Even though I wanted to become a writer, I procrastinated.

However, after I became a foster parent, I couldn't not write. I realized if I'm serious about becoming a writer, the time was now. I couldn't waste any more time. My new conditions automated my success. They challenged me to remove everything from my life that was non-essential. They forced me to commit to a higher level. As Robert Hales has said, "When you cannot do what you have always done, then you only do what matters most."

How you set things up determines everything you will achieve in your life. Most people fail to commit big, and thus fail to achieve big. Additionally, most people's external circumstances are in direct opposition to their goals. They're constantly treading upstream. They're burning themselves out and getting nowhere.

When you set things up consciously, you win before you ever begin playing. Your results are inevitable. Success becomes automatic.

Husband and foster father of 3. Pursuing Ph.D. in Organizational Psychology.