When I was single, I would imagine my future children; children whose names I had long ago picked out while daydreaming during classes in college. What I didn't factor in was that my future husband might have an opinion. Or, more accurately, that he might disagree with my choices. 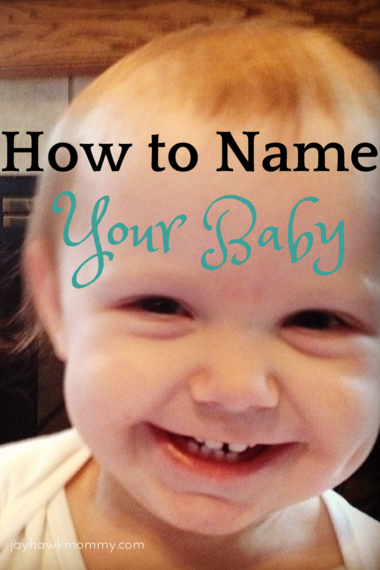 Why, oh, why, must our significant others feel like they should have a say in the name of our children? Don't they know that most women have names picked out long before they even date, much less get married? It goes hand-in-hand with planning our weddings.

I first learned that my husband, Chris, would not be easily swayed to my way of thinking when I was pregnant with my oldest. We had decided not to find out the sex of the baby until it was born, so coming up with a name became doubly hard. When I told Chris that I loved the name Gabriel for a boy, he rejected it outright. He did not like it. The name Virginia? Well, he wasn't sold on it. He needed to think and decide on his own.

I panicked! I needed to convince him that the names I picked were perfect for our unborn baby. I had nine months. I could do it.

It was then that I developed a system for us to pick out names. Here are my six easy steps on how to name your baby:

1. Decide on the middle name first.

If your spouse wants you to name your child Ambrosius and you hate the idea, then encourage him to make Ambrosius the middle name. Win-win. You don't have to call your child that unless he gets in trouble, and your husband gets the name he wants.

There are plenty of baby name websites out there, but it is hard to sort through all the possible names. And, honestly, can you trust a website that suggests a name like Ocean?

3. Go through the book separately.

Make sure you buy the book and read it before your partner is fully aware. It is easier to do a blitz attack this way. (Just kidding. Kind of.)

My husband and I agreed that if either of us absolutely hated a name, it was out of consideration (and that is how Gabriel got eliminated). I crossed off names I hated, starred the ones I loved, and put question marks on others. Then, my husband went through and did the same. In the end, we had a list of about 30 names for girls and 15 for boys.

Nothing says you must have a name at your 20-week-ultrasound. There is plenty of time to figure out the names. We would put aside the names and revisit them. As we did so, we found there were some names we didn't like as much as before.

5. Rank the names in order of how much you like them.

Make sure you put that name you want more than anything on top, then be ready for the gut-wrenching discovery that your spouse doesn't want that name as much as you do. At this point, the name I really wanted was at the top of my girls' name list. It was in the middle of his. I knew then that I had to put on the hard sell. After all, it was the name of my dearly-departed grandmother. Surely he would change his mind. Right?

6. Decide in the birthing room!

I know there are some who choose the name before they have their baby. We didn't do that. We wanted to meet our baby first and see what name fit best. Besides, we still were undecided on a name. At this point, we had the names narrowed to three female and three male names.

After my c-section was done, my husband brought over our beautiful baby girl for me to see. Vulnerable, having just given birth, I looked at my husband and asked if he knew what he wanted to name her, making sure to bat my eyes at him. He gazed at me and then said, "Let's name her Virginia." I wanted to shout out and do a happy dance, but didn't want him to change his mind (besides, I couldn't move from the waist down due to my spinal). So, in the end, we named our oldest after my grandmother.

Your partner will be putty in your hands after giving birth to your child, so the birthing room is the best place to finalize the name. Well, most of the time.

More:
Baby Namesparents-pregnancybaby namingParentsPregnancy
Newsletter Sign Up
Raise the kind of person you'd like to know
Subscribe to our parenting newsletter.
Successfully Subscribed!
Realness delivered to your inbox

An over-40 stay-at-home mom who writes about motherhood and life as she sees it at http://jayhawkmommy.com