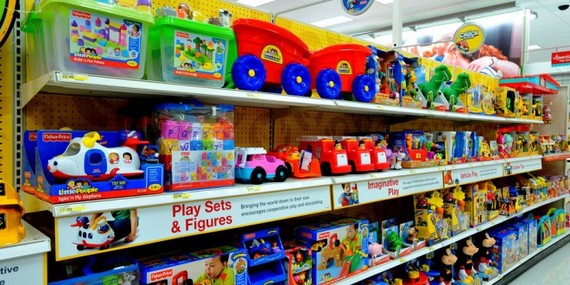 As you've surely heard by now, either via news reports or your homophobic aunt ranting on Facebook about how this is yet another sign of the end times, Target has announced they are no longer labeling their store toy aisles by gender. No more pink section marked "girls." No more blue section marked "boys." No more signs announcing that dolls are for girls and toy guns are for boys. Here's what Target said in its official announcement of the new policy:

Right now, our teams are working across the store to identify areas where we can phase out gender-based signage to help strike a better balance. For example, in the kids' bedding area, signs will no longer feature suggestions for boys or girls, just kids. In the Toys aisles, we'll also remove reference to gender, including the use of pink, blue, yellow or green paper on the back walls of our shelves. You'll see these changes start to happen over the next few months.

Many people are rightfully celebrating this decision. But alas, a vocal contingent of homophobic aunts has decried the new policy as "confusing," "un-Christian," and "reeking of the gay agenda," and have vowed to boycott Target as a result.

Listen, I totally get it. Trying to buy your kid a toy without knowing if that toy is for girls or boys is a truly terrifying proposition. What if you accidentally buy your precious little girl a toy that makes her feel smart and brave and curious? What if, GOD FORBID, the lack of clear signage causes your son to want a baby doll, and then he grows up to be a nurturing, caring father? UGH. GROSS.

Target's lack of gender signage is obviously a sinful, confusing disaster. You should definitely never shop there again. But just in case you ever need to buy a gift for your kid and Walmart is closed, here are some tips for how to navigate the godless dystopia that is the new unlabeled toy section of Target:

1. Figure out the toy's gender the old-fashioned way.

A common refrain of people protesting Target's decision is "How will we know which toys are for girls and which are for boys?" and it's a valid concern. Luckily, there are steps you can take to deduce the gender of any toy. Sit the toy down somewhere free of distractions (a vacant interrogation room at any police headquarters will do) and ask it a series of questions that will definitively reveal its gender: Do you like hunting and fishing and porn and football and beer? Do you like cupcakes and shoes and makeup and Pinterest and being a pretty princess? Do you think periods are gross? Do you watch Bravo? Have you ever used the phrase, "My buddy has a boat"? Do you base your self-worth on your dress size? Do you think Bill Cosby's accusers are just looking for attention? Have you ever bought a candle?

Some toys are going to be evasive, but keep at it: Within a few hours, you'll break their tiny toy spirit and have your answer.

Your kid might not know how to use the toilet or spell their own name yet, but hopefully, through your tutelage and exposure to ABC Family sitcoms, they've already learned the most important life skill of all: how to identify and categorize binary gender roles. To figure out which toys are for girls and which are for boys, just ask your son or daughter to point out which toys they like! If you have raised them to be patriotic Americans, they will always choose the toys associated with their assigned gender.

Now, keep in mind that this method can easily backfire if your kid is one of those butch girls who likes Legos or one of those nancy boys who is into baking. If that's the case, it's up to you to tell your kids that they are weird and wrong, because Target's toy section signage will no longer do it for you.

Generally speaking, if a toy is focused on nurturing new life, like a baby doll or a newborn litter of fuzzy puppies, it's for girls. If the toy is modeled on an arbiter of death, like a tank or a machine gun, it's for boys. Simple as that! Next time you're holding a toy in Target's unlabeled toy aisle, wondering if it's for girls or boys, just ask yourself, "Could the real version of this toy be used to carry out a massacre in a movie theater?" If the answer is yes, it's the perfect gift for your little boy!

So there you have it. If you are ever forced to buy a toy at Target, refer back to these tips to guide you, and be sure to make a few extra mean comments about Caitlyn Jenner on Facebook afterwards, just to even things out.

11 Questions People Ask You When They Find Out You're From Portland
11 Spiritual Affirmations For Retail Workers
The (IT'S NOT A) BABY Belly!