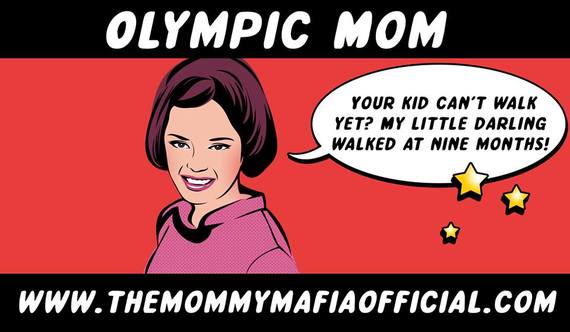 We've all met Olympic Mom. She is the ultimate competitor. If medals were awarded for motherhood, she has her sight set on the gold. If your baby started to talk at 14 months, her baby started at 11 months. Everything is a competition, from teething to toilet training. Olympic Moms is not necessarily athletic in a physical sense. But she is athletic in every other way. She is the mom that no matter what your child has achieved, her child did it earlier, faster, better. If your 12-month-old is not walking yet, Olympic Mom will tell you that her child walked at 10 months and there must be something wrong with your kid. If your kid said his first word at ten months, Olympic Mom's kid said his first word at eight months. You get the drift.

Settle for the Silver

The only mom that comes close to attempting to compete with Olympic Mom is Multiple Mom. When Olympic Mom announces that her children were born 12 months apart, a brave twin mother might quip, "Well, mine were two minutes apart." Olympic Mom might pause for a moment before saying, "Giving birth to two babies is easier than giving birth to one baby because twins are always smaller."

Olympic Mom also loves talking about her birth stories. These stories always seem to lurch dramatically from one extreme to the other. From, "My labor lasted two days and I had no drugs! I nearly died and had to have a blood transfusion," to, "I just seem to pop these babies out. My body was born to breed! He was born in 45 minutes and two hours later, I was back in my pre-pregnancy clothes again." Sleep is another issue that Olympic Moms like to brag about from both extremes. It's either, "My girls never sleep. I'm up and down all night like a yo-yo. I survive on three hours sleep a night!" OR "I have a better night's sleep now that I'm a mom than I ever did when I was without kids. My little angels sleep all night through."

How to Outwit the Usain Bolt of Motherhood

So, how do you outwit an Olympic Mom? There are three well-tested strategies.

1. Always be prepared with a comeback. If she mentions that her little darling got an "A" on the Math test and is currently the dux of the school, while your little darling struggles with the five times table, hit her back with anything you know your child is good at -- 'My little darling made a flamingo in origami class that was so beautiful it's going to feature in an origami coffee table picture book.' Anything.

2. A lawyer friend of mine has a great way to deal with any annoying or awkward confrontation of any kind. When presented with a statement that she doesn't really have a comeback for, her reply is always a simple, 'So?' Try it.

3. You can always try what I always fail at -- keep your mouth shut. Or just nod your head. Silence is golden. Do not try to compete with an Olympic Mom. It's a race you will never win.

LJ Charleston is an Australian journalist and author of The Mommy Mafia: The Urban Dictionary of Mothers. She is a self-confessed ER, Olympic & Chardonnay Mom. @themommymafia www.themommymafiaofficial.com

More:
MotherhoodParenting Bragging RightsParentsMommy Wars
Newsletter Sign Up
Raise the kind of person you'd like to know
Subscribe to our parenting newsletter.
Successfully Subscribed!
Realness delivered to your inbox