I stare at a blank screen, my fingers hovering over ASDFJKL;. The cursor taunts me with its consistent blink, blink, blink.

Resistance... the plague which stops creators from creating, stops writers from writing, stops changemakers from changing, and stops entrepreneurs from launching.

Have you ever come up with an idea and felt such an incredible rush of adrenaline that you needed to grab the dinner napkin and nearest pen so you can scribble down the thought in your head?

What happens so often though is that we come up with these ideas and then just as they rise in a mist of fury, they just as soon fizzle as the resistance blows in like a trade wind.

My point in a shareable tweet: "Learn to recognize the resistance and say, 'No, thank you. I'd rather move onward." 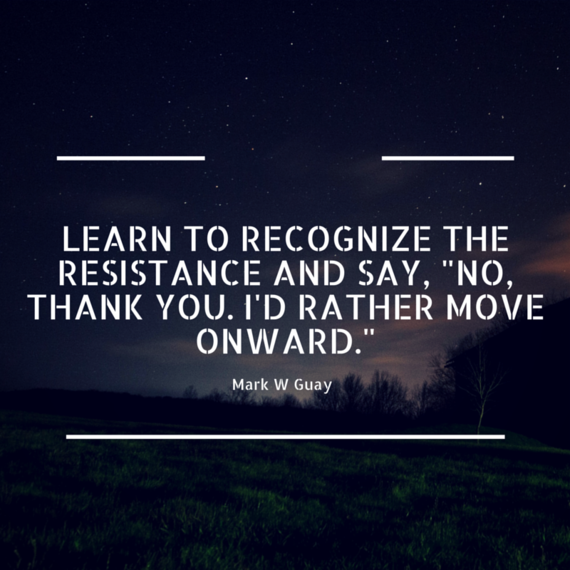 The resistance is the voice inside that says, "Well, that will never work" or "That's just stupid," or it's the friend or family member who literally says that to you.

Resistance is the fear of failure, of falling on your face, of being told no, of feeling stupid.

When I was at Stanford's design school where I learned the design thinking method, they had us jump on a little trampoline when we were thinking of ideas. This helped us think more like a little kid and shut the resistance down because heck, when you're jumping on a trampoline, you look ridiculous already so why not spout out any ideas that come to your head?

But we don't always have a trampoline to jump on, so here are a few lessons I share on the podcast, Your Life on Purpose, on how to overcome the resistance and create meaningful work in your life while staying true to your purpose.

Your cocoon is my cheesy metaphor for the inner circle of your connections. These are the people who you've opened your heart to. Family, friends, lovers tend to be in people's cocoon. Make sure that the people in your cocoon empower you to be the person you want to be in your life. They don't have to agree with you, but they should make you feel supported and loved.

Seth Godin says that it's also really important to have MBA-types of people in your cocoon. These are the type of people who will empower you and support you, but will also play out what may work and what may not work. Or what will have more meaning.

Anthropologists often use a term called cultural relativity. It basically means that what makes sense to one culture may not make sense to another. That's why when you travel to a completely different culture, you get culture shock. I know when I joined TOMS on a shoe giving trip in the Dominican Republic, I experienced a beautiful culture shock and it got me to think different.

Here's an experiment. Walk on the opposite side of the sidewalk the next time you walk somewhere. If you're in the United States, that would be the left side because everyone walks on the right and drives on the right. People will bump into you and it will probably be difficult to walk. That's because you are going against the culturally defined normal. Feel the resistance? Experience the feeling here and notice how hard it is to go against the resistance. After you stop walking, imagine that you are transported to one of the many countries who walk on the opposite side of the street. There you'd be normal. Eh?

Keep this in mind whenever someone bashes your ideas or values. Just focus on being you.

I suck at saying no because I'm a people pleaser at heart. Thing is, when I do that it's easier to ignore my own desires and values. Sometimes, you have to say no to others to focus and follow your own path.

I am definitely not a perfectionist. Thankfully, I'm married to one. I am a will-get-it-done kind of guy and like the Facebook company's motto: Done is better than perfect. If I keep stalling on something, I'll never take action. It's so easy to be buried in our own internal dialogue and never taken action. Sometimes, we just need to get out of our own heads.

Consider what Hamlet once said, "Conscience makes cowards of us all." Conscience, Hamlet argues, prevents action and I'd have to agree with him on that. I wouldn't take any more advice from Hamlet though.

Think of it as a rough draft, a warm up, or dipping your toes in the water. In design thinking, prototyping is where you build something real quick to test your design. In films, they have a b-roll where they show a film to a select audience before making final edits. In product and software design, there's usually a beta feature where a select audience tests the waters before the team makes final edits. Use the concept of prototyping to take action whenever you feel resistance, especially if you're a perfectionist. Create something real quick, give it out to a controlled select group, and then learn from feedback to make your design better. By the way, I am terrible at prototyping and have learned the hard way that prototyping is so, oh so, needed to create something of high quality.

To gain a wider perspective and bring this full circle, I asked a monk, a poet, a therapist, an entrepreneur and a television show host how they overcome resistance. Here's what they had to say:

"To me, Resistance is the new Awesome. It's not a problem, it's a project to be worked on. Energy flows where you put your attention, thoughts and words. Focus on your resistance and you only feed it more. Instead, focus on your Vision and your Why. Focusing on the WHAT I should do, WHEN I should do it, or HOW I should be doing it before knowing WHY I do it only adds to the resistance."

"Resistance is a necessary energy to achieving your purpose. The friction that creates resistance comes in many forms, fear of failure, self-doubt, lack of getting that YES. The best way in my experience to deal with resistance is to take a step back and ensure you are aligned with your true purpose."

"Resistance, I liken it to child birth, when you feel the pain coming your first instinct is to tighten up, freeze or run to a drug to numb the horrific pain. But when you feel it coming, if you can go 'into' it, and actually tell yourself 'I know you're here and now I release you to carry on,' the contraction comes and goes in a more bearable way."

"If I waited for inspiration to strike, I would never write more than a few words a month."

"Resistance is a friend who is often misunderstood. It often visits right before a breakthrough. It's not telling you to stop, it's just telling you to grasp yourself for something big!"

"Resistance, once you identify it and work through it, leads to great self-discovery on the other side."

What's your relationship with resistance? How do you overcome resistance to stay true to yourself? Have you identified where the resistance is coming from? Have you learned to reject resistance, like Colin suggests, and focus on creating?

Like what you are reading? If you'd like to join my newsletter where I share empowerment tips from conversations I have on The Traveling Cup, you can do so by clicking here.

I also created a free life-plan template you can download that has more tips like this and a 10-minute per episode micro-podcast to go with it.