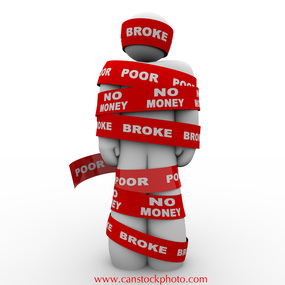 Money is the #1 worry for Americans, according to the Stress in America survey released by the American Psychological Association. And here's the problem with stressing over money.

The stress from worrying about money can lower your IQ by 40 percent. That's nearly half your smarts, which means you'll lack the cognitive and creative capacity to not only resolve your current lack of cash, but also to carry out a plan to lift you out of debt and scarcity.

Compounding matters is that people with diminished IQs tend to be less happy and in poorer health. Thus, your attitude is likely to be pessimistic and your energy low, with the brain circuits in charge of creative problem-solving switched off. Your stressed brain locks into a vicious stress loop, making you perform the same unproductive things over and over, instead of coming up with a better idea, which is why you never seem to get ahead.

YOU CAN CHANGE THIS PICTURE

You can recover the brain power to move your life forward, even in the midst of a cash flow crisis. Raising your credit score starts with lowering your stress level, and it's simpler than you might imagine. Abraham Lincoln said, Let no feeling of discouragement prey upon you, and in the end you are sure to succeed.

Consider Ursula Burns. She was raised by her single mother in a housing project on the Lower East Side, back when the Lower East Side was an impoverished neighborhood with a scarcity of opportunity to advance. Ursula and her mother didn't let the lack of money dampen their attitude or vision. Her mother ironed shirts to put Ursula through college, and Ursula kept her eye on the prize. She is now the CEO and chairwoman of Xerox, and the first African-American woman to run a Fortune 500 Company.

The journey from the poverty of the Lower East Side to the boardroom was not launched and propelled along by a stressed brain losing IQ. It was fueled by a can-do attitude. Ursula Burns says, The best way to change it is to do it ... And then after a while you become it, and it's easy.

Taking the stress out of a financial problem is so simple you might initially think it couldn't possibly work. Research proves otherwise. Click here for the three things you can do to make this change.

More:
brainMoneyStresscreativityFinancial Crisis
Newsletter Sign Up
Everything you should have learned in school but didn’t
Subscribe to HuffPost’s money and living email.
Successfully Subscribed!
Realness delivered to your inbox