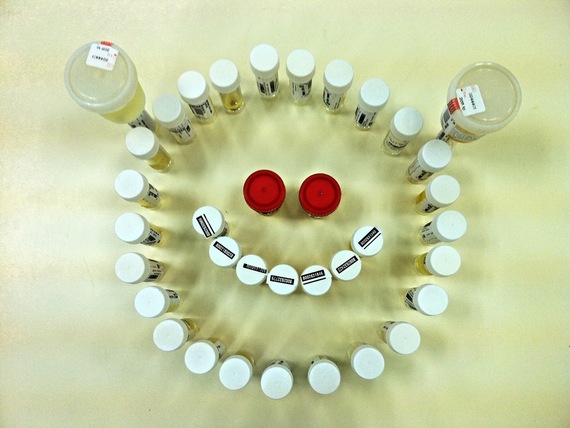 Drug testing, like heroin, got popular in the late '80s and early '90s. As Reagan's Drug War rushed towards its logical conclusion, employers hustled to create drug-free work environments despite a lack of evidence that there was any advantage in it or that tests actually worked. Now, as the legalization movement gains momentum, tests to screen for marijuana use seem outrageous, but they remain relatively common. Plenty of businesses still require a piss test and plenty of would-be employees still struggle to pass.

There are cleanses and adulterants that promise to remove all traces, but many are scams guaranteeing the impossible, the complete removal of evidence from a healthy human system. To get a handle on what can be done on a deadline, Inverse asked Rafael Landeiro of Mobile Health, a lab testing service, what methods might hide all that THC.

THC is stored in body fat, which is why it stays in the body for up to 30 days after smoking up. (Harder, water-soluble drugs like coke, meth, and opiates get flushed out within three days.) Is burning up the evidence as easy as burning calories?

While it's true that having a consistently active lifestyle speeds up THC metabolism, suddenly hitting the gym before your test isn't going to do much. In fact, it might work against you.

"When the sedentary person decides, 'I wanna beat this,' then goes to a sauna or starts doing a bunch of jumping jacks, it won't really do much," says Landeiro. "Ironically, for the people who are doing that, as your body metabolizes the body fat, you're releasing more THC than you normally would."

"Detox" is just a marketable way to say "piss it out." The detox solutions notoriously sold at GNC and head shops are packed with diuretics and laxative herbs like dandelion, echinacea pupurea, and alfalfa. It's the same idea behind drinking obscene amounts of cranberry juice, another well-known diuretic.

The hope is that stimulating urination will help you flush out metabolized THC in your system. But if you're a regular smoker, chances are your body is continually releasing detectable amounts from its fat stores.

"There might be a biological small windowframe, where you're going to pee at the right time and a fresh new set of urine comes through that doesn't have anything or very little," says Landeiro. "The people who benefit the most from all of this are really the occasional small-time users who probably don't have much to fear."

For habitual smokers, there may just be too much weed to flush out. The better bet is to cover it up. Maskers load up the urine with vitamins and specific chemicals to draw attention away from everything else that's going on in your pee.

But any sober lab tech would notice if certain naturally occurring substances in your urine weren't within the normal physiological range. Maskers often boost levels of creatine, a substance normally consumed via meat and fish. Large amounts of creatine are going to raise eyebrows.

"If it's too low, it's diluted," says Landeiro, "and if it's too high, then either you ate an entire cow or you did something to ingest an abnormal amount of creatine."

Stories abound of people dipping a fingerful of bleach, hydrogen peroxide, or ammonia into their urine sample to "kill" the drugs, as if they were some kind of household bug.

"No healthy human would have bleach in their urine. Or hydrogen peroxide. Or ammonia." says Landeiro. "The internet's a wild place."

One New York-based biologist, who asked to remain anonymous for professional reasons, told Inverse that when it came to cheating a piss test, synthetic urine was the way to go. The right formulas, he says, get all of the physiological protein levels right, together with color and pH, so it doesn't set off a lab tech's alarms. Just heat it up, strap it to your leg, sub it in, and you're, well, golden.

Landeiro admits that new chemicals can beat the system, but not for long. "Can someone pharmaceutically develop a liquid substance that matches every single criteria? I'm not going to say it's impossible for chemistry," he says. "But the fact that it exists and it's out there means that the labs are researching how to catch it."

Temperature, he says, is an instant giveaway when it comes to bootlegged urine, whether it was bought online or forced out of a friend. Thermometers on collection cups detect inconsistencies right away.

Besides, when it comes to smuggling in samples, labs have seen it all. Landeiro said he's seen a woman try to hide a urine sample in her beehive hairdo. "We noticed," he says. "Like, ma'am -- you have a cup of urine on your head."