Considered by many to be one of the body's most primal movements, deadlifting has been around ever since we hauled dinner back to the cave. At first glance, it doesn't look like a super-complicated move, but deadlifts use nearly every muscle group in the body. It's a hip-dominant exercise, so it's great for targeting the glutes, hamstrings and lower back (sometimes referred to as the posterior chain), but it also works the quads, abdominals, upper back, arms, forearms and shoulders. By strengthening so many muscle groups, deadlifts also help prevent injury in the knees, hips, ankles and lower back. They're also a great all-encompassing core move, engaging more than just the abdominals -- deadlifts engage your lower back and the supporting muscles around the waist and hips responsible for correct posture.

When one exercise works that many muscles, it's not just a great calorie-burner, it also boosts production of beneficial hormones such as testosterone and growth hormone -- chemicals that make it easier for the body to lose fat, build muscle and even fight disease. Basically, it's the everything exercise.

Ready to chalk up those hands, head to the bar and get lifting? We're here to help with step-by-step basics, deadlift variations and solutions for common mistakes.

Disclaimer: While the deadlift is an especially important move to add to your routine, this is a movement that places direct force on the spine. Those with back issues (or those who suspect they may have back issues) such as herniated discs and sciatica should first seek medical clearance. 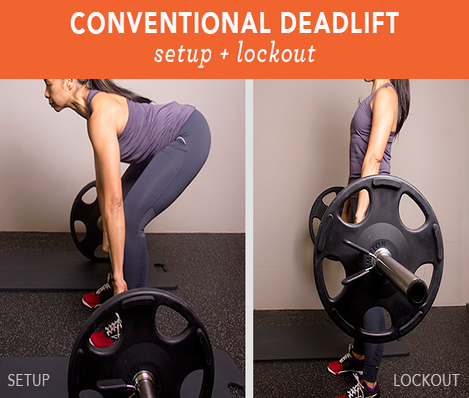 1. Stand with feet slightly wider than shoulder-width apart, toes pointing straight ahead or slightly outward (no wider than 11 and 1 o'clock). The balls of the feet should line up under the bar. How much weight to use is up to you, but it's best to start with a low weight or no weight at all until you feel comfortable with the move.

2. With knees slightly bent and hands gripping the bar slightly outside of legs, hinge forward from hips. Use a hook grip: When you place your hands on the bar, wrap your first two fingers over your thumb, sandwiched between your fingers and the bar. With the bar close to shins, keep head up, eyes looking forward, chest out and back flat. Inhale. 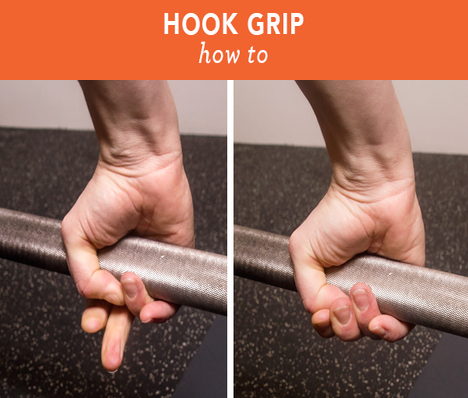 3. Keeping the bar close to the body, exhale as you work to straighten the legs -- drive through the heels, not the toes -- and bring the weight up past knees. Keep core engaged throughout the entire movement (this helps protect the spine) and finish by thrusting the hips into alignment with the feet and squeezing your glutes. Constricting the butt muscles will complete the hip extension and bring the pelvis to a neutral position.

4. Once the bar is past the knees and the arms are straight, gently rest it against your thighs and maintain a straight back, without rolling shoulders back. You can pause here for a few seconds to add an isometric dimension to the exercise, which can help provide bigger strength gains.

5. Maintaining a straight back, slowly hinge forward at the hips (allow knees to bend a little at the same time) and lower the bar back to the ground. That's rep one. 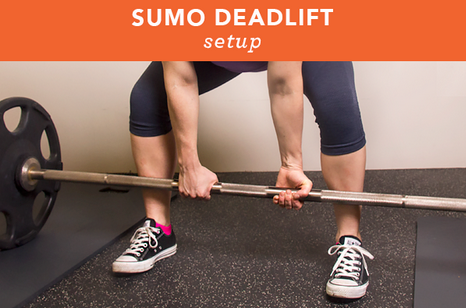 Awaken your inner sumo wrestler with this exercise (traditional sumo attire optional). This deadlift variation has a wider stance than the conventional kind, and though it may be easier and feel more natural for some lifters, it actually requires more mobility. Because of the wider stance (the feet are near the collars of the barbell, so shins are slightly past perpendicular to the bar), different muscles are targeted -- the more the knees are bent, the more the quads, hip adductors and glutes work. But if the deadlift is performed with straighter legs, the hamstrings and trap muscles work harder.

Trap Bar Deadlift
Research suggests the trap bar (aka hexagonal barbell) provides more range of motion in the hips than a straight barbell, which is, ya know, straight. This variation carries a much lower risk of the bar hitting the shins, and the body assumes more of a squat position than it does with the conventional deadlift. As a result, trap bars allow for significantly more quad activation than deadlifting with a straight bar, and lifters can usually pull more weight this way. This is a better variation for those with (or those who fear) lower-back injury because there's less loading on the spine. But if your ultimate goal is to achieve maximum back and hamstring engagement, then the conventional straight bar deadlift is a better choice.

Romanian Deadlift
Not just for the Romanians, this deadlift is performed with relatively straight legs -- the knees are soft, but not bent nearly as far as they are during the conventional deadlift (as a result, the bar doesn't actually touch the ground in between reps). With this variation, the lower back bears a lot more weight, so be mindful of any pain or weakness in that area.

Clean-Grip Deadlift
Time to get down and dirty with the clean grip! This variation -- often employed by Olympic lifters -- requires a much deeper knee bend than most deadlifts. Like the trap bar deadlift, it's similar to a squat and targets the quads and glutes more than the hamstrings. But since it's performed with a regular barbell, there's a higher risk of scraping the shins when legs get tired, so pay careful attention and wear long socks or pants as a barrier. By squatting lower and keeping the chest more upright, this lift also puts slightly less strain on the lower back. 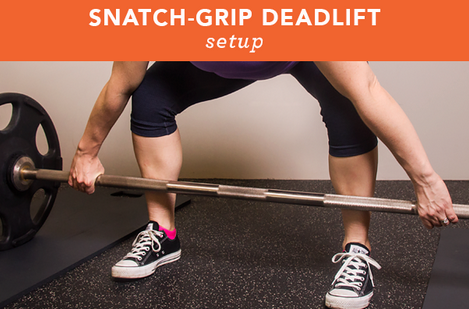 The snatch-grip deadlift is very similar to the clean-grip deadlift, but the grip is much wider. It should be as wide as feels comfortable, but start with a lower weight than you may use for a conventional deadlift, since this variation targets slightly different muscles, particularly in the upper back. Because of the wider hand placement, the hips end up lower than in a clean-grip (but aim to keep the shoulders higher than the hips and the hips higher than the knees from the start). Successful snatch-grip deadlifts may depend on heightened flexibility in the wrists and shoulders and can be more difficult for those with shorter arms. 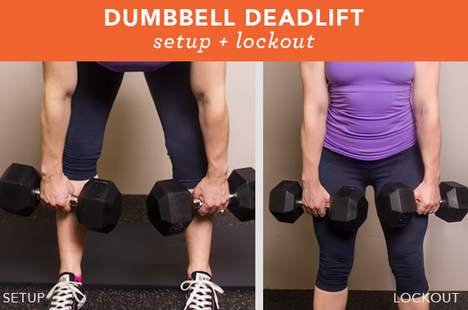 Don't have access to a barbell? Try using dumbbells instead. The movement itself (and the muscles targeted) is very similar to the trap bar deadlift, since the weight can be positioned to the side of each leg. This move can be made more challenging by performing the movement single-legged.

The Most Common Mistakes And How To Fix Them
The Mistake: Keeping the bar too far away from the body.
The Fix: Keeping the barbell closer to the body while deadlifting may enhance performance and minimize injury risk. To ensure the bar is at a safe and comfortable position, roll it up as close to the shins and quads as possible without touching the body.

The Mistake: Rounding the back.
The Fix: Assuming a hunchback is a recipe for deadlift disaster. While rounding the back may seem like a helpful strategy for lifting heavier weights, it's much safer to keep the spine neutral (which includes the head and neck). Note: Make sure not to hyper-flex the back at the end of the move (by letting your lower back dip), which can put undue force on the spine.

The Mistake: Pulling with the back.
The Fix: Rather than pull with the back and arms during a deadlift, push through the heels and force the hips forward until the bar is at knee level. As you raise the bar, work to thrust the hips until fully standing. This is a hip-dominant exercise; pulling the weight throughout the movement can strain the back, so emphasise thrusting the hips rather than yanking backward with the legs and shoulders.

The Mistake: Rolling the shoulders.
The Fix: Rolling shoulders at the top of the lift can be pretty damaging -- while shoulders are a super mobile joint, they aren't very stable -- especially with heavy weights. Since our leg muscles can typically bear more weight than the upper body, drawing the shoulder blades together can put too much stress on the shoulders and upper back. Next time you take to the bar, make sure to thrust those hips at the top of the movement and work toward a neutral spine rather than a curved one. And when you're in the lockout, try not to pull your shoulders back or puff out your chest.

The Mistake: Starting the move with the hips too low.
The Fix: If the hips are too low during a conventional deadlift, the bar will probably smack into the shins and knees. Though most squats should be performed deep, the conventional deadlift does not require sitting super-far back into the hips. The knees should bend just enough that the hands comfortably grip the bar without the back hunching.

The Takeaway
Deadlifts aren't easy to perfect, and it can be hard to keep track of the intricacies of the movement, especially when starting out. We recommend training with a partner or trainer who can keep an eye on your form, and it's never a bad idea to make a video recording of your deadlift to study later. Happy lifting!

More from Greatist:
55 Must-Follow Twitter Accounts Guaranteed To Make Your Day
The Best (And Worst) Positions For Sleeping
5 Core-Strengthening Moves For Yoga-Ready Abs