When Jay Olson was a 5-year-old living in Vancouver, British Columbia, a magician pulled a coin from his ear and sparked a lifelong fascination with magic.

Now a 28-year-old professional magician and a psychiatry graduate student at McGill University, Olson has recently conducted experiments using magic tricks to show how people's perceptions and choices can be manipulated.

"Magicians know that they can influence people almost every time," Olson told The Huffington Post. "What I found surprising, though, is that people don't feel this influence."

In a study published last month in the journal Consciousness and Cognition, Olson and colleagues looked to a popular magic trick -- someone is told to "pick a card, any card" and return it to the deck, only to have the magician identify which card they selected -- to see to what degree people's choices could be influenced without their awareness. For the trick to be successful, volunteers have to feel like they're in control of their pick and not realize that the magician is actually subtly manipulating them to select a certain card.

For the experiment, Olson flipped through a deck of cards and asked each volunteer to choose one at random. He used a well-known magician's trick of presenting one card for a fraction of a second longer than the others -- which usually influences the volunteer to choose that card.

"People would come up with these after-the-fact explanations of why they did something, when the real reason was likely just that I influenced them to choose it," Olson said, explaining that a volunteer might say they knew they wanted an ace, or a hearts card. 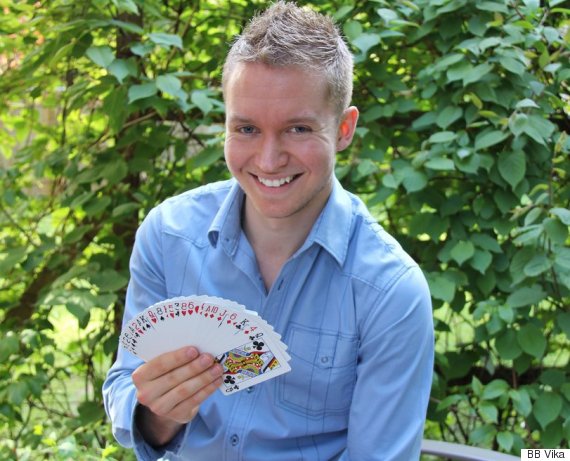 Jay Olson is a professional magician as well as a psychiatry graduate student.

Olson explained that we often feel like we're not being manipulated even when our choices are in fact being influenced by outside forces.

"The main conclusion that we can draw from this research... is that this feeling of a free choice might be more of a feeling that we have and not something that is directly related to the influences on the decision itself," Olson said.

We're likely to fall prey to such influences in many other real-world situations.

For example, you probably think you choose a dish at a restaurant based solely on your personal preference -- but your decision may be also influenced by the menu's layout. Research has shown that you're most likely to choose either the first or the last item on the menu because those are the ones that immediately attract your attention, although you'll likely justify the decision by claiming you picked the meal you were craving most.

"The options that are more available to you, the more attention-grabbing ones... are ones that you choose more often," Olson explained. "Because we eat 1,000 meals a year, these little influences can really add up in shaping somebody's health."

Olson hopes the findings will also be used one day to help people make better health decisions. Putting healthier food choices in more visible and accessible places in your kitchen, for instance, might make it easier for you to pick those foods.

"It's a low-effort way of improving your health by using these findings in psychology," Olson said.

Being aware of these little persuasion tactics can also help you to figure out when you're being duped -- like when a salesman tries to "low-ball" you by offering an unrealistically low price and raising it later.

"In general, it's best to separate yourself from a big decision: Don't decide anything right away, sleep on it and talk to others about it," Olson said. "This weakens the situational factors that can influence decisions."

Check out the video below to learn more about the research.