When I started college I went with the goal of majoring in creative writing. It was something I was always interested in and it factored heavily into my choice of school.

About a semester in, I decided creative writing wasn't all that practical and chose to major in history instead. It made perfect sense, seeing as we all have that rich historian uncle who split his time between three-martini lunches and golf games with clients to retire at 50 atop a fortune amassed from his numerous dissertations on the American Civil War.

Upon graduating, I put my history degree to good use by going to work in the call center of a mutual fund company. My job consisted of getting yelled at for what was going on in the stock market and thinking about lunch.

It seemed like a sensible enough job, as everyone there wore ties.

While the pattern I was running might seem fairly obvious at this point, I had to run into a few more dead ends before I figured out I was spending more time doing what I thought I should be doing rather than trying to go after the things I was truly passionate about. I was lucky enough to be born with a horrible sense for what was practical, so there were no mettlesome distractions such as prestige of financial reward to keep me following a course I would never be happy in.

I decided that letting my aptitudes and interests guide how I chose to invest my time couldn't be any worse than the strategy above and, in following my gut, can happily say I write this from a place where the bugbear of misguided practicality is in my rear-view mirror, bitterly shaking one clenched bug-paw at me as he fades into the distance.

I now have four children of my own, the oldest of which has limited use of his left arm due to a stroke he suffered as an infant. As a parent, you want to visualize a safe, linear arc that leads from childhood to being a happy and productive member of society, but anyone who's raised a child with a disability will tell you there are no straight lines.

With all the uncertainty around his future, my wife and I both made the decision early on that we weren't going to be the ones to try and plot his life around his disability. After spending many years trying to avoid failure, I was more fearful of him shrinking away from life for fear of his limitations than I was of him falling short of his goals.

At around 8-years-old he decided he wanted to play baseball -- the only sport aside from boxing that requires the use of both hands. I'm not a natural athlete. I was cut from little league in the second grade. I threw a football to my son once and his friends laughed at me.

Needless to say, the practical "ditch creative writing for history" me was scared and tried to steer him towards soccer -- seeing as he'd only need to use his feet.

He showed little interest in anything but baseball, so we let him throw everything he had at it.

Every year, he's surprised me. With the help of some great coaches, he figured out how to bat. He can catch and throw with the same arm better than I can with two.

At 13-years-old, he's still playing with aspirations of being on the Red Sox someday. Regardless of what the future has in store, he's learned to stand alone in front of a crowd with his limitations front and center and succeed -- something pursuing a sport that seems more in line with his disability could never have done.

The biggest mistake I made in my youth and the mistake I almost made with my son was that I looked at every pursuit as the leg of a journey that had some definite end goal rather than an opportunity to discover who they are and where they thrive.

Steve Jobs spent a good deal of time drifting in his youth -- dropping out of college after six months to sleep on the floors of friends' dorm rooms and auditing creative classes by day. He credited much of his early work at Apple to this experience.

When addressing the 2005 graduating class at Stanford, he said the following of this period, "You can't connect the dots looking forward you can only connect them looking backwards. So you have to trust that the dots will somehow connect in your future. You have to trust in something: your gut, destiny, life, karma, whatever. Because believing that the dots will connect down the road will give you the confidence to follow your heart, even when it leads you off the well-worn path."

Every parent wants their children to make the right decisions and sometimes, in an effort to protect them, we rob them of the experiences necessary to develop the proper instincts to do so. We over manage our children into pursuits that make sense to us, the end product of which can be adults with little knowledge of themselves and little love for the way they spend the majority of their lives.

We don't know the world our children will enter into as adults any more than our parents did with us, and cultivating the ability to hear their inner voice and the courage to follow it is far more valuable than a pre-written playbook written in conventional wisdom.

What I've found to be the scariest, simplest, and most successful strategy is to give my children the freedom to discover themselves in failure and success while the stakes are still low and trust these dots in their timelines will connect for them in the end. 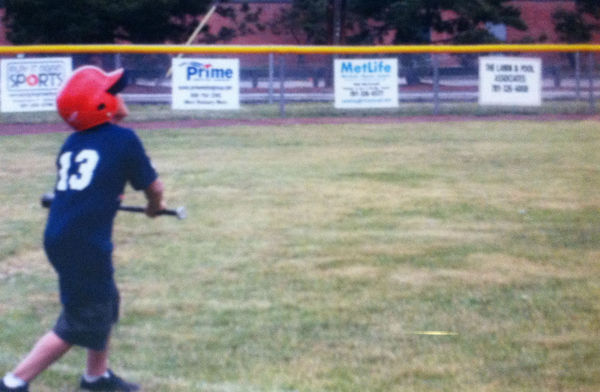