Let me tell you a story... It may or may not end with a punch in the face. 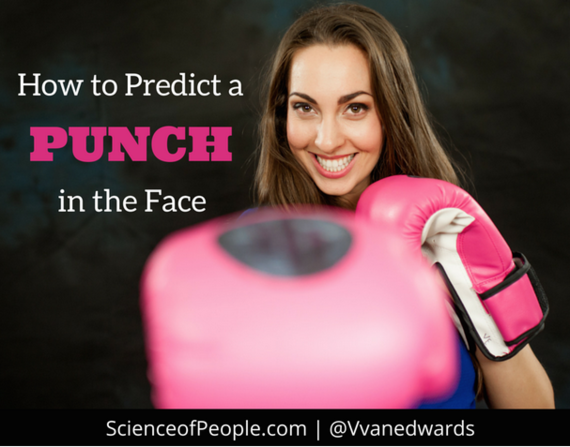 On to the story:

Last Saturday night I was at a pool bar with a few friends. One of my friends (let's call him Dumbo) was shooting pool and really savoring the game -- even though there were a few people waiting their turn for a table.

This big biker guy (let's call him Biker) was really getting annoyed that Dumbo was taking his sweet time. Biker was hovering over the table and started to snort (loudly) every time Dumbo missed a shot.

Then there was a moment -- a moment when Biker's patience ran out. His body language tightened, there was a crackling in the air and I knew it was not going to end well. I walked over to my friend Dumbo and whispered to him, "Dumbo, I'm pretty sure if you don't wrap this game up quickly, you are going to get punched in the face."

He looked at me and laughed, waved me off and said I was "overreacting" and my "body language instinct"' were WAY off.

Dumbo was being pretty obnoxious, so I decided to let it go; a punch in the face might do him some good. Not even two minutes later, Dumbo called to the biker, "Want to get me a drink, dude? I think it'll be a few more minutes." Predictably, Biker put down his beer, walked right up to Dumbo and popped him one in the nose.

Don't worry, only Dumbo's face and ego got a little black and blue. While icing the next day he asked me, "How did you know that guy was going to punch me?"

Whether you're dealing with a drunken bar mate, playing an intense sport or dating a stranger, you have to know how to recognize the nonverbal behavior of "this does not look good."

This post is all about the nonverbal behavior of aggression and what to look out for to protect yourself and your dumb friends.

Let's take a quick tour of the creepy, violent and aggressive behaviors you should watch out for:

Also known as a chin jut or a jaw clench, this is when someone grits their teeth and then shoves their jaw out in your direction. When we are feeling angry we naturally grit our teeth--sometimes to control an emotional outburst and sometimes out of pure frustration. This is also a territorial gesture. When someone chin juts at you they are threatening your space with theirs. It's a nonverbal way of saying, "Back up!" Another reason the jaw thrust is confrontational is because it forces the person to look down their nose at you which is a very standoffish gesture. Look at these three pictures:

The 1st one is neutral.

The 2nd one with the chin jut is the one that should irritate you the most. Don't I look kinda bitchy? You can't help but feel that way when someone sneers down their nose at you.

The 3rd one, looking up at you should be the most seductive. Even though I am not trying to be, anytime a woman looks up at someone through her lashes she looks more engaging and curious.

A nostril flare is when we fan out the outer lobes of our nose so they are as wide as possible. It's sometimes called 'wing dilation'. Flaring our nostrils before a fight is a very important survival mechanism, because when we open up our nostrils we are able to take in more oxygen. This fills up our lungs and loads our blood with oxygen so we have the energy to fight. It is possible our nostrils flare before a fight to take in more of the opponent's smell as some experts think we can subconsciously smell adrenaline and pheromones. Before a fight it is good to know as much about your opponent as possible.

Before getting into a fight our bodies want to get as big as possible. This happens for 2 reasons. First, when we are bigger we look more imposing to our opponent--and could possibly scare them off. Second, the more space our bodies take up, the more testosterone we produce. According to Amy Cuddy at Harvard Business School, testosterone (for both men and women) is the strength hormone. It not only makes us perform better and think faster, but it also makes us feel more confident--essential for winning a fight. So someone who is about to act out with violence will often puff out their chest and hold their head high to look as big as possible.

This is a hard one to catch, but I wanted to point it out. When we are under stress our brain goes into fight, flight or freeze mode where it needs to assess the environment incredibly quickly to decide what to do next. If someone is feeling threatened and is considering getting violent with you, their pupils expand to take in as much of the surroundings as possible--do you have friends with you, could you be carrying a weapon, what's the escape route? This might even be happening totally subconsciously, but you can be aware of this subtle change to predict aggression.

Yet again, pupil dilation also happens during arousal. Specifically when men see a naked woman or when either sex is in orgasm. Why? Our eyes want to take in as much of a good thing as possible. Again if you take off your clothes in front of a man and his pupils dilate, it's a good thing. More body language of attraction here.

Blading is when you turn your body away from the threat so less of your torso is visible to them. In other words, instead of facing someone front on, you pull your leg and shoulder back so the opponent can only see and access the side of the body. Notice in this fight how both men are in the blading position where their dominant legs move back before the fight actually begins: 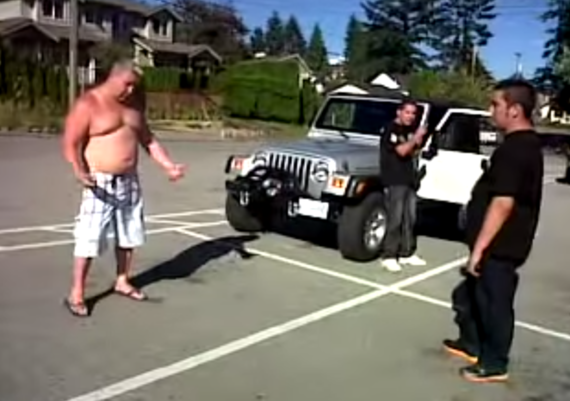 If you see someone step back with their dominant leg and bring their arms up, it's time for you to get the heck out of dodge.

When someone is preparing for a physical altercation the brain wants to protect vital organs. The way the body does this is by creating a muscular armor around soft tissue. Have you ever seen those videos of magicians getting punched in the stomach? They are able to do this by clenching their stomach muscles which protect the sensitive intestines. When someone's entire body tenses up they are protecting their vitals and getting increased blood flow to their limbs in order to fight or flight faster.

The ocular orbital muscles are right around your eyes. When people are suspicious (or at best intensely curious) their ocular orbitals will tighten. You might think of this as a glare or 'narrowing your eyes' at someone. This is the best one to prevent escalation, because when suspicion or dislike is addressed early, it can prevent a fight.

You know how a Rattlesnake shakes its tail at you to warn you not to step any closer? Humans can sometimes do this to test their limits. This video shows a lot of rattling behavior with tons of touching and shoving:

(Video Not Safe for Work or Children)

Before getting violent, perpetrators will sometimes do the following to mess with your space and get you rattled:

Hopefully, you will never be exposed to these yourself or see them aimed at a friend. But knowing the predictors of violence are extremely helpful tools to have in your skills-set for whatever situation you may find yourself in.

Let's end this post on love and happiness since it was so creepy! Check out some of our other fun articles: