Marine Protected Areas (MPAs) -- the national parks of the seas -- are being designated all over the globe. Which is fantastic news. Who doesn't want to give fish species verging on extinction a break? But while MPAs provide ecosystems a chance for regeneration, there's no stopping other bad things from drifting into these aquatic preserves. The worst baddie floating through is carbonic acid, and why only an immediate reduction in carbon emissions will protect the ocean for real.

The ocean absorbs a third of the excess atmospheric carbon dioxide released via our burning of fossil fuels and break neck deforestation. But that favor comes at a steep price...an acidifying ocean.

In 1850 the ocean was around 8.2 pH, at our current rate of CO2 emissions it could drop to 7.8 pH by the end of this century. This overall change may sound like small potatoes, but equates to 100-150 percent more acidity.

For comparison, one of the leading U.S ocean acidification experts, Dr. Richard Feely, senior scientist at the National Oceanic and Atmospheric Administration (NOAA) says if our blood -- which is pH neutral -- became .3 more acidic, our bodies would cease to function.

The implications for the ocean are just as dire.

The more acidic the ocean the less carbonate ions -- what shellfish and coral use to build their calcium carbonate shells and skeletons.

Warm water corals are already being decimated by a combination of ocean acidification and coral bleaching -- caused by warming ocean temperatures. Some estimates say these reefs will be gone by 2050.

Tropical coral species are particularly hard pressed -- adapted to live in the world's warmest waters -- they can only endure the slightest changes in temperature.

Most MPAs are in regions rich with coral reefs -- because though reefs constitute only one percent of ocean habitat they're home to a quarter of all marine species.

Fortunately, under the protection of MPA's over-exploited reefs can recover and regain resilience, but they're not foolproof. Some anthropogenic threats are reduced by MPAs, but the pervasive nature of ocean acidification means there's no best-case scenario: some species can run, but none can hide, and coral reefs are the proverbial sitting duck. 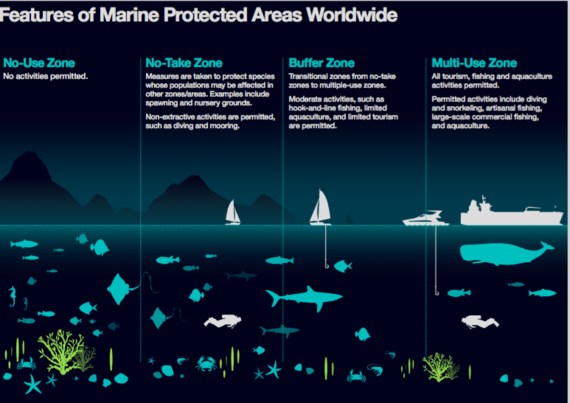 Paul Rose, of National Geographic Pristine Seas, sums it up, "It's like we're conducting a massive experiment," in the huge watery petri dish of the ocean. Throwing everything we can at it -- toxic urban and agricultural run-off, tons of greenhouse gases, oil spills, seismic air-gun blasting, destructive fishing practices -- hoping for the best.

And so far our ocean conservation efforts are not cutting it -- MPAs only cover about 2-3 percent of the ocean. There are efforts being made to transplant corals to regions with water temperatures in their adaptive range. But bottom line according to Dr. Feely is that, "the impact of anthropogenic CO2 far outweighs any adaptive strategy that has been thought about so far."

Ocean acidity is also a highly localized problem. Because though the ocean operates as a single fluid entity connected by massive currents, the carbonic acid isn't evenly distributed. A combination of upwelling water that's high in CO2 already occurs on continental west coasts. At the surface it mixes with water that's absorbed atmospheric CO2, the combined acidic corrosivity of this water is further exacerbated by nutrient rich runoff from densely populated coastal regions.

This west coast phenomenon struck in 2007 with a sudden and severe mortality event in oyster larvae hatcheries in Oregon. The larvae couldn't make their shells because local seawater was too acidic. Some U.S fish hatcheries are adapting by relocating their commercial operations.

Now the U.S salmon industry -- worth $37 billion annually -- is in trouble. Salmon are dying because Columbia River water is too warm. And their food source, pteropods (planktonic snails) are being dissolved by acidic seawater.

The U.S government is calling on the Intergovernmental Panel on Climate Change (IPCC) to up its game on ocean acidification research, and meaningfully tackle the issue at the climate change talks in Paris this December (COP21). And scientists are casting off their professional position as unbiased observers because climate change's deleterious effects on the ocean are happening too fast and too acutely. 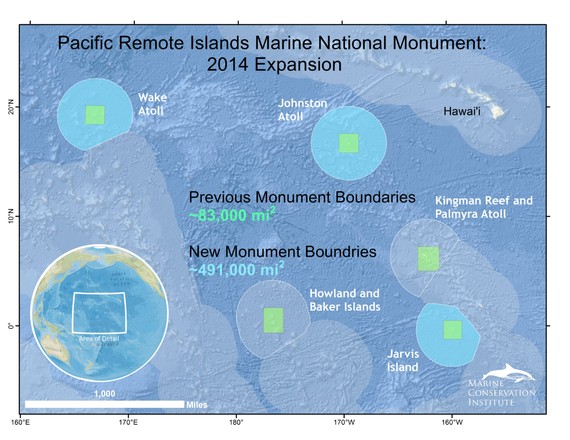 MPA's covering such rich, relatively unspoiled, ocean biodiversity are vitally important. But a static perimeter drawn on a map does NOT equate to a stalwart defense in an ocean that is becoming a gigantic toxic cocktail.

If President Obama gets rid of the Keystone XL pipeline once and for all, kicks Shell Oil out of the Arctic, stops seismic air gun oil exploration on the Atlantic seaboard, and puts a moratorium on fracking -- the masquerade that continuing to burn fossil fuels is okay will end. And he would truly be safeguarding the ocean -- a favor it urgently needs.