Depending on the year you start counting, the lifespan of a Fortune 500 company has gone from 75 years to just 15. In our fast-moving ever-changing world, new technologies and products are disrupting businesses and entire industries at an accelerating rate.

The Internet has been a major disruptive force. When's the last time you went to a travel agent to book your air travel or hotel? Many new companies that use the Internet have managed to disrupt entire industries. Uber came from nowhere to take significant business away from taxicabs, shuttles, and rental cars. Airbnb did the same to with the Hotel Industry. Digital cameras have managed to significantly disrupt the film business - giving people the ability to take and share photos and movies without the laborious process of developing the film.

You need the right tool kit

The businesses that have the tools to sense the changes and adapt before its too late are the ones that are more likely to survive. Those that fall asleep are far less likely to make it. To help businesses to increase their chances of survival, it is important to look at the strategies required.

The marketplace is constantly evolving and changing. To be successful, you need to put in place a system that continuously monitors the marketplace, collects feedback in real time, analyzes the feedback, reports the unvarnished truth to decision makers, and takes corrective action. What worked yesterday, may not work tomorrow, and the information about tomorrow is often available today. Companies need the right telescopes and microscopes to see what is going on and react swiftly once the information is properly analyzed and triangulated.

To create an innovative culture and climate, managers need to make sure that all employees know that innovation is a job requirement. It should be woven into the fabric of the business and given a prominent place in job descriptions, procedures, and performance evaluations. Innovation should be defined to include incremental as well as revolutionary improvements. In a Harvard Business Review interview, Katsuaki Watanabe of Toyota said, "There is no genius in our company. We just do whatever we believe is right, trying every day to improve every little bit and piece. But when 70 years of very small improvements accumulate, they become a revolution." Over a 35-year period, Toyota's innovation culture increased the number of annual suggestions per employee 480-fold from 0.1 to 48. 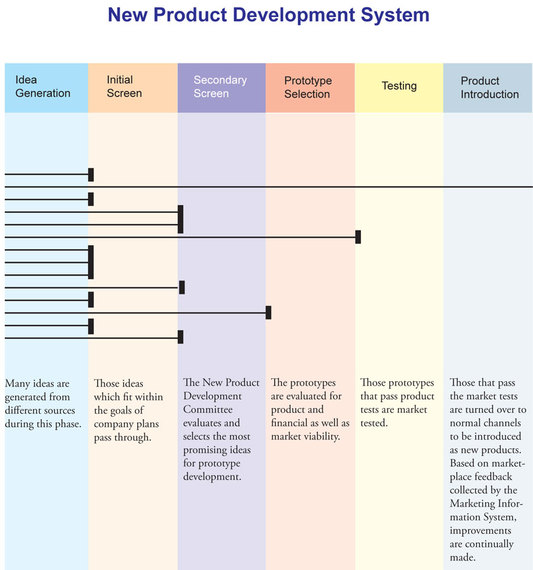 At 3M, employees are paid for spending 15% of their time creating whatever they want. Once employees believe they have a worthy invention, they can "run it up the flagpole" using 3M's "Champion" new product development system. The Post-It-Note was created by a couple of employees that used their 15% time to generate the idea and champion it through the 3M System. Google has adopted a similar system as part of their innovation framework since it pays employees for spending 20% of their time on whatever projects they want.

Innovative companies recognize that failure is an important step in the process of success. They understand that with each failure, the company moves one step closer to success. In this way, failure is given a positive value. For example, if a successful product brings in $1 billion in sales, and it takes 9 failures to achieve each success, each step in the process (including the 9 failures) can be viewed as bringing the company $100 million in additional business - a positive way to look at failure.

Kodak invented the digital camera. It didn't commercialize this invention because it wanted to protect its film business. The Company had what I call the "FDH" syndrome. It was Fat, Dumb, and Happy with its success in film. It looked backward instead of forward. As Bill Gates is fond of saying...

"Success is a lousy teacher. It seduces smart people into thinking they can't lose."

To be innovative, you cannot be afraid to obsolete your own products. If you are, others will obsolete them for you. That is what happened to Kodak and many others.

The Lexus slogan the Passionate Pursuit of Perfection embodies the TQM (total quality management) mantra of continual improvement, or kaizen. This guiding philosophy has propelled Toyota to regaining its lead in global automotive sales in spite of self-destructive missteps and problems caused by the devastating Tsunami of 2011.

While Dell is not recognized as a product innovator, the company was very innovative in its factory processes, supply-chain management, and make-to-order e-commerce systems. Its efficiency strategies worked quite well for a number of years - giving Dell cost and quality advantages over its "IBM-PC compatible" rivals and Fortune 500 status. Dell got FDH, Michael Dell left for a while, and innovation went by the wayside. So did sales.

Necessity is not the only mother of invention

Companies such as 3M and Apple chose innovation at a point in their histories when they did not have much choice. For them, necessity was the mother of invention. 3M institutionalized their innovative ways. Time will tell if Apple will continue to innovate now that Steve Jobs has passed.

We should be most concerned about companies that are currently successful that do not have innovation ingrained in the fabric of their businesses. They are the ones that need to avoid the FDH (fat, dumb, and happy) syndrome, try new things and not rest on their laurels. They have to risk failure to continue to achieve great success. They should know that survival today requires more than treading water, and that many of the companies that were once great are now gone or on their way out largely because they stopped innovating.

The innovations do not have to be revolutionary or the exclusive domain of new or improved products. The improvements can be incremental as they are at Toyota, or they can be in business systems and processes as they were at Dell. Innovations can (and should) be in marketing as they have been at Procter & Gamble. Some may recall that the company invented the "soap opera" to sell its soap.

Wherever innovations come from, however they are done, and in whatever part of the business they occur, companies need to continuously innovate or risk dying and killing the future to save the past. If you do not disrupt your own business once new and better ways of doing things are invented, somebody else will.

Disrupt them before they disrupt you

The best strategy to protect your business from disruption is to beat competitors to the punch - disrupt yourself and them before they disrupt you. If they somehow get there first, use good branding and communications strategies to get into the brains of buyers before your competitors do. IBM and Apple were rarely first to invent new technology, but they were quicker to position and communicate it to the marketplace. Best of luck.