It was the sheerest of sheer coincidences, and I cite it as such only to introduce my present subject. It happened in early May of 2011 as Marianne and Marcus Borg along, with Sarah and myself, were leading our annual pilgrimage In the Footsteps of Paul across western Turkey.

On Saturday the seventh we visited Antioch in Pisidia -- you will recall that Paul was there in Acts 13:14-52 -- and our group had lunch in nearby Yalvaç. Since the local museum was not on our itinerary, Sarah and I gulped some soup and left the group to visit it for ourselves.

In the garden we found what looked like the funeral stele of a laborer whose Greek name was clearly: PHILEMON.

Next day, Sunday the eighth, our group was walking through the northern cemetery of Hierapolis, with its ancient mounds, broken sarcophagi and shattered house-tombs tossed one upon another as if by some irreverent giant (earthquake?). Amid those multiple inscriptions in wall-to-wall Greek, one name suddenly jumped out at us: 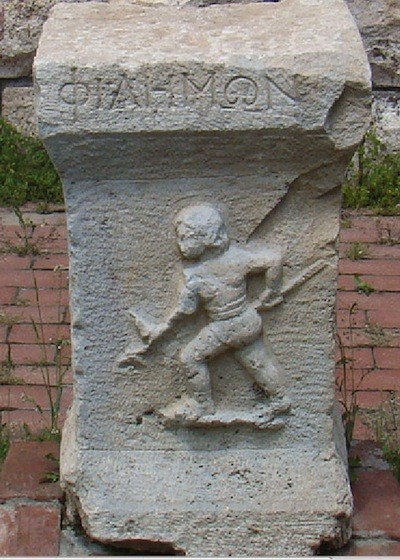 To its right was an etrog, a lemon-like fruit usually associated with the Jewish Feast of Booths and therefore symbolizing a Jewish presence.

How, then, do you read a letter by the Apostle Paul to another Philemon about another Onesimus? Remember, first of all, that Paul's missives are closed letters to specific recipients -- not open epistles like, say, our "Letters to the Editor." In other words, reading them is reading somebody else's mail. If we do not understand them, Paul and his recipients did, and so the problem is mine and yours, not his and theirs.

The only way, therefore, to understand such a not-intended-for-you letter is to imagine its narrative -- that is, to expand over, under, around and through its given content until textual letter has finally morphed into contextual story. What, then, is the story behind Paul's Letter to Philemom with its one chapter of 25 verses?

Paul is in a governor's jail, chained to a soldier in the barracks, probably at Ephesus, capital of Rome's Asia Minor province. (From there, by the way, he also wrote a Letter to the Philippians.) He mentions his imprisonments four times and his advanced age once (1,9,10,13). That is not to whine -- something Paul never learned to do -- but is simply part of the powerful rhetorical persuasion unleashed by Paul on Philemon in this letter. But persuasion to do what? 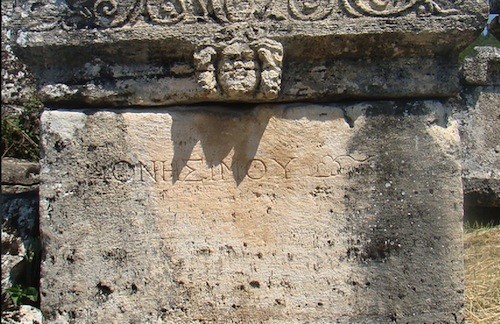 Onesimus was a slave under threat of serious or maybe even fatal punishment from his master Philemon. Following an option allowed by Roman Law, he fled for intercession to Paul as his master's most important friend. But when Paul converted Onesimus to Christianity, a problem arose immediately. Could a Christian master own a Christian slave since "as many of you as were baptized into Christ have clothed yourselves with Christ" so that "there is no longer slave or free ... for all of you are one in Christ Jesus" (Galatians 3:27-28). How could Christians, as Christians, be equal and unequal at the same time?

Paul, therefore, writes this letter and sends it back to Philemon by Onesimus, calling him "my own very heart," and proclaiming him "no longer a slave but more than a slave, a beloved brother -- especially to me but how much more to you, both in the flesh and in the Lord" (16). Imagine Onesimus knocking on Philemon's door to announce that he had good news and bad news for his master: good that he was back, bad that he was free.

But why such a long letter to say, in effect, "Dear Philemon, Free Onesimus. Yours, Paul"? Because Paul is trying -- paradoxically -- to command Philemon to free Onesimus freely since, as he says, "I preferred to do nothing without your consent, in order that your good deed might be voluntary and not something forced" (14). Poor Philemon is on what we might see as a yo-yo of emotional manipulation but which advanced Greco-Roman education would have seen as a small masterpiece of very successful rhetorical persuasion created by a relentless oscillation of Good-Cop and Bad-Cop verses.

As just one example, compare these two verses at either end of the letter. Good-Cop Paul: "Though I am bold enough in Christ to command you to do your duty, yet I would rather appeal to you on the basis of love -- and I, Paul, do this as an old man, and now also as a prisoner of Christ Jesus" (8-9). Bad-Cop Paul: "Confident of your obedience, I am writing to you, knowing that you will do even more than I say" (21).

Did Philemon free Onesimus? Oh yes, because otherwise it would not have been necessary for those later post-, pseudo- and anti-pauline letters -- seen in an earlier blog -- to deradicalize Paul back into a compassionate conservatism acceptable to Roman cultural normalcy. To repeat, once again: Constantine, here we come.