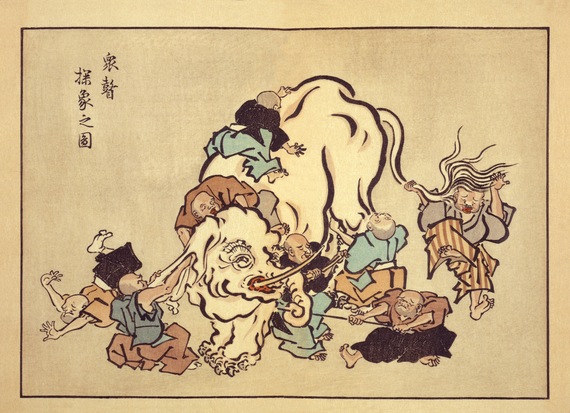 "So oft in (organizational) wars

The disputants, I ween,

Rail on in utter ignorance

Of what each other mean,

And prate about an Elephant

Not one of them has seen!"

An appropriate conflict is not a problem. On the contrary, it is the best way for teammates to collaborate and help the team win.

An appropriate conflict arises when team members differ about the best way to pursue their common goal. This may be because, as the proverbial blind men who went to see the elephant, they are touching different parts of the picture. (See poem at the end of the post.)

One of the most difficult challenges for any team is to make decisions with incomplete and decentralized information about costs and benefits. Each team member has some data about his local environment, and partial knowledge about how each strategy can affect his performance metrics. But no team member has all the relevant data or the full knowledge about how each strategy can affect the team goal.

The salesperson and the accountant are touching different parts of the "elephant." Only when they integrate their information can they maximize the profits of the organization.

Honest, intelligent and well-intended people can disagree about these things, giving rise to an appropriate conflict.

Clean escalation means involving a more senior person in the discussion to help integrate the information, bring a more systemic perspective, and make a judgment call if necessary.

Another term for clean escalation is "systemic collaboration," since both conflicting parties agree that it is best to engage their manager's help to make a system-optimizing decision.

1. Both parties understand one another and come together to the manager with a shared narrative and a shared objective. For example, "Discontinuing Product X entails tradeoffs that are hard for us to evaluate. One of us believes that the savings outweigh the losses; the other has the opposite view. We'd like to explain the two arguments and ask for your help in evaluating what would be the best way to proceed given that we both want to maximize the profits of the organization."

3. The two parties may present alternatives that involve relaxing some constraints outside of their control, but within the control of the manager. For example, they could argue that if Product Y were to be reengineered to include some of the features of product X, discontinuing product X would be a clear win for the company, but that they can't evaluate the costs of this reengineering.

A clean escalation doesn't guarantee the right decision, but it produces a more intelligent process that strengthens relationships and helps everybody feel appreciated as valuable contributors.

In this video you can find out more about how clean escalation helps resolve organizational conflicts as one team.

7.4 How to Resolve Organizational Conflicts as One Team from Fred Kofman

Readers: Have you escalated an issue recently? Have you received an escalation? Do those escalations fulfill the above criteria?

It was six men of Indostan

To learning much inclined,

Who went to see the Elephant

(Though all of them were blind),

That each by observation

The First approached the Elephant,

And happening to fall

Against his broad and sturdy side,

At once began to bawl:

"God bless me! but the Elephant

The Second, feeling of the tusk,

Cried, "Ho! what have we here

So very round and smooth and sharp?

To me 'tis mighty clear

This wonder of an Elephant

The Third approached the animal,

And happening to take

The squirming trunk within his hands,

Thus boldly up and spake:

The Fourth reached out an eager hand,

And felt about the knee.

Is mighty plain," quoth he;

The Fifth, who chanced to touch the ear,

Can tell what this resembles most;

Deny the fact who can

This marvel of an Elephant

The Sixth no sooner had begun

About the beast to grope,

Than, seizing on the swinging tail

That fell within his scope,

And so these men of Indostan

Each in his own opinion

Though each was partly in the right,

And all were in the wrong!

So oft in theologic wars,

The disputants, I ween,

Rail on in utter ignorance

Of what each other mean,

And prate about an Elephant

Not one of them has

Business Careers The Future of Work