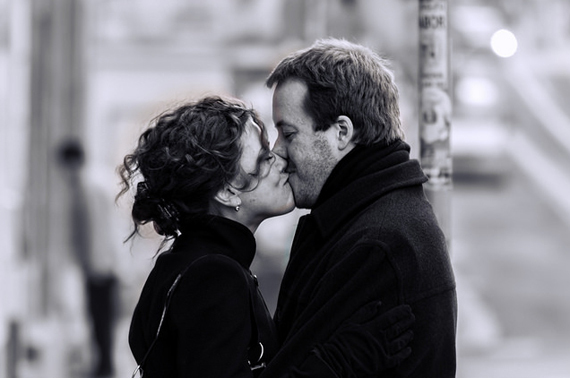 I was fairly certain that Ted, my husband of 56 days, had just called me fat.

Okay, maybe not in so many words. But rather than soothe the insecurity I'd expressed to him about the 10 pounds I'd gained since our wedding, he did the unthinkable. He dared to travel the road most seasoned husbands know better than to even set foot on. His exact words?

"Well, maybe you need to change your diet."

And to make matters worse, he uttered this on Valentine's Day. I kid you not. What I'd hoped would be a sweet day ended up being a very sour one. Yep, our first V-Day as husband and wife is recorded in our marital history book as our worst. By far.

Looking back, though, I see that Ted's proverbial foot in the mouth didn't have to spoil that particular February 14th. A fight didn't need to follow. If I had chosen to react differently to Ted's words, we could have salvaged that day gone wrong.

My reactions aren't just important on Valentine's Day, though. How I respond to Ted's words and actions on any day - whether it's an anniversary, a birthday, or a normal, average weekday morning - makes a difference in the day-to-day of our relationship.

I'd guess it's the same for you in your marriage. And not just for wives like me, but for husbands like Ted, too. Because, let's face it, men aren't the only ones who choose their words poorly at times. We women are equally guilty.

So how could I have rescued that day from going wrong? By using one of my now-favorite marriage tools: The Motive Scale.

Instead of having a knee-jerk reaction, I could have taken a moment to weigh Ted's motives and assume the best.

You see, often the things I'm offended by aren't things Ted intends as offensive. Take his comment about my diet. His subtext wasn't, "Yeah, you sure are fat," even though that's what I heard. The truth was that, as an eager new husband, Ted wanted to see me happy. My extra poundage was making me unhappy. In his mind my complaint translated to "please fix problem." If I'd stopped to consider that my Mr. Fix-It Man might be trying to be helpful, not hurtful, I could have interpreted his words through a more gracious filter and let his good motives outweigh my offense.

You can do the same in your marriage.

The next time your spouse says or does something you might naturally be offended by, hit stop on any knee-jerk reaction. Take a moment to weigh - or carefully consider - what their motives may have been. As you do, make the conscious choice to assume the best, not the worst.

After you've taken the time to do this, be direct with your spouse. Ask what fueled the actions or words. Then be sure to listen carefully and ask questions if something isn't clear.

When you are direct with your spouse, just be careful not to put them on the defensive. You will get a lot further in your conversation if your spouse feels like you're genuinely trying to understand their driving motivation and really trying to assume the best.

Today, Ted is now a member in good standing in the Seasoned Husbands Club. Well, for the most part. He at least knows better than to suggest a change in my diet. That is, not without offering to change his too. And in those moments when he does still choose his words poorly, I'm a whole lot quicker to use The Motive Scale. Thankfully, he does the same for me in my foot-in-the-mouth moments.

This post is adapted from my brand-new free eBook, 5 Simple Marriage Tools You Should Know, which is available through Noisetrade.