The magical ingredient is.... Service.

Service learning is a potentially rich educational experience. It is an opportunity for your students to work on interesting, real-world projects and apply their learning skills in a manner that focuses on helping others. There is an organization called WE School that I am going to use as a clear-cut example of the use of this magical ingredient called service. WE School taps into a student's interest in TV, Music, and Media and uses that interest as an incentive for one year toward working on some service-oriented project. In a nut shell, a student joins WE and begins some form of service. Service can be anything from raising money for charitable organizations to working on a social problem to help those less fortunate. The idea is to choose a service project that makes a difference. The students then, through their service projects, earn the "Golden Ticket". The Golden Ticket gets you into the best one day student conference you could imagine. This would be one of those days that if they sold tickets for it like a rock concert, it would sell out in minutes. Why? Well because it practically is a rock concert. It is a concert of the world's most famous young actors, musicians, and celebrities. People like Malala Yousafzai, Selena Gomez, Sir Richard Branson, Demi Lovato, Common and Jennifer Hudson are a part of the WE Day Celebration. 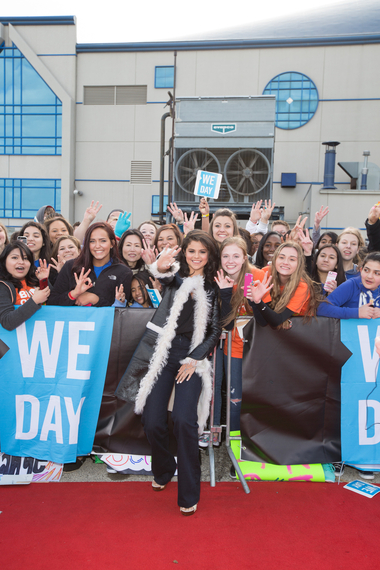 Actress, multi-platinum recording artist and UNICEF Goodwill Ambassador and co-host of We Day Illinois, Selena Gomez walks and poses with fans on the We Day Red Carpet in Illinois on April 30, 2015. Photo Credit: Jeff Schear/Getty Images

These celebrities share one thing in common. They all have their own service project or charitable organization about which they feel very passionate. This creates a perfect recipe: The students are motivated to complete their service project over the course of a year, they have the opportunity to make a difference, and they are rewarded for their work with an opportunity to see positive role models in their life who believe in the power of service to others.

One student I spoke to named Raul explained to me that this was such a strong experience because he felt like he was "helping the next generation and making serious changes in his community". He also explained to me that the experience to hear the celebrities, during the WE day celebration, talk about their charities really made the experience real for him. Craig Kielburger, Co-Founder of We.org, shed some light on this concept of service as an academic curriculum for me. Craig likened it to the quote, "Give a man a fish and you feed him for a day. Teach a man to fish and you feed him for a lifetime." We are teaching our students to fish but we also are asking them to go out and teach others. That, to me, is so profound and I think it is a huge missing link in education.

Youth involved in WE Schools have achieved remarkable results:
• $62 million raised for more than 2,500 local and global organizations
• 19.9 million hours volunteered for local and global causes
• 7.6 million pounds of food collected by youth
• 10.5 million hours of silence logged by youth who took a stand for children in developing communities who are denied their rights (www.we.org)

But let's take a closer look at service as a benefit to students. To complete a service project the following skills must be used/learned/improved: Communication, Collaboration, Team management, Leadership, Problem Solving and the list goes on and on. These skills are also on another very important list-- the list of critical 21st century skills every child is going to need in order to succeed in an uncertain future.

The idea of service being a critical component of a child's upbringing is not new. The Boy Scouts of America's top achievement is becoming an Eagle Scout, which is a huge service oriented experience. Many CEO's of major corporations have stated that they would hire an Eagle Scout over many other applicants because of their innate character.

Eagle Scouts have to persevere to finish. They have a wide range of skill sets. They learn to do hard things. They are disciplined. They aren't afraid of performance. They learn to lead in real world scenarios. They sacrifice their time to serve. They are also more mentally tough. Ken Krogue Contributor Forbes Magazine