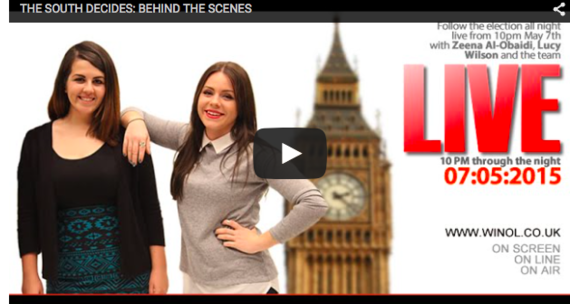 A different way of looking at the British elections...

Although it is still two years away, America is gearing up for its Presidential election.

With Hillary having already raised more than a reported $2 billion, a lot of money is going to be spent on this one.

And a lot of money is going to be spent by the networks covering the election -- particularly election night.

Only a few weeks ago, the UK voted in their national elections, and of course, the returns were covered by all the major broadcasters. They were also covered by students at the University of Winchester, who webcast for 10 hours non-stop.

The Guardian recently did a story on this.

While The BBC does not release its spending on election night coverage, The BBC apparently spends about £7m a day on making their programs. They don't make them cheap.

We do know what the students at the University of Winchester spent on their election night coverage. £100.

Now, clearly there is a major difference.

But that having been said, there is a lot to learn from the students -- particularly in their application of technology to news gathering and television production. And while The BBC (and others) might not embrace the University of Winchester's techniques wholeheartedly, they could certainly cut their own costs quite deeply.

Many years ago, I was approached by someone from Deutsch, a major ad agency in New York about producing a series of videos for one of their clients.

I don't normally produce videos for ad agencies, but this happened more or less by accident.

I went to the meeting, did my pitch and miraculously, got the contract to produce four videos about Zoloft for Pfizer, one of their clients. I probably under bid. I was only asking $350,000 for the four videos. My friends in the ad agency world tell me I was off by 90 perceny. Who knows?

In any event, on the first day of shooting, I showed up with my small hand-held video camera, ready to go to work. The folks from Deutsch also wanted to come to the shoot , and to bring the 'client'. Fine by me.

When they got there, however, they were livid.

"This is not a professional production!" they railed. "You have 24 hours to fix this."

The next morning, the folks from Pfizer and Deutsch were back to see the 'shoot'. I arrived, but so did a big truck. The truck opened up and disgorged a stream of people. Hair people. Make-up people, lighting people, people all dressed in black with clip boards and ear pieces. A director. Some big cameras. And a spread for coffee and Danish.

The people from Deutsch and Pfizer were delighted.

They ate the donuts and went away.

After they were gone, the hair and makeup people, the costume people with their racks of clothes, the directors and the clip board people all got back in the truck and also went away. Then I went to work.

I thought of this as I read the story in the Guardian about the University of Winchester students who covered the elections at a cost of £100 . They (the students) simply used the technology that is available to them (and anyone else) from iPhones for video to live streaming apps. They webcast their coverage, thus making it instantly available to some 3 billion people worldwide at no almost cost.

What the students did was impressive, but hardly extraordinary. Ordinary people do this every day, when they send their friends a video, when they shoot video on their iPhones, when they post photographs on Instagram or Facebook, when they tweet text or video on Twitter.

In other words, the tools to gather and process news and information are already here. You don't need an enormous and expensive "tech" department at a place like The BBC (or anywhere else) to create a way to do this. It already exists -- and people, millions of people by the way, not just a handful of students (though credit to them), are already doing this. (We have actually been doing something similar here for a major cable company for years, on a daily basis).

As is often the case, the technology and the applications for new technology are vastly outpacing the ability of conventional companies to keep up. And clearly, it works.

You would think that a company like The BBC would take a look at what has been done and implement it at The BBC immediately.

You would think so, but they won't.

And it is not because they are recalcitrant. It is simply hard, if not impossible, to turn a giant ship around quickly, if at all. Long held beliefs are hard to shake.