Though we're not even halfway through January, for many of us new years resolutions are quickly becoming a distant memory. According to data from StatisticBrain.com, 29 percent of resolutions don't make it past the first 2 weeks. In order to help those still hanging in there with one of the most common resolutions -- spending less, and saving more -- we take a look at some of the things burning the biggest holes in American pockets and how to deal with them.

A recent study by ValuePenguin.com found that Americans collectively stand to save $200 million their airfare expenditures by utilizing reward credit cards. By examining data from the Bureau of Labor Statistics, the research found that approximately 10 percent of all U.S. households reported airfare spending throughout the year, and a whopping 90 percent had gasoline expenses. While the price of oil has dropped in recent years, airfare prices are still burdened by heavy taxes and fees -- making them as expensive as ever.

One of the easiest ways to save on airfare is to take advantage of loyalty miles/points and reward credit cards. You don't have to be a travel hacker to qualify for savings on airfare and hotel stays. Most credit cards can get you 1 percent back on your expenditures, in the very minimum. In the long-haul this can add up to significant savings.

All you have to do is remember to actually use the reward points you earn. A few years ago, a joint study between Colloquy and Swift Exchange showed that $16 billion worth of loyalty program rewards go unredeemed each year. With how much banks have been upping bonuses and rewards since that study was published, that number is sure to be much higher in 2016.

Housing expenses make up the largest portion of the average household budget -- a little over $10,000 is spent annually. Finding ways to reduce these costs can be tricky, and advice will usually vary depending on weather you own or rent your dwelling. 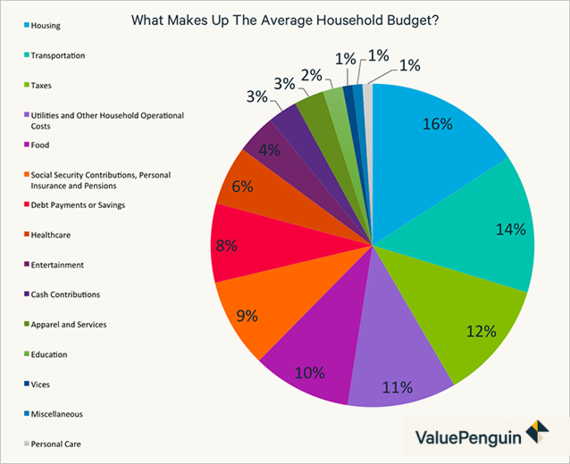 The biggest way you can save, in both cases, is by taking on a roommate. While inconvenient, it is the fastest way to reduce your total costs down by as much as 50 percent. If you have a spare bedroom that isn't being used, taking on a houseguest should be an option to consider.

Estimates state that nearly two-thirds of Americans have a mortgage -- which can be bad news given the fact that the Fed has recently upped interest rates. In order to prepare themselves for increasing housing costs in 2016, homeowners should take a moment to familiarize themselves with their loan. If you have a variable interest rate, it may be a good time to lock into a fixed rate. However, you need to offset that with the new closing costs. Consider contacting a financial planner or consultant to determine the best cost-saving option for you.

Save on Entertainment and More Along The Way

While the average U.S. household spends just 5.4 percent of their annual budget on entertainment, it's a category worth mentioning due to the sheer reach it can have. If you plan accordingly, and pick up the right hobby, you can save yourself a lot of money on being entertained, while at the same time save a ton of money.

One of the best hobbies you can pick up for your wallet is cooking. Eating out, especially if you live in a big city, can be a massive drain on your wallet. While you eat that plate of fancy Italian pasta, it's taking bigger bites out of your finances. While you may not end up as the next-iron chef, challenging yourself with new recipes can be a good way to get through a boring day.

Exercise can be another way to entertain yourself, fulfill another resolution, and it doesn't require a gym membership. You're one quick Google search away from finding thousands of free exercises you can do from home, with no equipment requirements. Plus, if you combine this with the above cooking suggestion -- your new healthier lifestyle can help partially reduce down another major expense, healthcare.