The Healing Fields from Alexandra Garcia on Vimeo.

Newspapers are in trouble.

Once the engines of enormous wealth while providing their readers with important information, they are on the ropes. Some have already gone out of business, others will follow. They are the victims of the success of the digital revolution and the Internet. Their old business model no longer works.

Grappling for survival, they grasp at modifications of their old, and until recently, very successful model -- having people pay for subscriptions or selling ads. Neither works particularly well. Pay walls or no pay walls? Even with them, they don't generate the kind of revenue they used to. As for advertising, online ads just don't generate that kind of revenue either, and with the advent of ad blockers, it would seem it is going to provide even less. Desperation is in the air. Editorial staffs are reduced, publications truncated - some even give up on print entirely.

The Los Angeles Times recently turned its front page into one great ad:

There is, however, another solution. But it requires a complete re-thinking of what a "newspaper" is.

The video above was produced (reported, shot, edited, voiced) by Alexandra Garcia, then a Video journalist with the Washington Post, now with The New York Times.

Take a look at it.

It is great reporting. It is great journalism. It was done not at great expense with a reporter doing a stand-up, with a crew, with a cameraman, with a producer, with an editor -- it was done by one journalist working in video the way she might work in print. On her own.

It is as good, or better in fact, than most of the reports you see on television network news. Much better. And done at a far lower cost.

This is great journalism married to a new technology. And produced by a newspaper.

The New York Times is not the only newspaper to create video. Most today do. Some of it outstanding. Take a look at The Newark Star Ledger for an example of great video journalism.

But the problem with the papers is that having made this excellent video, they tend to bury it on their websites or just keep it to themselves.

This is a mistake. Because in an online world print may have diminishing value, but video (television) journalism does not. TV is one of the few places in the media world where people are still will to pay a lot for content. A lot.

And newspapers are, by definition, content generating machines. They are just generating it in the wrong format. But in a digital world (the thing that is killing the papers) there is not a whole lot of difference between print and video actually -- just like on your phone. Type a text; make a video.

People may not be willing to pay much for print anymore, but as it turns out, the market for video is enormous, and growing all the time.

We once lived in a world of very few television stations. A handful that became a few dozen. In 1992, Bruce Springsteen sang -- 57 channels and nothing on. Today, it is more like 2,000 channels and still nothing on: 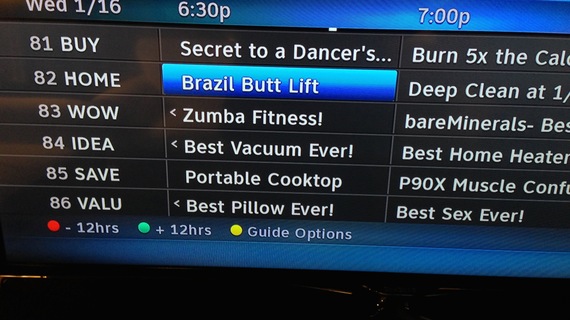 And this is just in the U.S. Worldwide, the same cable/digital/satellite revolution that brings 2,000 channels into your house does the same in every country in the world. Britain, which once had only The BBC now has 600 channels that run 24 hours a day, seven days a week. And that is just Britain. The rest of the world is no different. 50,000 channels worldwide? A massive, enormous, endlessly hungry demand for high quality content.

And here are the newspapers, sitting on it.

Do you see a market here? Do you see a connection? Do you see a way in which papers like The LA Times and The NY Times and a hundred others could aggregate, package and license their outstanding video content around the world?

But to do this, the papers have to change.

In a digital world, do you know or care what 'channel' you watch your favorite show on? If you saw MadMen, did you watch it on AMC or on Netflix and do you care? If you liked The Killing, did you see it on DR, the Danish National Network? I doubt it. We are increasingly becoming platform agnostic.

The real value is in the content, not where you saw it. And the newspapers could become the content making machines of journalism for the world -- if only they would embrace what they already are -- content creators, not advertising carriers and sellers.