There is a feisty old woman in every village. In Maparanhanga, a remote village in Mozambique, reached by a several-hour-trip through potholes held together by scraps of road, the feisty old woman didn't stand out at first. She sat alongside her female neighbors in a circle divided by age and gender -- men standing on one side, women sitting in another group, children closing the circle -- watching with some horror as a young man, unknown to her before today, asked her to eat some nice meat and rice.

It was considered high-class food in this rural area where meat stew is a luxury and two months of the year around harvesting are known as "the hunger period." And still she said, no way, her face showing nothing but disgust. Why not? Because the nice meat and rice had been placed next to some human feces, carefully arranged on a piece of paper, and she had watched, along with the rest of the village, as flies happily flew from shit to food and back again.

This cannot have been a new event: as is the case in 80 percent of villages in Mozambique, and countless others worldwide, the only latrine available to villagers was bushland. Left in the open, the shit would surely have come back into the village on flip-flops and feet and fingers; on chicken claws and dog paws. That was how it had always been. Nothing wrong with it. But seeing the shit and food together was a revelation. There were gasps, screams, embarrassed laughter. The children covered their mouths; the old woman looked outraged. She was seeing her living environment with fresh eyes, and with those fresh eyes had come disgust.

And with disgust comes change -- or so goes the theory of Community-Led Total Sanitation (CLTS). CLTS, a methodology aimed at improving the parlous state of global sanitation, was developed ten years ago by the Indian agricultural scientist Kamal Kar. Community-Led, because it's not supposed to be about instruction but revelation. Total Sanitation, because that's the goal: there's little point in 90 percent of villagers having a latrine when the other ten percent are still tramping shit back into the living environment.

The need for this theory, and the change that comes with it, are more significant than one would assume. The idea of defecating in the open air to a toilet may seem unthinkable (though it's the reality of four in ten people on the planet, or 2.6 billion), but it is a curious fact that even if someone has a latrine, they may not choose to use it despite the obvious and less obvious risks. Human excrement can carry up to fifty communicable diseases. Diarrhea, 90 percent of which is caused by food and water contaminated by excrement, kills a child every fifteen seconds. That's more than AIDS, malaria, or measles, combined. Human feces are an impressive weapon of mass destruction.

Decades of efforts, global and local, have aimed at eradicating the practice of open defecation. In the late 1970s, the revered Mozambican independence leader Samora Machel decreed that every family had to build a latrine, and, says Manuel Freitas, head of UNICEF's water and sanitation section, every family did. "I was working in the provinces at the time and it was my job to see that the latrines were built. And they were. But when the rains came they all collapsed." After the rains, Mozambique's twenty-year civil war destroyed huge quantities of infrastructure. Villagers fled to the cities, where the war was waged less, and moved into slums with no sanitation. The Samora Machel-inspired latrines were no more. 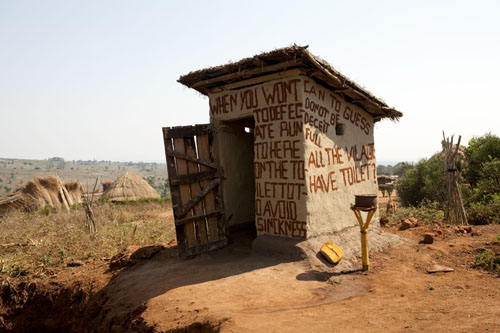 One of the first latrines in Venceremos ("We will overcome") village in Mozambique, built by the village leader as an example to follow. Venceremos is now Open-Defecation-Free (ODF). (Benoit Marquet)

In villages across the developing world, governments have provided reasonable enough latrines that have again and again been turned into storage spaces or simply abandoned. In India alone, millions of government-funded latrines have become goat-sheds. Some had been built near kitchens, a taboo in Indian households. Some people preferred the bush to a smelly, stuffy box with a dark hole in it. Children were scared of falling down the pit. And then there was human perversity: The World Bank's Water and Sanitation Program, in its annual cartoon calendar, provided an image of a rich farmer in India, at home with his well-dressed family, expensive television and hi-fi, a fine Maruti car parked outside. In the next frame, the well-dressed family was getting out of the Maruti and trooping off to the open defecation grounds.

Open defecation is what many Mozambicans do. The songs schoolchildren sang to me when I visited were about cholera, because cholera comes as regular as the rains. The children described the symptoms clearly and with authority: You defecate a lot. You vomit. And then you might die. Diarrhea kills 16 percent of Mozambican toddlers every year, more than AIDS. Only pneumonia and malaria kill more. Villagers know this. After years of being bombarded with health messages, they know about contamination and hand washing and flies. And still they were shitting in the bush.

But in Maparanhanga, over 100 people followed Americo Muianga, a UNICEF CLTS specialist, down the earth paths to some bush-land. The villagers laughed as Muianga stood there, asking someone to show him some fresh shit. They didn't seem ashamed. That was before the flies, merrily landing on the rice and meat. 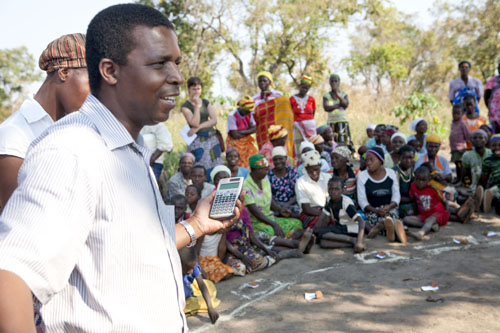 UNICEF's Americo Muianga helps the villagers of Maparanhanga calculate how much excrement their practice of open defecation is leaving around the village, in daily, monthly and yearly amounts. (Benoit Marquet)

"Are those different flies?" Muianga asked the crowd. "No," said one man. "They are the same." He looked appalled. This is known as the "triggering moment" in CLTS. It is when villagers realize -- but aren't instructed -- that if they defecate in the open, they must be eating their own and their neighbor's shit, because it's on their feet and hands; on the claws of their chickens and the paws of their dogs. It's elsewhere too, as Muianga demonstrated with a bottle of water. He opened it and offered it around. Then he dipped a stick into the excrement, stirred it into the water and offered it around again. People recoiled. They looked nauseous and horrified. And the penny had dropped. "The basic assumption," says the CLTS handbook, "is that no human being can stay unmoved once they have learned that they are ingesting other people's shit."

"When are you going to build latrines?" Muianga asks. "Tomorrow," the men reply. They look determined. A few draw latrine designs on paper: a two-metre pit, some planks in a criss-cross to form the hole. You can come back in a month, they say. You will see how we have changed. There will be no more shitting in the bush. It's easy to be sceptical. The whole meeting had taken only two hours. Two hours to change the stubbornness of forever? Except that CLTS is the biggest success story in sanitation for decades. 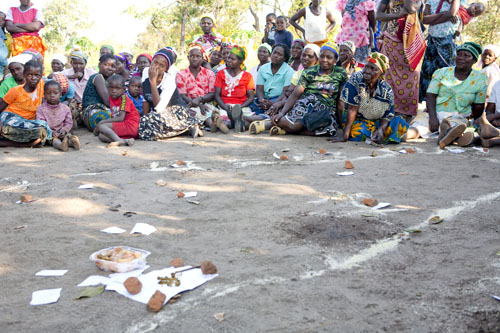 In Mozambique, villagers attend a "triggering" aimed at getting them to build latrines. Food and shit, and the flies that land on both, make for a powerful message about contamination. (Benoit Marquet)

CLTS turned some development tools on their heads. It is not about hardware, but software. The beauty of it is its manipulation of human emotions, not plumbing. Disgust, then pride. In triggered villages in Mozambique, the village leaders showed me their new latrines, beaming, along with signboards declaring their village ODF. Most CLTS programs provide no subsidy, relying on people to help themselves. In India, it's common for villagers to turn themselves into "toilet spies," reporting on people who continue to openly defecate, because they are shaming the village. The toilet spy gets half of the village fine the transgressor must pay.

In Mozambique, CLTS is instead combined with an awards system. There's no social punishment, because in Mozambique the village leader rules. In villages that remain ODF (Open Defecation Free), the village leader is awarded a bicycle. "In our culture," one district administrator told me, "the leader is a mirror." So far it's working. In 2007, when Mozambique first tried out CLTS, 105 villages applied to the award scheme. Thirty five were judged to be properly ODF. Two were disqualified when an inspector peered into a latrine pit and found it empty. "The village leader was furious!" says Freitas of UNICEF. "He said, you lost us our prize!" in another, a toddler was seen defecating in the open, and the village was disqualified.

It may seem harsh, says Freitas, but something's working. This year already there are over 400 applications for the ODF awards. "I didn't believe in CLTS in the beginning," says Freitas. "I was totally against it. I thought, you can't just go into a village and start insulting people! But there I was, counting how many latrines had been built. In 2007, it was 2000. In 2008, 30,000. And now, look, this year we are expecting 270,000 people to be ODF. It's amazing." Nor is it just in Mozambique. CLTS is now being used in over 20 countries.

Peter Hawkins, the country representative for the World Bank's Water and Sanitation Programme, wasn't convinced either. He's still not sure about the awards scheme and notes a few problems with the new latrines: villagers were leaving toilet paper in an open container because they were scared the pit would fill up, and some of the lids weren't tight enough to keep out flies. "But moving from open defecation to latrines is a huge step," Hawkins tells me now. "And not having shit all over the place has to be a good thing."

I ask the village leader of Venceremos ("We will overcome") village how the place has improved. "It smells better," he says. "And the cholera has gone." On his latrine, he has painted slogans in English. Why English, when his everyday languages are Ndau (a local dialect) and Portuguese? Because he aspires to speak English, he says. And the slogans make their point better. "When you want to defecate, run to here on the toilet to avoid sickness. Do not be deceitful. All the village have toilet." And it only took a month to persuade them. 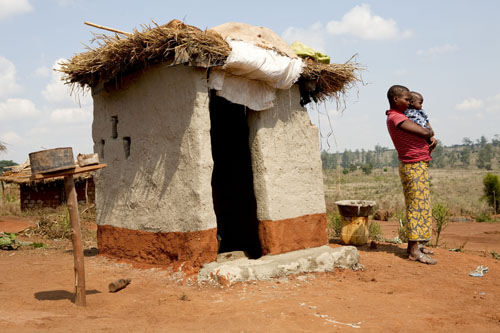 A mother and child outside their new latrine. In Venceremos village, a powerful sanitation campaign has seen 100% of families build latrines in a matter of months. (Benoit Marquet)

I ask Freitas and Hawkins how convinced they are by CLTS? Hawkins says 95 percent. Freitas, the man who thought it would never work, has no doubt. 120 percent, he says. Definitely. "I have no doubt. In thirty years in this sector, I've never seen anything like this. It's a social explosion."

Author, 'The Big Necessity: The Unmentionable World of Human Waste and Why It Matters'