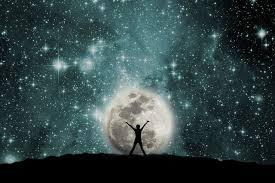 This is a fact, though physically, I can't feel its truth in my body. I stand at my window, watching the pit bull next door lope around the yard, or across a few weeks, the hostas push their twirled leaves through the ground and unfurl, or the man who staggers up and down the block in his ragged trench coat, dragging his wire cart behind him that is packed with cases of cheap beer. Everyone else is moving but me. The universe doesn't hurl me through the glass and back out into the world with bloodied hands and knees, so I mistake my apparent stillness for hopeless inertia.

It didn't always feel like this. When I was a kid, I ran at the world. When I was five, I put on my mother's silver cuff bracelets which, I believed, imbued me with Wonder Woman's vaulting powers, and stood on the top of a flight of stairs and jumped. Of course, I broke my arm, but for a few brief seconds (one?), I was caught in an exhilarating tumble through the air. At nine, I secreted myself in the basement in front of a robin's egg blue Smith Corona, and typed out, with great assurance, the opening chapters to a torrid, Victorian romance novel. What did I know about a heaving bosom and a throbbing manhood? Nothing, except for when the neighbor boy and I showed each other all that we had in his backyard shed. But I could dare to imagine what I didn't know.

As an adolescent, the snake of bipolar depression slithered in, and I drank to feel better, and cut myself to feel worse -- an intertwined attempt at desperate self-medication. Drinking could, in the moment, transform me into a funnier, more expansive, brash self. I risked more (though might feel shame and regret later). Cutting was a way to render unseen pain visible and specific (I smiled for the world while imagining jumping from a bridge). My arms, concealed under long sleeves, throbbed in acute response to the injuries I suffered on myself.

For many years, I was pinned beneath the immovable rubble of illness (bipolar, anorexia, alcoholism) and failure (loss of a job, end of a marriage), staring out the window as what could be my life rushed by at 12,000 miles a minute. Now? I am in what is called "recovery" -- no more drinking and cutting, only necessary eating and stability. We usually think of the word "recover" as meaning a regaining of health or a return to some prior, longed for condition. But its Anglo-French roots are more instructive: "to regain consciousness." A coming back to the essential self, the self before the shit, the self that can take imaginative, daring leaps into the cosmos.

Over a year ago, I got divorced from the man whom I believed, at least twenty years prior, was my soulmate, a heady designation, more suggestive of a naïve trust in those bodice ripper romances. When I found out about his many years affair during our marriage? Momentarily decimated. For weeks, I was nauseated and sleepless, imagining them together, imagining myself never moving again out of bed, out of grief and anger, out of my life inscribed with pain and back into the world of movement and flight and joy.

But I decided that rather than stay put, I was going to say "yes" to whatever the universe offered me as long as the offering wouldn't kill me. Reconnecting with the friends I lost track of along the way out of shame in my years of illness? Yes. Try dating while sober? Yes. Try a heady fling that left its metallic taste of adrenaline in the mouth -- like swallowing blood, sharp and clear? Yes. Try affection, transparency, and vulnerability with the people, new and established, in my life? Yes. Try to say "yes" with integrity and authenticity.

In one of the photo albums at my parents' house, there is a picture of me when I'm six in the hours before my birthday party. The backyard table is strewn with streamers and party favors. On each paper plate, a tasseled, pointed hat and one of those noisemakers that uncurl and curl back like a long, happy tongue. For some reason, I am not in a party dress, but in a blue flowered bikini. On my feet? No MaryJanes, but roller skates. My arms are opened wide and one foot is lifted from the ground. Me, the photo seems to say, this is me moving into my boundless life. It is the "yes" I say now.