Comet ISON (C/2012 S1), the much-anticipated visitor from the distant depths of the solar system, continues to brighten and this week should reach naked-eye visibility as seen from a dark sky, away from city lights. The comet was discovered more than a year ago and has sparked big interest from those who think it may be terrifically bright and also from some who believe it will be nothing special. The burst of excitement came from the realization that ISON will swoop quite close to the Sun on November 28, some 1.8 million kilometers from our star's surface, which will enable it to light up brilliantly around Thanksgiving Day. 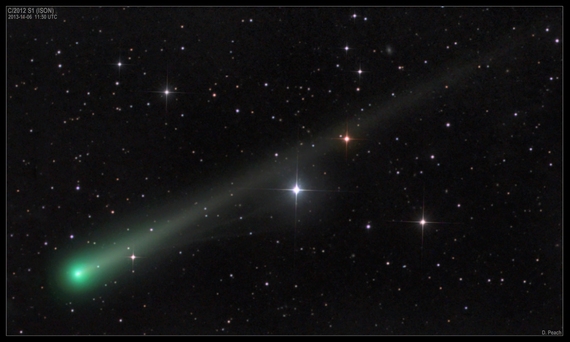 Comet ISON is now gently gliding across the constellation Virgo, which makes it a morning sky object. To see Virgo, you need to gaze eastward starting around 4 A.M. local time. This week the comet will rise about three hours before the Sun, making it visible to the eye, to binoculars, or in telescopes for an hour or so while the sky is still relatively dark.

By week's end, on November 17, the comet will be easy to find because it will glide past Spica, the brightest star in Virgo. 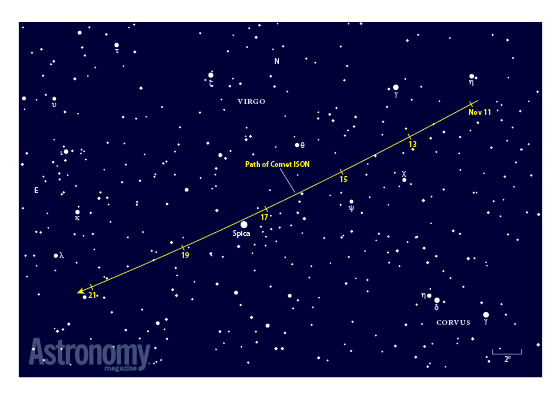 The Moon is also a factor. The Moon acts like a giant searchlight in the sky, making spotting fainter objects more challenging, in effect dimming down their light. The Moon begins the week a day past First Quarter, in the evening sky, but ends the week at Full Moon, when it will interfere with observing all night long. So observing the comet in the early and middle part of this week will be easier than at week's end.

Comet ISON now glows at about 7th magnitude, just a tad fainter than can be detected by the eye alone. But it is brightening rapidly and will become a naked-eye object most likely this week. The comet shows a coma, the cloud of gas and dust surrounding its nucleus, some 6 arcminutes across -- that's about 1/5th the diameter of the Moon -- and a tail stretching across a portion of sky roughly equal to the width of the Moon on the sky.

In binoculars or a telescope, the comet will appear as a soft glow, a fuzzball shimmering from the gases released from the comet's frozen nucleus, which measures a few kilometers across, as it increasingly warms in sunlight.

Meanwhile, another comet also inhabits the morning sky, Comet Lovejoy (C/2013 R1), which is putting on an impressive show in the northern part of the constellation Leo. Lovejoy is visible during the same predawn hours as ISON, and last week Lovejoy was actually a bit brighter than ISON. You can find Lovejoy moving to the northeast along the top of Leo's so-called Sickle, the backwards question mark asterism of this bright star group.

Keep your eye on ISON and realize that, even if it's subtle, you're witnessing one of nature's most amazing visitations, a rare and distant traveler wafting into the inner solar system, a stranger from the sea of darkness beyond us.