The big week is finally here! Not necessarily the best week to view the comet -- that may be coming next week. But this is the week astronomers have been talking about for months as it is on Thursday that Comet ISON (C/2012 S1) will pass closest to the Sun, a mere 1.8 million kilometers away from our star's photosphere, its glowing "surface."

This gorgeous photo shows the appearance of the comet on November 15: 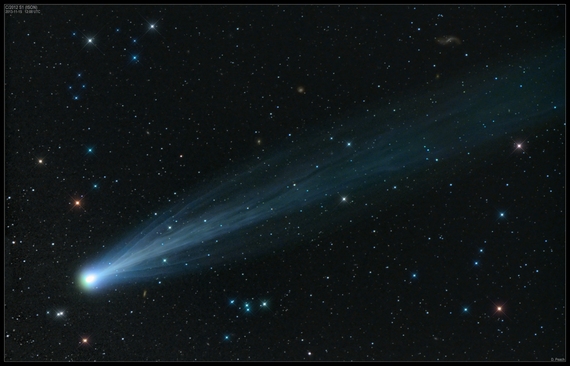 As astronomers who have been watching the comet know, however, the past few days -- and the next few days -- will not be the best ones to try to catch the comet.

On Monday, November 25, the comet rises just 54 minutes before the Sun, making it visible only marginally in deep morning twilight, You may see the comet with a pair of binoculars, given the bright twilight and some interference with a Last Quarter Moon, but you'll need a perfect horizon to the southeast. The comet lies below the bright star Spica, the brightest star in Virgo, and below the bright planets Saturn and Mercury.

This map will show you exactly where to look: 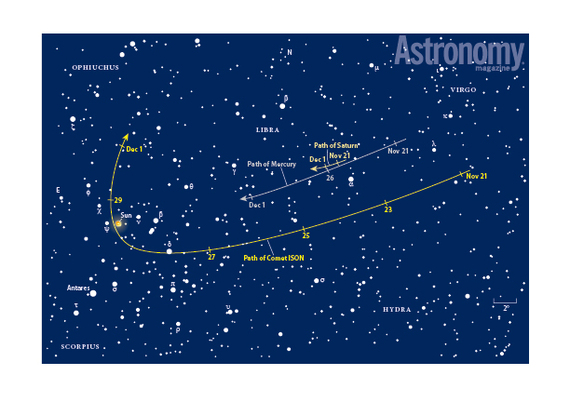 The comet will only be harder to see over the coming mornings as it inches closer to the Sun. Astronomers now believe ISON is brighter than 4th magnitude and rapidly brightening, making it easily visible to the naked eye when it's under a dark sky. But of course on Thanksgiving Day it will reach perihelion -- closest to the Sun -- and be in a daytime sky.

Some observers hope the comet will brighten so dramatically that it will be visible when it's close to the Sun during the day on Thanksgiving. The Minor Planet Center at the Harvard-Smithsonian Center for Astrophysics, the official record-keeping agency of professional astronomy, predicts the comet will peak on Thursday at around magnitude -6.7, making it much brighter than Venus.

This would make the comet visible in a daytime sky, potentially, at least. But when the comet is at its brightest, it will be only a solar diameter or so away from the Sun's disk. Some astronomers will try to observe the comet during the day by blocking the Sun's disk and carefully looking nearby to pick up the comet. But such an observation will be tricky, and is extremely dangerous. If you try to observe Comet ISON on or around Thanksgiving, when it's near the Sun, DO NOT LOOK DIRECTLY AT THE SUN! This could blind you and make the observation the last one you will ever make.

It's much better to wait until ISON reemerges, on the other side of the Sun, two or three days later. Through the weekend, the comet will be back in the morning sky, slowly moving farther from the Sun in our sky, and there won't be a bright Moon to interfere with seeing the comet as there was the last couple of weeks.

On Saturday, November 30, ISON will rise about 30 minutes before the Sun and be visible in significant twilight. Just how impressive it will look is still not clear -- will the comet hold together? Will it brighten dramatically because its fresh ices are exposed to sunlight, creating an outburst of light? Will dust stream off the tail more significantly as it warms, creating a spectacular double tail?

We just don't know yet, but the world will be watching and we'll find out soon.

You can find more extensive maps and guidance on observing the comet on www.astronomy.com, Astronomy magazine's website.