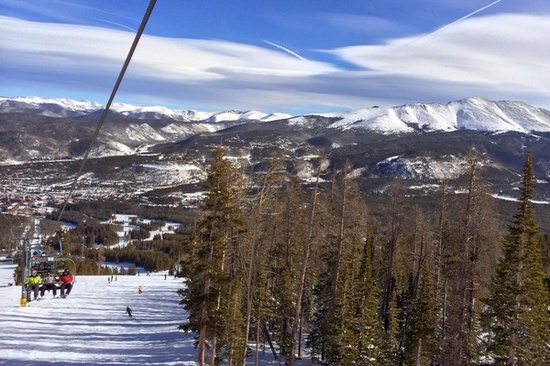 Up the mountain. All photos by Juliana Jaoudi.

By Juliana Jaoudi for Fathom | A lifelong California ski loyalist was seduced by Colorado's consistently powdery December snow and ski-in/ski-out resorts. Juliana cheats on Lake Tahoe with Breckenridge and spills the juicy details.

BRECKENRIDGE, Colorado – I'm a recovering California skier. I was raised skiing the Sierra Nevada mountain range at Mammoth and Tahoe. Since Mammoth offers a huge mountain and a low-key SoCal vibe and Tahoe delivers gorgeous lake views and a slightly more chic and fun après-ski scene, I never bothered exploring other ski resorts until I got older and smarter.

With time and education comes curiosity. I made it to Utah in college when my childhood best friend attending Brigham Young University insisted I join her and the non-drinking crowd (a welcome respite from flowing undergrad kegs everywhere else) to ski Alta, Park City, and Sundance. Hello, powder! Hello, aspen trees! Hello, so different and so fun! I stuck with the Mammoth-Tahoe-Park City circuit until December 2013. 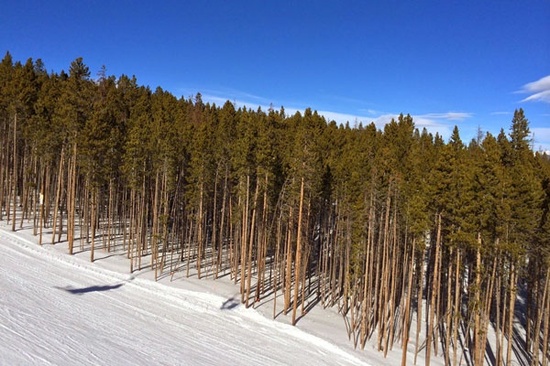 A glorious morning on the slopes.

My ski-nertia was real: It took me Utah plus two decades to get to Colorado. I skied Breckenridge and Vail for the first time a few weeks ago. While loyalty is generally a good thing, I've clearly been missing out. But let me explain (defend myself). I've avoided Colorado for one simple reason: It's colder on the mountain. Colorado's elevation means loads of snow (good) but it also means colder temperatures (brrr, bad). Let's compare: Breckenridge at its peak reaches 13,000 feet above sea level. Mammoth peaks at 11,000, and Park City a mere 10,000. Those 3,000 extra feet may mean more cold, but they also mean more SNOW.

I chose Colorado because I wanted good snow in December, and there aren't that many places you can be sure to get it. In California, December snow is inconsistent: In 2012, the Sierra Nevadas had more snow than any other mountain range in the world. In 2013: nada. It was all man-made. Over New Year's week in Colorado, we got 30+ inches — on top of a huge base. (That base means the season lasts longer, well into the spring.)

You get the point: Colorado is built for skiing. Its many mountain towns are easily accessible in less than two hours by car or on connecting flights from Denver International Airport, a huge, convenient hub with direct flights throughout the United States. Vail, Keystone, Copper Mountain, Aspen/SnowMass, Breckenridge are the big resorts. When you're planning a trip only a month ahead, the options narrow. Aspen and Vail are not only exorbitantly expensive; they're also booked way in advance. 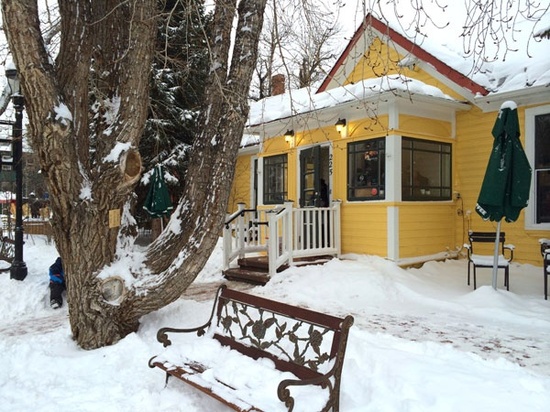 Even Starbucks is cute on Main Street.

Breckenridge it was then, for lots of good reasons. It's an easy 90-minute drive from Denver. The mountain is big and varied, and skiing in and out is a given because of the many resorts and condos that are adjacent to the slopes. (Many more than I've seen at other resorts.) The vibe is laid back, but you'll find all the conveniences and amenities you want in a ski town. Breckenridge is an authentic and not overdone mining town with excellent restaurants and a proper Main Street with loads of cute local shops. (We watched business grow exponentially overnight at the Cannibis outlet when the new smoke-as-you-please law was enacted on January 1, 2014.)

The mountain is really fun, great for snowboarders and skiers alike. The bases are called Peaks 6, 7, 8, 9, and 10. There are numerous trails on each peak, for a total of 187. Peak 7, Peak 8, and Peak 9 are the most popular; Peak 6 is the newest. 34 lifts get skiers up the mountains efficiently. (Here's a map.) Generally speaking, Breckenridge is not as steep as Vail, but there's great black diamond action at the top of the mountain and on peaks 6, 8, and 9. I will say this about Colorado: The runs are l-o-n-g. The longest trail, Four O'Clock, is 3.5 miles. If you're a type-A skier who likes to tally your runs, then one Breckenridge run equals at least two and sometimes three Squaw Valley-Tahoe runs. 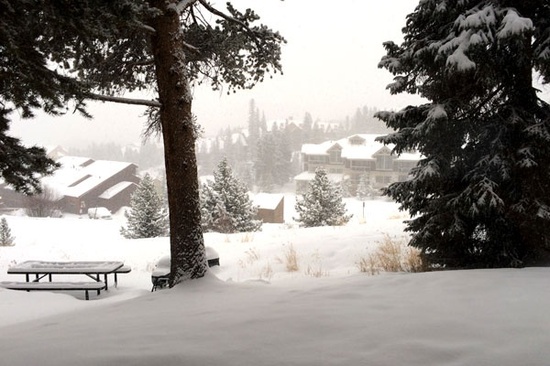 The view from the condo.

I prefer a condo or a house on ski trips so we can cook, play games in front of the fireplace, and watch movies in a comfy living room. They're also usually cheaper than the hotels and lodges. Breckenridge has loads of ski-in/ski-out condo developments and resorts across the base of the mountain. Most mountains have a main lodge at the base and services mid-mountain (cafés, restrooms, and ski apparel shops).

We stayed at the Tyra II condos along 4 O'Clock Run. It was really lovely, private and removed from the hustle of the peaks. Many condos and houses are privately owned, and villa rental sites like VRBO are the best way to find them.

We had a delicious New Year's Eve four-course prix-fixe dinner at the Blue River Bistro on Main Street. Another night, we dined at SouthRidge Seafood Grill. The vibe and décor are underwhelming, but don't be fooled: The food is out of this world. Between mussels in Thai coconut broth and swordfish with clams in a garlic-cilantro broth, I'm sold on seafood in Colorado.

When we ate at home, we stocked up at City Market, a nice grocery store with a good cheese selection and roast organic chicken, and at Amazing Grace, a terrific natural foods store.

Among the loads of après-ski options, we liked Breckenridge Brewery, a microbrew sports bar. Though, really, we prioritized hot tub time over après-ski since our condo was so cozy and, well, we were sore (read: felt old).

Rent your skis in Frisco or Silverthorne on your way to Breckenridge or Vail. Both are right off the 1-70 West, the highway from Denver Airport. You'll get better equipment and a better deal. We rented from Virgin Island Ski Rentals; they were cheery, helpful, and are open early and late for pick-up and drop-off.

Buy lift tickets online ahead of time. Vail Resorts owns Breckenridge and Vail, so a multi-day pass gets you access to both, as well as Beaver Creek, Keystone, and Arapahoe Basin. In good weather, it takes 45 minutes between Breck and Vail. Vail is incredibly fun to ski, and the village can't be beat. Dine at Sweet Basil and have the lobster. But book ahead: You're not alone here. 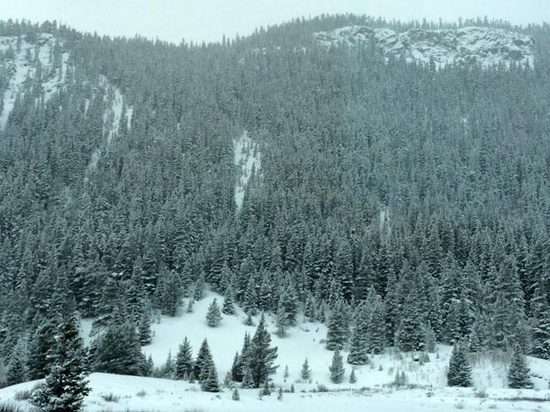 The view from I-70 between Breckenridge and Vail.

Free shuttles run frequently to and from town and the mountain. Most lodging is within a 15-minute walking distance to town.

If you rent a car in Denver, get an all-wheel drive or a front-wheel drive. You don't need an SUV and you definitely don't want rear-wheel drive in the snow. Colorado invests in snow plows, so you don't have to use chains or spend too much on the four-wheel drive option.

If it's snowing, budget two to three times the time you think you'll need to get to the airport. I-70 is the only road, and it really backs up on a snowy day.

Practice your Spanish. Loads of Argentinians descend on Colorado during their summer break.