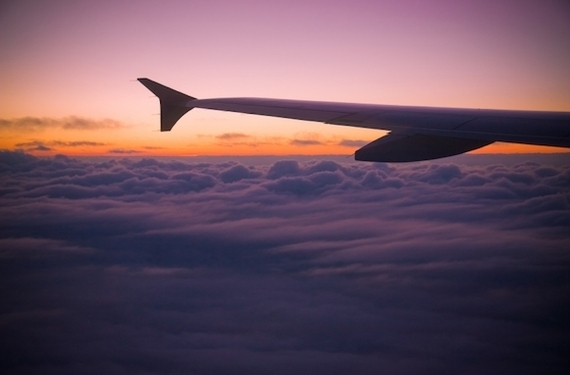 The Mistral is a ferocious and loud wind that, when it blows incessantly for weeks, drives people mad in Provence. There's an old saying that a murder committed after a week of Mistral should be forgiven.

But what about the maddening sound of wind (and jet engine noise) that you experience when you fly, especially on a long overnight flight? It might not cause you to commit mayhem, but trust me, it affects you in ways you might not imagine, causing stress, fatigue, and loss of sleep.

Did you not sleep on your last long flight? Did you arrive an irritable mess? There are steps you can take to change that next time, everything from the plane you choose to fly on to what you do once you're on board.

The reasons you can't sleep well in flight are legion, and some of them are less obvious than others. As much as possible, you want to recreate the same environment that you experience when you sleep in your own bed. Not easy, but the closer you get, the better you'll sleep. Here are ten sleep-killers and how you can defeat them.

Wind and engine noise create stress and are anathema to sleep and relaxation. At home, unless you live near an airport you don't listen to roaring jet engines while you're trying to get some shuteye, so block out as much as you can when you fly.

Tip: bring and wear earplugs (either silicone or foam with a decibel reduction rating of 30 or more). They won't block out all the noise but enough to make a difference. Unless you sleep on your side, put a pair of Bose noise-cancelling earphones on top of the earplugs (don't play music, just turn them on). Flying on a quieter plane helps, too. Airbus A380s fly much quieter, for example, than some other, older models.

Even when all the window shades are down (and there's always someone who throws one up in the middle of the day/night) we now have those seat back video screens throwing off light all night long along with those lighted signs in the cabin.

Tip: wear eyeshades. When I fly at night, I see very few people wearing them. No wonder they can't sleep. They hand them out in some amenity kits on international flights, even in economy class, but they're not great quality so buy and carry your own (Tempur-Pedic makes a great one) or grab one from an amenity kit in first and business next time you pass through at the end of a flight.

How many times have I been deep in sleep on a plane and dreamt that I was in an earthquake only to wake up and find that it was air turbulence? More than I care to recall.

Tip: Choose a seat over the wing, if possible; over-wing seats are more stable than those at the front or rear of the plane (think about a seesaw--if you sit at the fulcrum you move up and down less). And some planes, I've found, experience more shake, rattle and roll than others. An Airbus A380 is going to move less than a smaller A321. (Ask a flight attendant next time you fly which of her company's aircraft have the smoothest ride. She's sure to have an opinion).

You've shut out the light and the noise, but you wake up in the middle of the night with a mouth so dry you'd think you had been chewing dry oatmeal all night. It's because airliners at altitude are as arid as a desert. Sadly, even drinking tons of water before bedding down won't keep your throat, mouth and nasal passages moist. In fact, drinking too much may defeat sleep if your bladder wakes you up.

Tip: fly on a plane made of composites like the Boeing Dreamliner 787 or the forthcoming Airbus A350. The cabin air is humidified at 10 to 15% compared to 7% or so on other aircraft (planes are kept desert-dry in part because metal rusts; planes made of composites have less of an issue). If you wear contacts, you'll find that your eyes remain more comfortable, too.

Alcohol may make you feel drowsy at first but then it comes back roaring in the middle of the night, in part because it will dehydrate you and that's the last thing you need while flying in an aluminum (or composite) can.

Tip: Limit yourself to one glass if you just can't resist that free Champagne (some international airlines still serve it even in economy class).

Tip: You can still look presentable while dressing comfortably--maybe take a page out of Hugh Heffner's playbook and don silk pajamas? Choose loose-fitting clothing made of natural fibers and if you must wear flip-flops or sandals, bring a pair of warm socks on board because cold feet will keep you awake, too.

Planes always seem to be overheated. Most people sleep better in a cool environment.

Tip: ask crew to lower the cabin temperature if it's too hot. If your plane has air nozzles (many do not these days), turn one on at full force.

Ever find yourself waking in the middle of the night in a high-altitude city such as Denver, gasping for breath or perhaps with a headache? It's altitude sickness and it doesn't mix with a good night's sleep. The same thing happens when you fly.

Tip: since aircraft flying at 35,000 feet are pressurized to simulate 8,000 feet or so, flying in a Dreamliner will help you sleep better. They're pressurized at lower altitudes, typically 6,000 feet. You'll notice the difference on a long flight. The new Airbus A350 and new versions of the Boeing 777 (dubbed the 777-X) will also be flying at lower "cabin altitudes".

Watching an action movie or violent TV show before trying to fall asleep is a bad idea, on land or in the sky. If you don't do it at home before bed (and you shouldn't), then don't do it before bedtime while airborne.

Tip: It's hard to resist the large selection of video entertainment we find on planes these days, but read a book or magazine instead.

I've been known to fall asleep even in the most cramped economy seat, but clearly if you choose your seat with aforethought you'll rest more comfortably.

Tip: Pick a window seat so you can at least lean against the wall of the cabin, preferably away from lavatories and galleys, which can be noisier, and, as mentioned, over the wings. Window seats also ensure that a seatmate needing to get up won't wake you. Make the seat even more comfy by bringing your own pillow (ignore the stares from other passengers in the security line, it's the best travel tip I can give you, and no, those neck pillows aren't the same thing but they're better than nothing). Speaking of seats, not all economy class or even business/ first class seats are created equal. Some are clearly more sleep inducing, such as Air New Zealand's new premium economy seats (they're well-padded). Premium econ on foreign-based airlines is worth the splurge at fares far below business or first class.

As you can see, I haven't mentioned artificial sleep aids such as Ambien. I just don't think they provide sufficiently restful sleep. Some fliers swear by lavender oils applied just before bedtime to prepare for a peaceful night's sleep and studies have backed them up. Anything is worth a try to arrive in better shape.