Making just a few changes to your space will practically guarantee you'll sleep better in it.

Add Some Color To Your White Noise
What You Tried: Random, unfamiliar sounds can pull you out of REM sleep and make it hard to fall back into it. Even if you're able to silence every beep, whistle and clang in your home, you can't control nature -- or neighbors. Many people swear by white noise machines, which combine sounds of different frequencies to block out audio interruptions.
What You Should Try: New research highlights the benefits of blended sounds with a consistent frequency. Pink noise, so named because light with a similar power spectrum would be perceived as pink, helped people sleep better and longer -- 75 percent of study participants reported more restful sleep or nap with pink noise than with silence.
Go Pink: The study author told Prevention magazine that people can create this sound at home with fans, apps or gadgets that produce steady, uninterrupted sound, like falling rain or blowing wind.

Make It So Dark You Need Sonar To Find A Dropped Pillow
What You Tried: Light can inhibit the secretion of melatonin, the hormone that is your body's natural sleep drug, which is why turning off overhead lamps helps us feel drowsy.
What You Should Try: You can still detect even a small amount of light -- from your alarm clock or your neighbor's garage -- through closed eyelids. Champion sleepers tell us they've noticed that when they make their room pitch-dark, they wake up feeling more refreshed than when it's just inky-dark.
Black Out: Opaque curtains or blackout shades can block light from outside, especially from the new headlights and street lamps that use energy-efficient LEDs, which emit light in the blue part of the spectrum -- the most sleep-sabotaging of all. Inside the room, clocks with red numbers are less disruptive than ones with white or blue digits; turn yours so it's facing away from you.

Find A Temperature That Makes You Want To Hibernate (All Night Long)
What You Tried: The cold makes us drowsy, and a falling core body temperature helps us drift off faster, says Nancy Collop, MD, director of the Emory Sleep Center in Atlanta. That's why you keep the bedroom cool -- and also because previous experience (that non-air-conditioned cabin during a heat wave) has shown you that it's nearly impossible to fall asleep when you're sweating.
What You Should Try: Specialists usually give a ballpark suggestion of setting the thermostat to between 65 and 72 degrees -- or that it feels just chilly enough so that you need a blanket. However, some cotton-blend sheets and pillowcases trap heat, as do memory foam mattresses. So you may doze off feeling snug, then wake up hot three hours later.
Keep Cool: There's an expanding range of products that claim to regulate your temperature while you sleep, including a brand-new line of cooling apparel from the bedding company Sheex. You could also set your air conditioner's timer to drop a few degrees in the middle of the night, or sleep with a fan.

Create A Personal Nest
What You Tried: You've configured your room to suit your needs. The one thing you can't change? The person you share it with.
What You Should Try: Give up on finding an ideal temperature that suits you both. Women's core body temperatures fluctuate due to hormonal changes during menstruation and menopause (birth control pills can also raise it slightly). At the same time, because women are usually smaller than men, have a different distribution of fat and tend to have icy extremities, we tend to feel cold faster. Sharing a blanket can amplify the heat -- except for when he pulls it off you.
Claim Your Space: Instead of separate rooms, try separate sheets, suggests John Dittami, an Austria-based sleep researcher and a coauthor of the book Sleeping Better Together. Dittami has talked to couples who claim this tactic saved their marriages. Another idea: Put a pillow barrier between the two of you to block some of his body heat and movement.

PHOTO GALLERY
How To Sleep Better, By Emma Haak

How To Turn Your Bedroom Into A Sleep Cave
How To Sleep Better, By Emma Haak 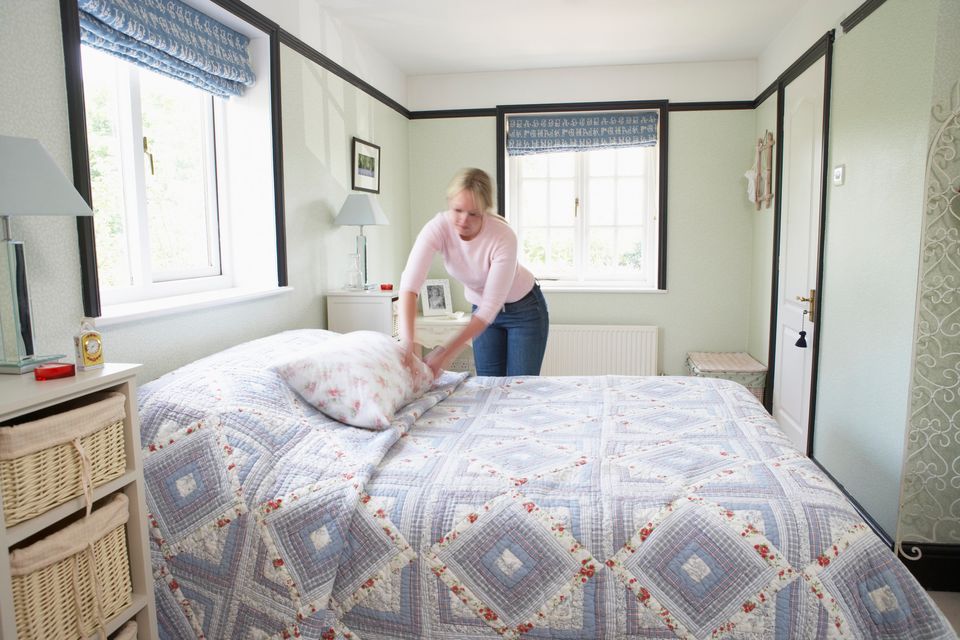 1 / 7
7 A.M.: Make Your Bed
Your mother was right -- you should tidy up those sheets: People who make their bed every day are 19 percent more likely to report a better night's rest, according to a poll by the National Sleep Foundation. "Research shows that people with sleep problems who use their bed only for sleep improve their rest," says Judith Davidson, PhD, author of <a href="http://www.amazon.com/Sink-into-Sleep-Step-Step/dp/1936303388?tag=thehuffingtop-20" target="_blank"><em>Sink into Sleep: A Step-by-Step Workbook for Reversing Insomnia</em></a>. Plus, when your bed is neat and tidy, you're less tempted to crawl in to read a book or talk on the phone.
Thinkstock