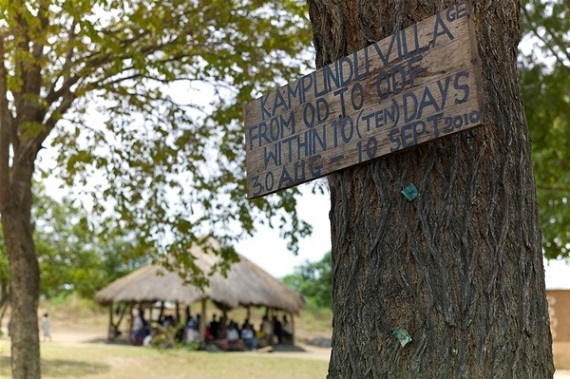 Today UNICEF and WHO released a report on how the world has done on water and sanitation against the Millennium Development Goals. It's a mixed picture.

On water, there has been undeniable and remarkable progress. Even if it has not yet reached everyone, 91% of the world have adequate drinking water, and the numbers are growing rapidly. The MDG target was surpassed, and I believe we can have universal access within the next 15 years.

Sanitation is a different story. It is not an exaggeration to say that the one of the biggest health threats children face -- diarrhea -- is precisely due to the fact that 2.4 billion people -- 1 in 3 worldwide -- do not have a good enough place to defecate. Some 946 million of those don't have any toilet at all, and just use the nearest field, pond, river, or seashore.

What has gone wrong?

Actually, much has gone right. Approximately 2.1 billion people gained access to sanitation in the last 25 years. However sanitation was starting from a much lower baseline (54%) than water (76%). Now coverage is at 68%, but even if it had been reached, the MDG target would still have left out a quarter of the population of the world.

The success on water shows the power of global single-mindedness and focus. The value of clean water was easy to understand and see, so the effort was united, urgent, and ultimately successful.

Sanitation, on the other hand, was not as "sexy" as water. Moreover, it had to overcome the enormous hurdle of very strong cultural norms, and the link with health was less clear to communities.

The years have shown that actual availability of toilets is only half the battle. People also have to understand their importance and decide to use them. Many people don't see any reason to change the habits of generations. Added to which, toilets are expensive, need specialized infrastructure and space, and, crucially, need to be maintained. They stink when they get full, so back folks go to the bushes and rivers. Thus contaminating the environment, including the water being piped back into homes and communities. It becomes a vicious cycle with serious effects.

Childhood stunting in South Asia, the highest levels in the world, is robbing the region of its future. Stunting is chronic malnutrition, which is linked to frequent bouts of diarrhea, depriving a child of nutrients and causing irreversible damage. Weak, sick children grow up, if they grow up, into weak, sick adults.

Another region of concern is sub-Saharan Africa. There population growth is outstripping the ability of governments to provide services, such that even though rates of open defecation have come down, the number of people practicing is higher now than in 1990. That region also has high child mortality levels.

I believe we need:

1. Accountability: The new Sustainable Development Goals are set to call for ending open defecation by 2030. It won't happen unless we double the current rates of progress. And that won't happen without government leadership, global investment, and focus. We must hold our leaders accountable for leaving no one behind.

2. Adaptability: We must change the top-down approach. UNICEF's Community Approaches to Total Sanitation, where the communities themselves take the lead, has helped around 26 million people in over 50 countries to end open defecation since 2008. We need to expand this kind of community based programme - because that is what works.

3. Sustainability: Following the Gates Foundation's lead, we must harness the newest technology, and set the brightest minds to the task of making sanitation accessible to the poorest people. Toilets have to be affordable and usable in crowded slums as well as in the deepest rural areas where traditional sewer lines do not go. It means we have to reinvent the toilet. Now.

We cannot enter the new development era without new ideas and plans.

But we can do this. We must.