As a young girl, I was encouraged to voice my opinions and stand up for what I believed, yet I received only minimal training in what to do when others did not agree or had a negative response to what I was saying.

The advice I received was not to take their reactions personally, to focus on the positive, or to "let it go" when my position was attacked or criticized.

That didn't work for me then, and it doesn't work for me now. In fact, I've made it my mission to seek out opinionated, strong, and intelligent women who are willing to honestly discuss their struggles in gaining respect and understanding with their words.

Last week, a hot prospect showed up in my inbox. My editor emailed, urging me to watch the February 23rd edition of The Nightly Show with Larry Wilmore.

She said, "Watch what happens to the only woman on the panel, Republican strategist and CNN Commentator Tara Setmayer. Although her political views are different from mine, I couldn't help but notice how badly she was treated, particularly by Wilmore."

I immediately watched the show online. As a former Communications Director on Capitol Hill, Tara had clearly earned her place on the panel, yet as the only politically conservative guest, she was bound to take a few hits. 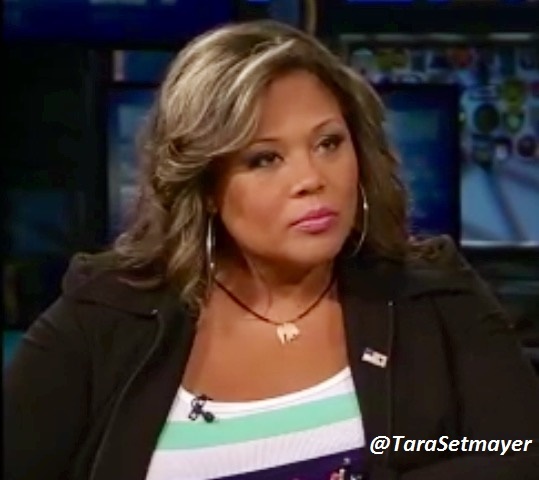 As I watched the show, she seemed unaffected by the audience yelling "boo" or by the multiple times she was interrupted during the discussion. But the question directed at her in the Keep It 100 segment was such an unfair setup, I thought to myself, "How can she not be irate?"

Larry Wilmore asked each person a question that required a 100 percent honest answer. The three men on the panel got easy questions guaranteed to provoke a funny response. Tara was asked whom she would choose for president if the options were (a.) a black female Democrat who is soft on terror and also one of her best friends since childhood, or (b.) a racist Republican who is unquestionably tough on terror.

No matter what her answer was, it could discredit her with African Americans or women or her fellow Republicans. To me, that crossed the line of appropriateness. If the questions for the male panelists had carried the same biting tone or put them in an impossible position, I might have shrugged it off, but they didn't even come close.

With fingers crossed, I contacted Tara, hoping she would "Reveal what's real" about her experience on the show. She agreed, and our conversation was enlightening.

You can listen right here.

The interview began with Tara admitting that she knew she was walking into the lion's den. As a tough Jersey girl who isn't afraid to debate something as emotional as politics, she knew her position wasn't going to be popular with the panel or the audience, yet the issue was important to her and she wanted to provide balance to the conversation as a conservative, female voice.

When I asked her how she felt about her Keep It 100 question, she admitted that it angered her -- and it also upset her mother who was in the audience.

But guess what? After the show, she let the producers know how she felt!

Tara explained, "As women, we should feel 100 percent empowered to stand up for ourselves, speak up when we think there's been an injustice or we've been wronged. That's partially the motivation for why I do what I do. Yes, I have certain political perspectives, but my motivation, really, is to inspire people to speak up when they think there's an injustice. Do not be bullied into silence."

She wanted the producers of the show (and, I presume, Larry Wilmore) to be aware that she felt ambushed. Moving forward, she told them, perhaps they could reconsider the kinds of questions they were asking. She said, "Whether they do or don't, that's their prerogative, but I felt my voice needed to be heard."

The Nightly Show wound up apologizing profusely. They said it was not their intention to be unfair.

Their reply isn't what interests me. What's riveting is that Tara didn't "let it go" or squash her feelings with a positivity mantra. She didn't wonder if she deserved to be mistreated or if she was being too sensitive or emotional. She KNEW she had been treated unfairly.

She also did not demand an apology or try to shame or blame them. She simply told them what they had done and how it affected her. She had set a standard for herself, and she wanted to uphold it.

I've heard it said that we can teach others how we want to be treated. Tara exemplified that beautifully in the way she acknowledged her uncomfortable emotions and provided feedback on how it made her feel. Having done that, she was then able to "let it go."

I'm hoping that my interview with Tara inspires multiple generations of women to find their voices, so they can advocate for themselves and advance their careers through the power of their words.