These easy strategies actually save you money -- and offer insight into your financial unconscious.

Clean Up Your Dirty Benjamins
And the Hamiltons, Jacksons and Grants, too. Subconsciously, we think old, grimy-looking bills are worth less than clean, crisp ones. And so...we generally spend them faster and more freely, found a study published in the Journal of Consumer Research. Luckily, there's a simple solution: If possible, ask for newer bills when getting cash back.

Bonus: Paying with clean bills might get you a better deal: A field study at a farmers market found that sellers more frequently overcharged customers after touching grubby banknotes than new ones.

Merge Your Accounts
Most of us have at least four accounts (savings, checking, a joint account, and PayPal, for instance). Researchers at the University of Utah found that when funds flowed in and out of just one place, the study's spenders found it easier keep track of their bottom-line net worth. The result: They spent 10 percent less of their money.

Bonus: The next best thing to having a single account is an all-on-one-page overview. For this, check out Mint.com, an app that aggregates all your financial information (daily) and displays it in a colorful interface -- helping you track spending patterns. Extra bonus: It's free.

Drink Up
Your money-saving strategy for the mall is to chug down at least five cups of water, wait for 45 minutes (while browsing) and then hold it in. When subjects in experiments at the Netherlands' University of Twente did exactly that, they made significantly better monetary decisions. The explanation: The effort involved in holding in it has an "inhibitory spillover effect" -- a boost in overall self-control, concluded the study’s researchers. (Who knew Kegels have so many benefits?)

Bonus: Research has found that mild dehydration is a cause of mild depression. If you're the type to shop when you're down, those five cups of fluids -- not the $280-an-ounce royal jelly rejuvenating cream -- may help lift the blues.

Choose Your Highest Heels
You're shopping for a printer, and there are three options: the no-name cheapo, the midpriced workhorse and the bells-and-whistles Bentley. Normally, you'd splurge, but not when you shop in high-heeled shoes. A study at Brigham Young University found that when shoppers have to make an effort to maintain their balance, they usually go the midpriced item. It's a "crossover effect": The physical act (the effort to stay steady) influences mindset (attraction to the middle). Ergo, when shopping in Louboutins, one might not buy Louboutins.

Bonus: Attention, online shoppers. Anything you do that requires balance is financially moderating, the researchers report -- including yoga, leaning back in a chair and standing on one foot.

Shop With Your Mind Full
Research has shown that the more relaxed (physically and mentally) shoppers feel, the more willing they are to spend on products (for instance, a digital camera). When we feel chilled out, our brains don't perceive threats. This lets us think more abstractly, which is inspiring ("I'll use it to record memories!"), but it also leads us to overestimate a product's value and overspend. When shoppers were in a pleasant-but-not-so-serene state (the somewhat preoccupied mode we're in after work or when ticking items off a to-do list), they had a realistic sense of what things were worth. The difference: They'd spend 15 percent less on a given item.

Bonus: If you can shop on a weekday morning before work, chances are you'll have the store to yourself. And your time-constrained self won't buy more than intended.

Whip Out Your Pics, Not Your Wallet
Reach into your bag for the photo you keep of the college your daughter wants to attend someday -- or the Japanese-style cedar-walled bathroom you'll build when she moves out. Anything, as long as it's a visual reminder of your commitment to a big-picture goal. Researchers at the Universities of Toronto and Virginia found that when people kept a photo of their kids tucked away with cash that was earmarked for savings, they were significantly less likely to spend the money.

Bonus: For perhaps the ultimate visual nudge, visit Merrill Lynch's "Face Retirement" page, and upload a photo of yourself. Designed to inspire us to save money for our future selves, the app ages your face so you can see how you'll look at 70 and beyond (up to age 107). Research finds that when people see digital renderings of themselves as old people they're likelier to pass on immediate rewards and allocate more resources to savings (or future spa treatments).

Convert the Cost Into Ramens
We love this tactic described by finance blogger Emily Guy Birken at MoneyNing.com. Keep your spending in line with your budget by converting the cost of an item into units you know well. In Birken's example, this was ramen noodles, which cost 25 cents per packet. While a shirt that's on sale for $50 might seem like a bargain in its context, it costs 200 ramens -- a price that might make a dedicated noodle-eater think twice. Make up your own (personally meaningful) unit of currency -- hot dogs, Rieslings, interest payments, anything -- and divide the cost of an item by it. One jacket or one month's interest payment? Still a good deal?

Bonus: The mere thought of cost, currencies, budgets or any other money-oriented words could be enough to curb overspending. A study at Bates University in Maine found that calling to mind financial concepts strengthens self-control.

OWN Simplify Your Life Own Spend Less Finances Money 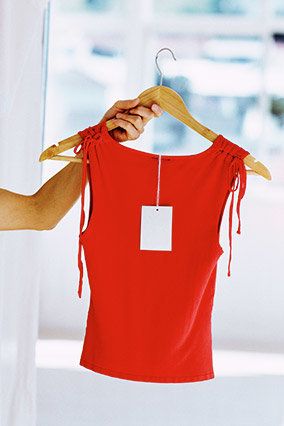 1 / 8
Having Dry-Cleaning Amnesia
That silk blouse or pair of wool trousers may be a great bargain -- right now. But clothes made of delicate, shrinkable and otherwise finicky fabrics require frequent trips to the dry cleaners, effectively raising their price by -- depending on where in the country you live and what the item is -- $3 to $10 every few wears. (And the <a href="http://money.cnn.com/2012/06/04/smallbusiness/dry-cleaning-prices/" target="_blank">cost</a> of dry-cleaning has gotten even higher this year as those disposable metal hangers get more expensive.) Instead, look for materials that have the same luxurious feel but can be tossed in the washing machine. And when you can't avoid dry-clean-only fabrics, spot-clean and even steam them at home to help them stay fresh longer.
Thinkstock