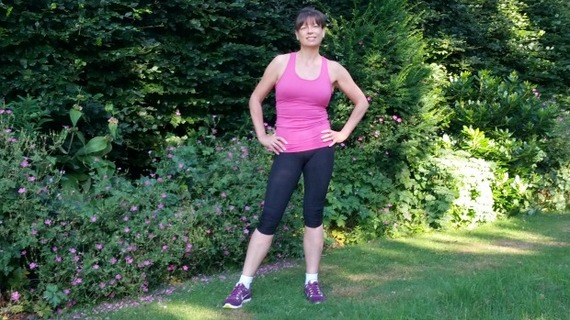 After years of no exercise, High50's Kate Battersby has become a real runner, and says the sport has given confidence and shape to her life. She tells how she got started and shares her tips for beginners

I am a runner. Now excuse me while I howl with laughter. After all, in the words of my late father, I am a couch potato. I like sitting down. Or lying down, preferably, and being brought stuff so I don't have to move.

Back in July, at the age of 50 and seven months, I had done zero exercise in years other than walking my dog. Yet here I am, in October, running five times a week.

What brought about the epoch-making change? Get ready for the answer, because it's big. Revolutionary. Life-defining. The answer is... I kind of felt like trying it out. Um, that's it.

I wasn't overweight and didn't have high blood pressure. I just thought some sort of exercise might be a good thing, although I hated the idea of a gym -- forking out a ridiculous sum I didn't have, then failing to attend through sloth and dread of the Magic People.

You know them, right? The motivated ones, who like getting up early, or indeed getting up at all.

They look marvelous without makeup. Untroubled by globs of sweat, they exhibit either a glistening sheen or, in the manner patented by Roger Federer, defy biology by apparently not sweating at all.

Above all, their hair does not acquire the look of a shoulder-length Brillo pad when they exercise.

I am not one of the Magic People, but my friend Katherine is. She's in her mid-50s, and has been into running since she was 17. She recently ran a 10K in 49 minutes.

There is a photograph of her taken at the end of a half-marathon, where she looks as I might after two hours in hair and make-up, except better. Worst of all, she is annoyingly great as a person, so I can't even slap her.

On the strange afternoon at the end of March when I felt vaguely like trying out running, she said she would come with me, and mostly, she still does. She has become my mentor, always encouraging me that I am doing marvelously when I am purple, bovine and gasping.

Top Tip One: If You Can, Find Yourself A Katherine (A Reliable, Inspirational Running Buddy)

Top Tip Two: Get Running Made Easy by Susie Whalley and Lisa Jackson

Self-help books are usually the refuge of the doomed couch potato, but this lazybones-friendly book breaks down the unconquerable mountain into climbable molehills.

Top Tip Three: If You Are Female, Buy A Sports Bra

I felt absurd going into a fitness store when I had not yet run a step, but found them very helpful. The Shock Absorber Run Sports Bra proved a great buy.

And so we arrive at August 1, my chosen date to start running.

Top Tip Four: Stretch Before And After.

Running Made Easy or the internet will advise. Then put one foot in front of the other and start running.

Great -- except that by 200 yards you need a double lung transplant.

Top Tip Five: Don't Worry, This Is The Same For Everyone

Top Tip Six: Don't Stand Still As You Gasp, But Walk (Or Stagger) Until You Feel You Can Run Some More

Top Tip Seven: Don't Do More Than Half A Mile On Your First Day

How marvelous I felt. Next day, not so much. Limbs of concrete -- yet it has never happened again. My guess is that this is partly down to stretching, which I have never skipped, and also to top tip eight: slow down. You are more likely to complete your chosen distance without having to stop if you resist mad exertion near the start.

I began by running every third day, and gradually that first 200 yards became 400, and 800. In about a month I ran a whole mile without stopping and began running every other day.

Almost at once I managed two miles. I had to stop for 12 days at one point because my left knee didn't feel good, but I stretched religiously through the 12 days, and have had no further problems.

Beware, though. Running gear is expensive. Running is free, but the accessories are not and there are more of it than you might think.

As I became sure I would continue running, I acquired a second bra, two pairs of capris (leggings cut off just below the knee), two vests, two long-sleeved tops, two zip-up fleece tops (far easier to remove in mid-run than pulling something over your head), two pairs of running socks and some really good shoes.

My total spend so far is $515, and that's without the long leggings and waterproof top I will need for winter.

But the outlay is worth it, never more so than with my tenth top tip. At up to $15 a pair, cushioned running socks sound like an indulgence for posers, but nothing is likelier to deter a novice sooner than blisters. Katherine directed me to Thorlo socks, and they are indeed bliss.

After two months, this lead me to my final tip.

Top Tip 11: Get Your Gait Analyzed and buy some really good shoes. Lots of sports stores offer this service.

At on fitness store, I tried out five pairs of shoes on their treadmill and was analyzed as a right foot pronator, don't you know, before investing $160 in a pair of Nike Lunarglide +5s.

"Test them over all terrain, and if they're not right, just come back within 28 days so we can try you in something else," said the assistant, encouragingly.

Now I am up to running two days on with every third day off, almost covering three whole miles in 30 minutes. This may be the height of my ambition. I don't see myself running 10K (about six-and-a-half miles), or a half-marathon, never mind the full 26.2 miles, although I will try a 5K Park Run soon.

My target is to make running part of my life. Of course these are the easy months of summer, and it will be a sterner test when wet, short days are the norm. But I feel good. Even though I really like jogging the most when it's over.

Since September, I have not skipped a single run, actively looking forward to each one. Strange, as I find the running itself hard. But there are whole seconds when I quite like it, especially when it's over.

Peculiarly, I find I am interested in healthy food, with my taste for sugary junk disappearing. Others think I have lost weight, even though I haven't and my clothes fit the same.

Above all, I like the framework running gives my life. I seem to be getting on with stuff. I have purpose. So my final top tip is... if you feel like it, do it.

Rest assured, I have not become one of the Magic People. I am purple by the end of the run. My lungs heave. I look hideous.

But I am doing it. I am, unbelievably, a runner.

How To Train For A Triathlon

Is It Too Late? Learning to Ski in Mid-Life