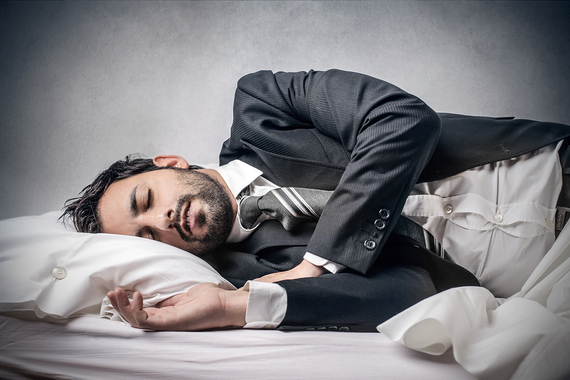 After dinner with the kids in bed, you slip into your home office for a few hours of uninterrupted work time. Finally, when the clock strikes midnight, you drop into bed, utterly exhausted. Instead of counting sheep, you count deals, revenue, sales leads in the pipeline, and all the things left undone. You toss and turn. At 5 a.m., your alarm alerts you that it's time to do it all over again. And so it goes...

Prolonged wakefulness is reaching epidemic proportion, but I didn't need to tell you that. You live it each day. In fact, Gallup's recent study reported that we're getting an average of 6.8 hours of sleep, slightly below the recommended 7 hours of sleep per night. Between work and parenting, over half of those surveyed under the age of 50 are the most sleep deprived with 46 percent snagging less than 6 hours of sleep each night.

It comes as no surprise to anyone -- the number of hours we're working is increasing. Our leisure time is much more active, too. Seldom do we slouch in our Barco lounger, like Dad, after a long day at work. We're hiking, biking, and running. Our "down time" is anything but low energy.

Implications of Sleep Deprivation
Ambitious entrepreneurs tolerate long days of work physically. It's the mental aspect, however, that really kicks our performance. Sleep deprivation unquestionably impacts cognitive performance -- one of the most important aspects of building a successful enterprise.

It impairs our ability to focus, furthers distractions, and affects our working memory. When sidetracked from a task, you may even ask, scratching your head, "What was I doing again?" Sounds only too familiar, doesn't it?

With sleep deprivation comes slowed responses that influence speed and accuracy. It disturbs creativity, language, and executive functions such as decision-making -- the most powerful asset for entrepreneurs.

Although the high level of motivation for which most entrepreneurs are known compensates for a decrease in performance, sleep deprivation beyond a day or two greatly diminishes returns. In fact, prolonged sleep deprivation is comparable to "legal drunkenness".

An article entitled, Sleep Deficit: The Performance Killer, addresses the confusion between sleeplessness, vitality, and high performance. It appears that our culture of performance has influenced the belief that if we're not moving at 150 mph all the time, we must be slackers. It's the behavior we applaud--wrongly!

Performance Management 101
If you want to raise and sustain performance, pay attention to the amount of sleep you're getting. Make it a priority. However, on those rare occasions when sleep deprivation gets the best of you, consider these fatigue management tips:

Of course, short-term fixes are only band-aids on a gaping wound. Sleep deprivation is not a sustainable strategy that aligns well with performance and goal achievement. Therefore, you must also consider the following actions:

The bottom line? The occasional bout of sleep deprivation is easily managed. However, when sleep deprivation becomes a way of life, you're not only hurting yourself physically, you're greatly impairing your ability to perform which influences your power to succeed.

How To Stay Sharp When You're Sleep Deprived first appeared on Synnovatia.