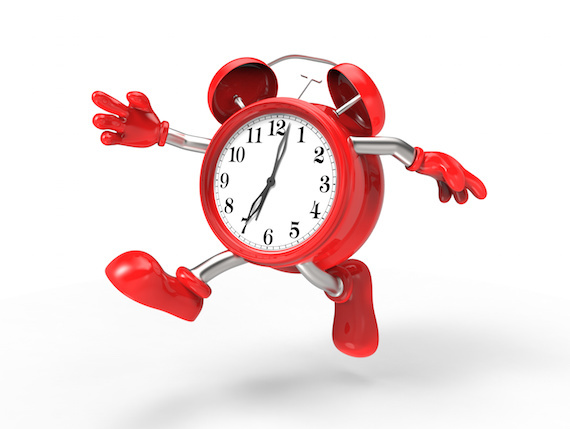 You're late everywhere. Troubling, isn't it?

You know punctuality would keep you on good terms with your colleagues, your clients and your boss.Yet you're perpetually tardy, and it's hard--almost impossible--to be early.

And this is disturbing.

Diana DeLonzor, author of Never Be Late Again, conducted research on the chronically tardy. The majority of those she interviewed hated being late. Diana says that telling an always-late person to be on time is like telling a chronic overeater, "Don't eat so much."

Which one(s) are you? (You can be in more than one group.)

You arrive late every day, but you don't think you have a problem. You blame other situations. Traffic was slow, or you simply had a lot going on that day. But when someone calls you out about being late, you dismiss them as inconsiderate.

Here's how you can start being on time. Admit you have a problem. Everyone encounters delaying situations, but not everyone is late all the time. If you're always delayed, maybe you're miscalculating how much time you need to get to where you need to be.Leave earlier than you usually do. If you usually leave the house at 7:45 a.m., make a point of leaving at 7:15 a.m.. You'll likely be early, but that's better than the opposite.

Your schedule is jammed with massive to-do lists. In an hour, you plan to take the dog for a walk, take a shower, prepare breakfast, and take the kids to school.But you're still surprised and stressed when you arrive late.

Here's how you can start being on time, Schedule fewer activities. Plan out your to-do lists for two weeks in advance and track your time.You'll be surprised the 20 minutes you allotted for your shower are more like 30 minutes.

You procrastinate on everything. Nothing gets you going unless you're under pressure. You wait until the last minute to head out the door. It takes you 25 minutes to get to work at 8:00 a.m., so you always leave the house at 7:35 a.m., leaving you vulnerable to heavy traffic and other obstacles.

Here's how you can start being on time. Procrastination is working against you. Just like the rationalizer, the best medicine for your tardiness is simply to leave earlier. Stop putting off your departure time to the last minute.Set regular alarms 30 minutes in advance of when you usually leave for work, and other upcoming appointments.

You lack self-control. You hit the snooze button on purpose and drift back to sleep. You would rather feel gratified by staying in bed an extra few minutes and then having a second cup of coffee.

Here's how you can start being on time, Why not reverse the process of getting your gratification? Plan on arriving earlier than the early arrivers. Make it fun, track your progress, and reward yourself when you "win." This will also give you a chance to be in the early arriver's shoes and experience the feeling of having to wait for those who are late.

Do you get accused of not paying attention?You've forgotten the appointment date and when you do remember, you can't find the keys, your wallet, your phone . . . In fact, you've been known to cancel appointments or call in late to work because it took you so long to find those things.

Here's how you can start being on time. Create a drop zone--a designated place for those things you have trouble finding. Plan ahead--look up the address of where you're going the night before.Set reminders on the calendar, your phones, sticky notes--wherever you know you'll see them.

You know you can be on time if you want to. In fact, you're on time when you feel it's truly of value to you. But you're usually late because you silently resist rules and authority.You probably can't stand your boss, so you strike back by arriving late to his or her meetings.

Here's how you can start being on time.

Instead of striking back, call for a meeting during which you can resolve the issues bothering you. Be a team player. Remember, you voluntarily took the position you have and you agreed to abide by the rules. Live up to your promises before you lose your job.

You suffer from low self-esteem. You set low standards for yourself. This low self-esteem may be causing you to suffer from anxiety and depression. To avoid potentially uncomfortable situations, you engage in avoidance and perfectionism.

It can take you hours to decide on what clothing to wear in the morning. You put on one outfit, but the reflection in the mirror disappoints you, so you pick another one . . . and you're running late again.

Here's how you can start being on time.

You may require professional help to overcome this type of behavior. But first, try this. Track which decisions keep you occupied for too long in the morning and then make those decisions the night before. For example, you might lay out your clothes for the next day before you go to sleep at night.

The honest truth. Punctuality is key to professionalism.

Being punctual will make your boss and clients trust you more.You'll avoid receiving that dreaded pink slip, and you'll avoid irritating clients who could bring you good business.Start now, and however, slow your progress is, don't give up.

Ann Davis is on a mission to help people break away from limiting beliefs and create habits that will help them discover their skills and boost their income.
Join Ann Davis at Boost Your Skills Boost Your Income. follow her on twitter