You know soda's not exactly good for you -- but at the same time, it can be hard to resist. Its sweet taste, pleasant fizz and energizing jolt often seems like just what you need to wash down your dinner, get you through an afternoon slump or quench your thirst at the movies.

But the more soda you consume (regular or diet), the more hazardous your habit can become. And whether you're a six-pack-a-day drinker or an occasional soft-drink sipper, cutting back can likely have benefits for your weight and your overall health.

The biggest risk for regular soda drinkers is the excess calories, says Lona Sandon, RD, assistant professor of clinical nutrition at the University of Texas Southwestern Medical Center. "The calories in regular soda are coming entirely from added sugar, and you're not getting any value in terms of vitamins or minerals, or even good quality carbohydrates," she says.

But soda may also be causing other types of harm. Studies have shown that its consumption is linked with tooth decay and diabetes, and it also seems to be bad for your bones. "It may have something to do with the phosphorus in soda, or it could be that people are drinking soda instead of other beverages -- like milk -- that have nutrients necessary for healthy bones," Sandon says.

Sugar-free sodas may not have any calories, but that doesn't mean they're any good for you. In fact, they may not even help you lose weight. (Research on this topic has been mixed, at best, but several studies have shown that diet soda drinkers are more likely to be overweight or obese than regular soda drinkers.)

Plus, diet drinks have many of the same health risks as regular soft drinks, including tooth decay and bone thinning, and they've also been linked to heart disease and depression in women. Switching to diet sodas may be a smart first step if you're trying to eliminate excess calories, says Sandon, but your best bet is to eventually give them up, too.

Here's how to make the transition easier.

Wean yourself off slowly.
That news may be enough to convince you that you should stop drinking soda, but it could still be easier said than done. "People really can become addicted to soda, so you have to be a realist and not an idealist," says nutritionist Stefanie Sacks, author of the forthcoming book What the Fork Are You Eating?. "I don't recommend going cold turkey; you need to wean yourself off, just like you would anything you've become dependent on."

If you typically drink multiple servings of soda a day, Sacks suggests first cutting back to one a day. Give that two weeks, then switch to three sodas a week. "It gives you a chance to adjust gradually, which should lead to real, sustainable change," says Sacks.

Mix it with water.
Sandon also recommends weaning yourself slowly off soda, and sometimes suggests that her clients start drinking half-soda, half-water. "You're automatically drinking less and hydrating and filling up with water, which is a good thing," she says.

But there's an added advantage, as well: "It cuts back on the sweetness you get from soda, which is one of the things people get really used to. If you're drinking less sugar, your taste buds will change and soon you won't need that sweetness anymore." 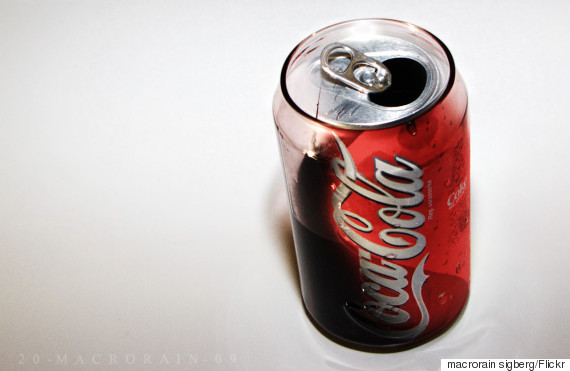 If you're blindly throwing back colas without stopping to think of their impact on your waistline, you could be in for a rude awakening: Each 12-ounce can of Coke, for example, contains 140 calories, while a 20-ounce bottle has 240. (In comparison, here are some smarter snacks for just 200 calories -- with filling protein and fiber, to boot.)

Downloading a calorie-tracking app may help you realize just how much those beverages can affect your daily calorie consumption -- as long as you actually log in and record each serving. Instead of pouring yourself refill after refill, start paying attention to how much you're actually drinking; once you do, you may be more willing to cut back.

Do the exercise math.
Another way to quantify the calories you're drinking is by thinking about how much exercise it would take to burn them off. In a 2014 Johns Hopkins University study, researchers placed signs in corner stores stating that a 20-ounce bottle of soda would take 5 miles of walking or 50 minutes of jogging to burn off.

These "advertisements" worked: When teenager customers saw these signs, they were more likely to buy a smaller soda, a water, or no drink at all. "When you explain calories in an easily understandable way such as how many miles of walking needed to burn them off, you can encourage behavior change,” said the study authors.

Switch to unsweetened tea.
Need that jolt of caffeine to wake up in the morning? If you're not a coffee drinker, Sandon suggests sipping on unsweetened iced tea instead. "It can be just as refreshing, and there are real health benefits to drinking the phytochemicals in tea," she says.

If you don't like the taste of plain tea, mix in some lemon, mint, or a small amount of sugar or artificial sweetener -- at least during your transition-from-soda phase. The important thing is that you're aware of, and in charge of, exactly what's going into your drink and how much is added.

Drink a glass of water first. 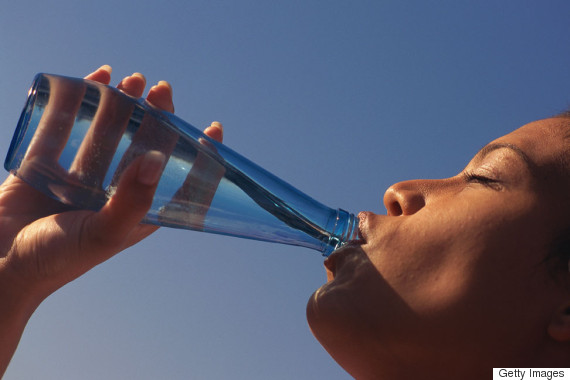 Whenever the urge to drink a soda hits, fill up a big glass of ice water and finish that first. "A lot of times, people drink soda just because they're bored, or they're thirsty, and that's what's available or that's what they're used to," says Sacks.

If you're still craving a soda after you've downed your H2O, then you can reconsider whether it's really worth it -- but chances are your thirst will be quenched and you'll feel satisfied from just the water. (You can make this work while you're out and about, too, by always carrying a bottle of water with you.)

Treat yourself to natural brands.
When Sacks has successfully weaned her clients down to just a few sodas a week, she often recommends they switch to a brand with fewer artificial ingredients. "They're more expensive, but you'll be drinking them less often," she says. Sacks likes Grown Up Soda, Santa Cruz Organics and Blue Sky because they don't contain high-fructose corn syrup or artificial ingredients, and generally contain less sugar than the big brands. "They're an overall healthier choice, especially if you're only drinking them occasionally."

Give seltzer a try.
If it's carbonation you crave, try drinking plain or flavored seltzer water, suggests Sacks. You can buy seltzer by the bottle, or make your own at home with a SodaStream machine.

"Toss a little fruit juice in there for flavor, and eventually change that juice to fresh-squeezed citrus," says Sacks. "That way you still get the bubbles that you love in soda, but you're in control of how much sweetness and sugar is added."

Class up your water. 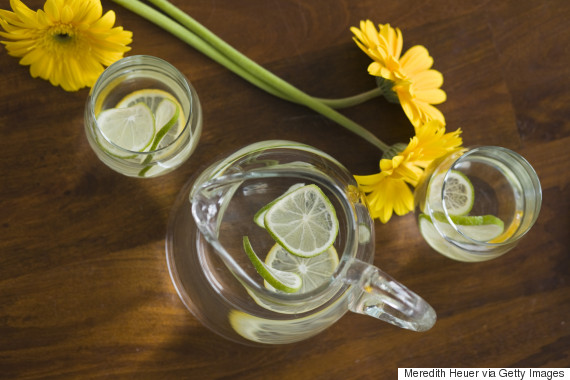 Even still water (or non-bubbly) can be made more palatable with the addition of some fruit or natural flavors. "People tell me they don't like water, but often they just need to experiment with new ways to drink it," says Sandon.

She recommends adding lemon, orange or cucumber slices to a pitcher of water in your refrigerator, which can serve as a detour when you go hunting for a cold soda. Frozen berries and fresh mint can also be tasty additions to a cold glass of HO.

Buy caffeine-free.
If you drink a lot of soda and you're not quite ready to give it up, try buying caffeine-free versions instead. You may start drinking less without even realizing it, suggests a 2015 study published in the British Journal of Nutrition. In the study, participants were split into two groups and all told to drink as much soda as they'd like for the next 28 days. (One group got regular, one group got caffeine-free.) Even though there was no noticeable taste difference between the two, the caffeinated group drank 53 percent more over the next month -- about 5 ounces a day. When our bodies get used to regular caffeine, we crave more of it, say the study authors, prompting us to drink more.

Steer clear of soda triggers.
You may notice that you only drink soda in certain places or situations: In the afternoon at the office, for example, or when you eat at a certain restaurant. You may not be able to completely avoid these scenarios -- you've still got to go to work and should still enjoy eating out -- but you may be able to change those bad habits.

If it's the office vending machine that tempts you to buy a soda every day, try to stay away from it in the afternoon -- and pack your own healthy beverage or a refillable water bottle so you have an alternative. Or if you tend to crave soda with a certain type of food, try restaurants that offer other options instead.

Try it for two weeks. 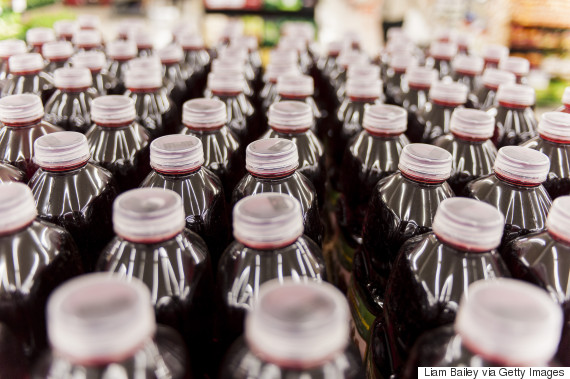 Weaning yourself off something gradually works best for most people, says Sacks, but some may want to try the cold turkey approach. If you plan to go that route, think of it as a temporary change: Giving soda up for two weeks or a month may be easier and more manageable than ditching it forever.

The best part about this trick? Once your time is up, you may not even want to go back to soda -- at least not at the frequency you drank it before. "We acquire a taste for sugar depending on how much we have on a daily basis," says Sandon. "If you cut out soda for a while, you may be surprised at how sweet it tastes ones you go back." (Want extra help with the cold-turkey method? Enlist friends to take the challenge with you.)

Save it for special occasions.
Once you're able to break your regular soda habit and the drink loses its grip on you, it can be treated just like any other junk food: If you really love the taste, there's nothing wrong with an occasional indulgence, says Sacks. "If it's your gotta-have-it food, then by all means splurge on a soda now and then," she says. In fact, knowing that you can have a soda on your cheat day or during a special night out may help you resist them on a more regular basis. "Just do it from a place of education: If you understand that soda is essentially just sugar and artificial flavorings, then you can be more smart about when or if you're going to drink it."

More from Health.com:
Should You Rethink Zero-Calorie Drinks?
10 Artificial Sweeteners and Sugar Substitutes
10 Easy Ways to Slash Sugar from Your Diet