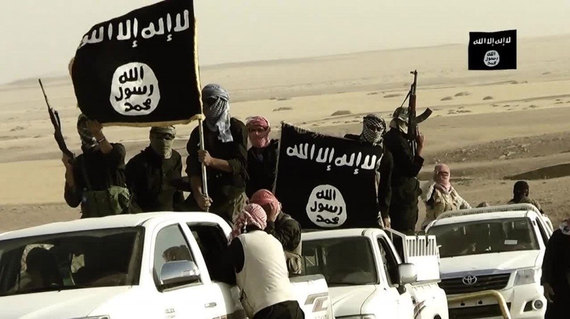 Day Donaldson via the Speaker - News

Anti-Muslim sentiment in the United States is at an unprecedented level, fueled by mainstream media and GOP rhetoric. The most likely to feel confused, hurt, and estranged by this alarming trend are young American Muslims. ISIS, as we know, seeks to capitalize on this state of affairs. How can Americans (and especially American Muslims) at large help ensure that these youth don't succumb to the jihadist ideology which claims to offer them a chance to transcend their alienation?

Hopefully, by now, we've already discussed the obvious with them. No, ISIS doesn't represent Islam. Yes, Western imperial intervention in the Middle East--whose history is far bloodier than that of modern-day jihadism--was integral to ISIS' formation. No, ideology is not always the primary cause of terrorism. But we need to go further. We must concentrate on the ways in which ISIS manages to recruit vulnerable Muslim youth in Western societies. As it turns out, for all the apparent coherence of the group's bloodcurdling ideology, its message is duplicitous and self-contradictory. In fact, ISIS' lofty theology of a divinely ordained utopia with no attachment to earthly delights conceals its obsession with carnal desire.

On its face, their theology may seem quite consistent. ISIS literature is awash in familiar Islamic vocabulary. This world (dunya) is full of sinful enticements, nowhere more so than in the lands of the infidels (kuffar). Therefore, Muslims must unite under the banner of the caliphate and find fulfillment in life under God's law. That entails renouncing one's pride, which leads to envy, arrogance, enmity, and ultimately unfaith. It also requires giving up one's love for the luxuries and treasures of this world, and overcoming that "most dangerous desire" for wealth and power. Indeed, to be enamored of a king's life in this world is precisely to lose one's religion, and had the kings of old been shown the blessings of ISIS' "faithful brotherhood," they would have quickly forsaken their kingdoms.

The trouble, however, is that ISIS' digital media propaganda directly contravenes these precepts. In a video released shortly after the Charlie Hebdo attacks in Paris, a young male fighter urges Muslims in France to follow the path of jihad as a matter of pride (that corruptive emotion a believer is supposed to repress!). Similarly, the official spokesperson for ISIS, Abu Muhammad al-Adnani, directly addresses Muslim youth in an audio message, instructing them to join the caliphate and thereby become kings who rule the world and conquer the territory of lesser monarchs. These are deliberate maneuvers, calculated to appeal to those most dangerous desires for wealth and power.

In addition to wealth, power, and what one of the organization's playbooks describes as innate rebelliousness, ISIS media tries to mobilize young adults' fascination with violence and sex. The propaganda video titled "No Respite" aims to provoke the American government into military escalation. The video looks much like the trailer of a PEGI-16-rated survival horror video game, seducing young prospective players with lurid scenes of destructive aggression. Interspersed with various untranslated Arabic Islamic terms are images of accursed presidents wreathed in flame and enemy soldiers soaked in blood. And although it ends with a hypnotic recitation of the Quran, the narration has all the sophistication of a bratty teenager crowing over his athletic superiority before his rivals.

When it comes to sexuality, ISIS is obsessed with the evils of prostitution and sexual excess in infidel lands. But this hasn't stopped the group's young men from distributing nauseating videos in which--voices cracking--they giggle about bedding as many Yazidi slave girls as they please and pricing them according to their eye color. It's scarcely surprising that jihadi extremists have a history of inveigling vulnerable teenage girls into joining their cause by sharing photos of male warriors as pieces of "eye candy." When not reprehensible, sexual objectification is at least useful to the organization.

In the end, ISIS' message is remarkably unremarkable. Its standard-bearers are at once barely human and all too human. A point-by-point refutation of ISIS' scriptural interpretations is vital to counter-extremist (if not necessarily counter-radicalization) efforts. American Muslims are, to their credit, already doing this. But if we really want to prevent our young adults from being ensnared by this fanatical ideology, we might first get them to see that it's the ungodliest scam of our time--far removed from anything divine, and steeped in the same base tendencies it warns against.