Columnist Leigh Newman finds out a new way to fix our mental glitches with the help of Sendhil Mullainathan, the co-author of the new book Scarcity: Why Having Too Little Means So Much.

Last Saturday night while cleaning the house, I was talking to an old friend. We agreed to have dinner on Sunday. Twenty-four hours later, I was surprised when my old friend called. "I'm almost there," she said.

"The restaurant. Where we're meeting."

"Oh no," I said, looking down at my pajamas, which I was not only already wearing but had also splattered with the spaghetti sauce I'd just made. In a split, heart-sinking second, I knew what I was going to have to say, because I'd already said it so many times this year that it was laughable -- and humiliating. "I forgot. I'm sorry. I don't know what happened. I didn't used to be like this."

That last phrase is one that so many of us say to ourselves. We didn't used to send our critical business email to the members of our mommy group. We didn't used to forget to add the eggs to the banana-bread batter. We didn’t used to put anti-freeze in the oil tank of the car -- or commit any of those other, mindless mistakes that now impact our lives.

This is why I turned to Sendhil Mullainathan, a professor of economics at Harvard. Though an authority in behavioral science, just last week, this illustrious thinker forgot his glasses in his motel bathroom -- a mishap that not only supports his theory about why all of us keep slipping up, but also how to prevent it.

Step 1: Realize It's Not You
Let's start from the beginning of Mullainathan's story. In order to start his job teaching this fall at Harvard, he had to move from New York to Boston. Because he had a small apartment, he allotted 24 hours for the project. The day of, he spent from 8 a.m. to 6 p.m. supervising the movers and packing. From 7 p.m. to 10 p.m., he drove up to Boston in the full van. Then he parked the van, spent the night in a hotel, woke up at 8 a.m., brushed his teeth, washed his face and left his very-much-needed glasses on the counter.

Every time we do something like this, says Mullainathan, we think, "I’m stupid!" Mostly this happens because we realize that we're the only one who could have done it. There is no else one to blame. But (a) you're not stupid, and (b) feeling stupid is not the problem and will only cause you to feel discouraged and, frequently, to make more mistakes.

Step 2: Understand When You're Drunk
So what's going on? Though you might not realize it, you might well be "drunk" in terms of your brain's ability to process information. Let's say you've been working on an intense project -- moving apartments or finishing a big presentation for work or finishing the fundraising plan for your child's school. In order to complete it, you focus on the project to the fullest extent possible, putting aside anything not related to its responsibilities.

For your brain, this takes tremendous concentration and "bandwidth." Bandwidth as Mullainathan explains, is (a) your cognitive ability (your ability to think) and (b) your cognitive control (your ability to regulate impulses). After focusing on any kind of task for a long time, you run out of bandwidth, so much so that, according to his most recent research, the effect on the brain is significantly greater than several glasses of beer. "You wouldn't think of getting in your car after having three glasses of wine," Mullainathan says, "but if you've just used up all your bandwidth, you hop right in and grab the wheel. But you're equally as compromised."

Step 3: Plan Your Mistakes In Advance
The first step is looking ahead -- the same way you would with drinking before a party. You know that there are certain tasks that take large amounts of focus and energy. For example, take packing up an apartment. After putting everything you own into boxes, you're going to have low bandwidth and be more liable to make small mistakes. In a perfect world, of course, you could give yourself some time to recover. But if you can't, just recognizing that you'll be "drunk" before, say, you hit the road in the van, will reduce the number of mistakes you do make, say Mullainathan, because your brain moves into a more conscious thought process about the problem.

Step 4: Identify Your Repeaters
Now you know when you're going to make mistakes. But which mistakes? Shockingly, Mullainathan says, about 80 percent of the time we make the same handful of errors. Take leaving your glasses in your hotel room. You have done this before in some other form. You've left them at your friend's house. Or at the restaurant. Forgetting the glasses -- or losing the car keys in the trunk of the car or sending an email to the wrong person -- is what's known as a repeater. Once you've identified a time you'll be at low bandwidth, try making a list of specific things that will probably go wrong simply based on your history of errors.

By telling yourself about a specific thing that may go wrong, Mullainathan says, it probably won't. Furthermore, you can also prepare yourself. One year before the move, Mullainathan had identified losing his glasses as a "repeater," and so had bought two identical pairs that last time he went in for new ones -- an act that allowed him to read the writing on his moving boxes and unpack once he'd finally arrived.

Step 5: Revamp Your Calendar -- Or Throw It Out
Recognizing times of low bandwidth and dealing with common errors is helpful. But a more efficient solution might keep you from getting low bandwidth in the first place -- in other words, keep from getting "drunk." It would be nice, of course, if we could just increase our bandwidth capacity, but research, Mullainathan says, has yet to prove a way to effectively do so. Our ability to focus simply has a limit.

Most of us think we can cope with our mentally taxing lives by managing our time. Let's say you're looking at your calendar for next week, the way that he did with the move. Most of us think in terms of hours about what we can fit into our days. We have the morning free, so we fill it with the big meeting with the boss (10 a.m. to 12 p.m.). Then we have an intense lunch with the possible new client. (12:30 p.m. to 2 p.m.). Then at 2:30 p.m., we're getting off early to take all three kids to all three after-school activities. Timewise, this should work fine.

The meeting with a boss, however, takes a lot of bandwidth. You have to come up with a whole new ad campaign. Worse, at 11:40 a.m., you start thinking "I really need to prepare for that lunch!" So you stop listening and generating new ideas. You then race to the lunch, now at midbandwidth and with even less creative and analytical skills. There, you also lose the last 20 minutes, because, in your mind you are preparing the 2:30 p.m. pickup and are worried that you won't get back to the office in time and that you might forget the tutu for your daughter. "It's all doable, I have the time planned," you think, driving your kids first to ballet, then to hockey, then to pottery. Only to find the tutu in your backseat once you pull into the driveway.

What we need to do, Mullainathan says, is stop managing time and start managing our bandwidth. Of course, we can't just cut out activities and and obligations. But when we sit down to plan our week, we can think about our schedules in terms of what our brains can reasonably handle -- no matter what our bodies are capable of. For example, we can give ourselves just as many high-bandwidth activities but space them out differently or stagger them with low-bandwidth activities.

Step 6: Go On Automatic
Another thing you can do is to transform certain high-bandwidth activities into low-bandwidth ones by making them "automatic." When you first began brushing your teeth, the activity took a lot of time and concentration. But as you did it over and over, you no longer had to think about getting the toothpaste on the brush (without squirting it all over the counter) and moving that big plastic tool over all your teeth (including the back side of incisors). You can certainly do the same, repeating responsibilities at work or at home until they are, if not mindless, then less mindful. Serve the same breakfast for 30 days. Send an email in the same way 60 times (i.e. write, spell check, reread, send).

Moving, unfortunately, isn't something most us can do with sufficient repetition to make automatic. So what was the solution for this social scientist, other than to have a quick fix after he'd already erred? "I should have done as I teach others," he says with a sheepish laugh. "It wouldn't have taken much to keep me from losing my glasses. All I needed was an hour to recover from the move the next morning. In other words, I needed to sleep in a little later, eat breakfast and rest my bandwidth." In other, other words: The next time you get your brain drunk, consider giving it time to recover from the hangover.

Sendhil Mullainathan and Eldar Shafir are co-authors of Scarcity: Why Having Too Little Means So Much. 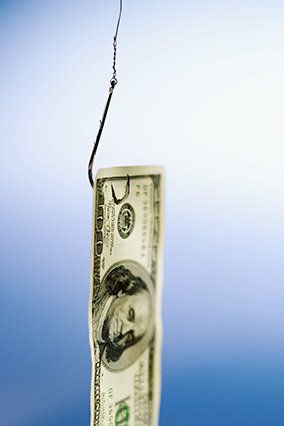 1 / 6
Mistake #1: Thinking Of Rewards
The average U.S. household is part of 18 consumer-loyalty programs, and, in 2011, racked up $622 in rewards from banks, retailers, restaurants, hotels and other businesses, according to a study by <a href="http://www.colloquy.com/press_release_view.asp?xd=95" target="_blank">Swift Exchange and Colloquy</a>. That's a lot of money back -- or would be -- but people didn't redeem, on average, nearly a third of those rewards, leaving $205 on the table. Since rewards often expire and certainly don't accrue interest, it's best to cash in as soon as you can. If you have the choice of cash or a gift card, consider this: Not only will a gift card tie you to one specific retailer, but also, recent <a href="http://www.acrwebsite.org/volumes/v35/naacr_vol35_334.pdf" target="_blank">decision-making studies</a> have found that <a href="http://www.apa.org/news/press/releases/2008/09/credit-cash.aspx" target="_blank">people plan to spend more with a gift certificate than cash</a> -- meaning that $25 gift card will likely disappear faster than $20 cash back.
Thinkstock