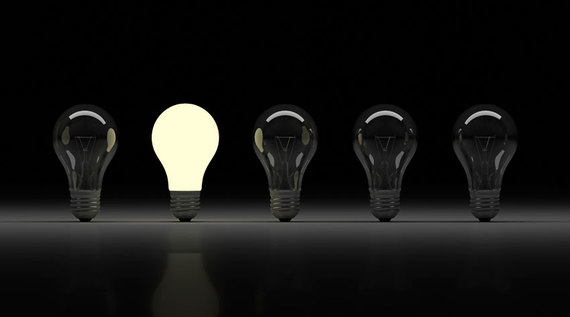 It's easier to start from scratch than it is to get out of a creative rut. That's because we know a lot more about what sparks creativity than we do about what blocks it. The Greeks believed that inspiration came to us through muses who literally visited us. Freud insisted that creativity was a kind of sublimation, a way of dealing with repressed inclinations. Jung theorized a collective unconscious, structures of mind that all people have in common. Today, psychologists like Kay Redfield Jamison describe creativity as a mood disorder, a mild form of madness.

We have countless answers to the question of what drives people to be creative, but the better, tougher--more elusive--question is its opposite: what stops people from being innovative? Why do so many of us have trouble overcoming creative dry spells? There are, of course, tons of studies attempting to address just that, yet many of them are biased by fundamental attribution errors. That is, these theories attempt to impose orderly patterns on complex, ineffable cognitive phenomena. For example, recent reports reverse-engineer the lives of geniuses like Einstein and Edison and identify the qualities that made them creative as symptoms of disorders like dyslexia. To attribute these late visionaries' talents to psychological conditions is to suggest something improvable and to falsely assume causality. Further, it is to give a tidy explanation for what are, in actuality, the messy realities of the human mind.

Rather than symptomizing creative blocks, I offer here three different factors that impede innovation -- the inner saboteurs of creativity. We can't destroy them completely, but we can manage them. Understanding how these saboteurs work will help us get out of that rut and avoid getting into new ones in the future.

While positive motivation appears more encouraging than negative motivation, the truth is that negative incentives can actually be even more powerful. Creativity is, after all, often born out of constraints -- not freedom. And necessity is the strongest motivating force of all: discomfort, alarm, and dissatisfaction are the starting points of many great innovations.

Figure out which motivators move you most. Pay attention to what gives you energy and what takes your energy. If you're more creative when given soak time, allow yourself more space and time to generate ideas. If you're more creative when given deadlines, impose a stricter timeline on yourself. Take a look at Mihaly Csikszentmihalyi's influential book, Flow: The Psychology of Optimal Experience, for further tools on discovering what motivates you to create.

Confidence. Self-doubt is a form of paralysis: lack of confidence shuts down our creative forces. When we're unsure of ourselves, we can't perform to our fullest abilities. Self-confidence is highly subjective and situational. For example, a neurosurgeon might have nerves of steel when operating on a patient's brain, but may quake when giving a public speech. This debilitating anxiety is an evolutionary feature, a primal fear mechanism focused on what we won't want to happen. It's a neurobiological impulse to avoid what makes us uncomfortable. When that neurosurgeon's hands sweat and shake at the lectern, it's as if he's running away from a predator. Here, our self-doubt becomes a self-fulfilling prophecy because we look for confirming feedback to validate our instincts. We're setting ourselves up for failure. We're our own saboteur.

No one wants to be afraid, but fright can be empowering: it heightens our senses and keeps our expectations realistic. It stops us from becoming overly enthusiastic or, to use Alan Greenspan's phrase "irrationally exuberant." Hoping for the best and preparing for the worst is a sensible approach to innovation. Lack of confidence isn't always a terrible thing -- we just need to stop it from taking over us.

The best way to beat self-doubt is to create a sense of destiny. This is essentially faking it until you make it, or temporarily embracing delusions of grandeur. Think of it like a balancing act. If you're being held back by anxieties about your abilities, you can make up for it by welcoming the extreme opposite: thoughts of great confidence. For example, there is some evidence that Olympic pole-vaulters who give themselves affirmations go on to clear heights that they've never before achieved. This is one of the things they learn to do at the Olympic camps in Colorado Springs. If building up yourself doesn't work, simply consider the worst that can happen if you fail and put it in context. Chances are unless you're a combat pilot or a neurosurgeon, it's not the end of the world. Tom Kelley's book, Creative Confidence: Unleashing the Creative Potential Within Us All, is a great resource for people who want to develop their innovative courage.

Isolation. The lone genius is a myth perpetuated by romanticized accounts of creation. Solitude is simply not conducive to innovation. Creativity is highly interactive. At our core, we are social beings--even the most introverted of people. In his path-breaking Knowledge Trilogy -- The Discovers, The Creators, The Seekers -- Daniel Boorstin chronicles the great creative ensembles throughout human development. He shows us how history has brief periods of ballistic creativity in relatively small regions, like the Song Dynasty in 11th-century China and the Renaissance in 15th-century Florence. The 20th- and 21st-century equivalents are creativity clusters like Silicon Valley, the Research Triangle of North Carolina, and Tel Aviv's Startup City.

Great ideas travel from one domain to another and spill into other ideas. This is the concept of cognitive mobility -- and this is why these very concentrated areas of high creativity produce so much of the world's intellectual property. When people with all different kinds of expertise are in close proximity of each other, they reach unexpected, cross-boundary solutions. Often the most effective solutions are intersectional and come from adjacent fields. For example, the person who came up with a way to price options was actually someone who studied the trajectory of rockets. Even though rockets and options appear to be two wildly dissimilar objects, they are both highly dynamic things that change rapidly over time, so being able to understand the movement of a rocket from one nano moment to another proved to be indispensible in understanding options.

Start making alliances with people who are unlike you but who have comparable aims. Your ideal creative ally is someone who has different capabilities and proficiencies than you but is trying to accomplish the same fundamental thing whether it's making art, designing software, or discovering a molecule. Once you've built your team, it's time to run experiments, build prototypes, and construct proofs of concept.

Understand that constructive conflict is an essential part of the creative process. The tensions you experience with and against your allies will generate the hybrid ideas you wouldn't have reached otherwise. Pay attention to the acknowledged and hidden masters around you. Keep a journal of key new insights, so you are aware of what you're learning as you go along and can apply these lessons at any moment. Eric Weiner's new book, The Geography of Genius: A Search for the World's Most Creative Places from Ancient Athens to Silicon Valley, is a wonderful guide to finding your creative place and to thinking about what kind of people you need to be around to achieve your innovative potential.

The saboteurs of creativity are all within our control, because they're inside us. We'll never be able to get rid of them completely, but we can anticipate and strategize around them, making them work for us. Alternately, we can sidle up to our saboteurs and enjoy the peace and quiet of not creating -- if only in the brief moment before we're ready to innovate again.