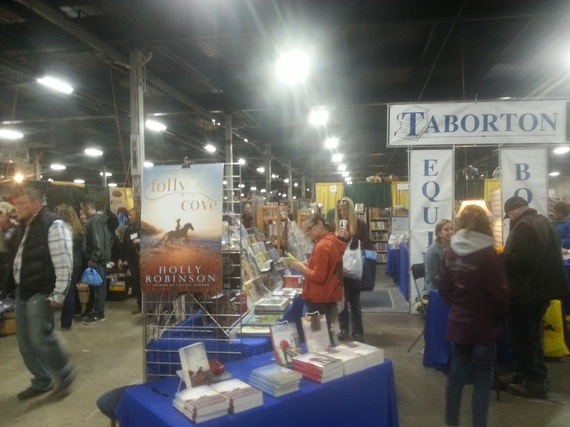 Recently, I asked a debut novelist what events she had planned around her book launch. She shrugged and said, "Not much. Most marketing is done online these days. That's fine with me. I hate speaking in public."

She's right. Unless you're selling like Paula Hawkins or John Grisham, your publisher won't pay to send you anywhere. It's more cost effective for them to put their marketing budget toward advertising and online promotions. And, hey, we writers aren't typically the most confident public speakers.

At the same time, if you don't do book events, you're going to miss out on connecting with readers and celebrating not only your book, but the craft of writing. Even if the idea of appearing in public seems nonsensical or downright scary, set up your own events and get out there. Here are some tips to help you survive going public with your book:

Think Beyond Bookstores
Many bookstores won't arrange events for indie authors unless they're local (and some won't even do it then). Even if you're traditionally published, it's important to think beyond the bookstore. This past weekend, for instance, I got together with authors Connie Hambley, Laura Moore, and Natalie Reinert to talk about their books and my most recent novel, Folly Cove, on a panel about why authors put horses in fiction. We held the panel at Equine Affaire, a huge horse event, and signed books afterward through Taborton Equine Books. What a blast!

Make It a Conversation
If you're scared to speak in public, try Toastmasters, practice in the mirror, or do what I did and take a stand-comedy class. Nobody wants to listen to an author drone on from notes at a podium or read an entire chapter of a book. For each event, try to talk about yourself and the book for a few minutes, then read for no more than ten minutes and take questions. The idea is to turn your event into an interesting two-way conversation.

Try the Meet & Greet Approach
Some of the weirdest but most entertaining events I've done are "meet and greets." I typically do these at Barnes & Noble bookstores, but I've arranged them at other stores as well. The idea is that you sit at a table somewhere in the store that gets heavy traffic--often by the front door or the cafe--and talk to people. That's it. It's like being a Wal-Mart greeter, except you don't have to wear a blue smock and you happen to be sitting at a table with a stack of your books on it. The idea is that, by engaging in conversation with you, people will want to buy your book. To my surprise, I like doing this, maybe because there's no real pressure in, say, complimenting the sweater of a woman who walks by, or answering questions like, "Where's the bathroom?" (Many people will think you're a bookstore employee at first.) I have met all sorts of people this way, and I have sold a surprising number of books to complete strangers.

Don't Forget the Library
By far, most of my author events take place at libraries. Sometimes I meet with book clubs, but other times I arrange events myself, often to coincide with a theme--an upcoming holiday, local settings, or whatever else the librarian thinks patrons might enjoy. I've also run writing workshops at various libraries, or I've met with their ongoing writers' groups to talk about publishing. It's a great way to build a community not just for your book, but for yourself.

Groups Are Great
If appearing alone scares the pants off you, either because you're a shy public speaker or don't think you can draw a crowd, try arranging a panel. I speak on a panel of cross-genre writers, The Nevertheless Writers. Together, we often draw more of a crowd than we can do individually, especially if we're speaking to aspiring writers. It's also fun to get together with other writers in your genre and speak on a common topic, whether it's horror, time travel, or families in conflict.

Don't Do This to Sell Books
Finally, the most important advice I can give you about book events is this: Don't do them because you want to sell books. Arrange events with the goal of meeting new people, connecting with librarians and booksellers, visiting with old friends, and--most importantly--to celebrate why books matter.