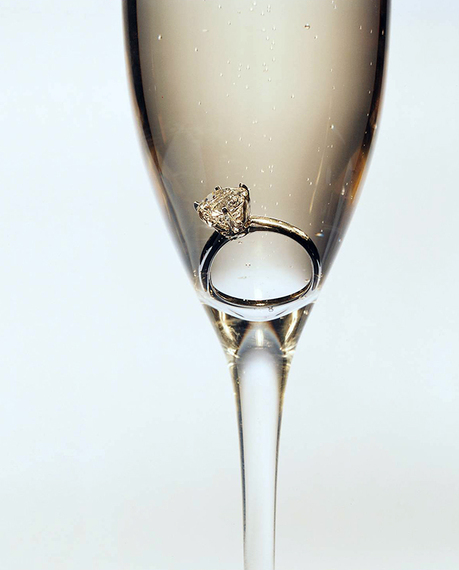 There's nothing like the holiday season to remind you (or for others to remind you) that you're flying solo. You get nosy questions about your love life over the holiday dinner table, see commercials depicting perfect couples cozying up by the tree, and notice that your Facebook feed is suddenly saturated with "I SAID YES!" announcements. After all, December is the most popular month to get engaged, and that means you, my friend, are smack in the middle of engagement season.

But while it's true most engagements happen around this time of year, it's also true that the majority of us aren't flashing new bling this holiday season. The single population is the largest it's ever been with a majority of adult Americans unattached, according to recent statistics, and the holidays are actually an awesome time to be unattached. Think about it: This is one of the most social times of the year. So instead of hiding out until spring, take advantage of the holiday season, and use it to your advantage.

Figure Out What You Really Want
With the New Year around the corner, you can focus on who you want to be and who you want to be with in 2016. According to clinical psychologist Douglas Mennin, Ph.D., "Work on clarifying what you actually value rather than working on lofty goals that might set you up for failure or self-judgment."

To-do lists are overrated. When you focus on who you want to be (patient, focused, open--you get to pick), you'll know what to do. Thank your lucky stars that you're not attached to exes who didn't get or appreciate you, and commit to a new year surrounded by people who bring out your best.

Meet Other Singles--and Not Just For a Romantic Connection
When it feels like everyone's attached but you, it's important to expand your social network. Don't just focus on picking up for dating, pick up new people for friendship. The reason is twofold: You're likely to meet new dates through an extended social circle, and you're going to enjoy your singlehood more when you're with others who are in the same situation.

Take Inventory
Focus on what you have, not what is missing this season. It may be true that you don't have a plus-one for a holiday party, but chances are there's a long list of things to be thankful for. Research shows that practicing gratitude increases your physical, psychological and emotional well-being (which will help you now, and again when you meet that special someone). Mennin says, "There's good neural evidence to show that drawing away from self-focus, where a person will inevitably fall short of what they want or have, and focusing instead of things in your life that are actually rewarding will makes you feel better."

Related: What Guys Really Think About Your Underwear

Reconnect With the Things You're Passionate About
The best way to survive the holiday season is to participate in activities that bring joy. This may sound obvious, but it's amazing how few of us carve out time for the things we love to do. Miss rock-climbing? Invite a friend to join you at climbing gym. Love painting? Bring out your easel, even if it's for a couple of hours over a weekend. Don't think in terms of all-or-nothing. An hour of doing something you love is better than not doing it at all.

Hibernate--and Don't Feel Bad About It
Let's face it, a wonderful part of being single is that you're not responsible for anyone's happiness but your own. This holiday season if you feel like cozying up with a good book and eating cookie dough in your pajamas, or watching endless Sex and the City reruns, do it. This is the stuff people dream of later when they're overwhelmed with family duties.

Reach Out to the People You Love
Everyone has that slightly awkward or inappropriate family member at her holiday gathering, but let that person provide comic relief. This is the time of the year to hang out with the people you love and miss. Nothing is more important than the relationships you value, so use this season as an opportunity to catch up and connect with those you don't spend enough time with over the year.

Prepare Your Sound Bite
If you're feeling pressured by all the queries about why you're still single (Don't you just love that?), come armed with a confident and clear response. Years ago when one of my aunt's friends said, "When are you getting married?" I responded, "Thanks for your concern, but getting married is not my challenge--that's easy. I want to stay married." That shut her up pretty fast.

If it feels like everyone's getting engaged but you, here's a fun fact: December is also "Breakup Season." According to a Facebook survey conducted by David McCandless and Lee Bryon for a TED talk, the words break up and broken up appeared in thousands more status updates two weeks before Christmas Day than any other time of the year. So remember: You're not alone, even if all those cute (or cringe-worthy) holiday engagement photos are flooding your feed.

Andrea Syrtash is a Relationship Expert and the author of the new Audible book, He's Just Not Your Type (and That's Good Thing)

More from Glamour:
10 Things He's Thinking When You're Naked
56 Phenomenal Wedding Dresses That Will Make Your Heart Skip A Beat
14 Seriously Cute Hairstyles for Curly Hair
31 Ways to Wear a Ponytail, for Every Hair Length and Texture
8 Super-Easy Steps for Looking Flawless--Fast!