Pundits of all stripes and persuasion have not only been confounded by Donald Trump's surprising traction in the early months of the Republican presidential primary, but plenty have also been stymied about how to stop his seemingly runaway train.

There've been secret meetings among the GOP establishment, and party hacks have issued their suggestions for derailing the Trump Express. Former Scott Walker strategist Liz Mair (who lasted all of one day on the Walker campaign) recently offered "10 ways to blow the billionaire out of the water," none of which would have even the slightest impact on the Trump battleship. Talk about wonk challenged. What's abundantly clear is that the political elites in this country are clueless when it comes to voters in the hinterlands. 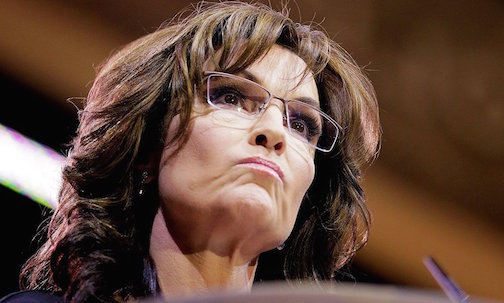 Come now the great divider -- indeed, the most polarizing figure in American politics -- Sarah Palin. She appeared with Trump on Wednesday at an anti-Iran-deal rally in Washington, D.C., and for the first time in months, she did what no one else has been able to do -- she actually sucked some of the oxygen out of Trump's appearance.

Palin garnered headlines, Internet traffic and television sound bites by referring to members of Black Lives Matter as "dogs." In what the Washington Post described as yet another "winding speech," Palin screeched out a "word salad" with references to "Obama's selfie stick," "suppin' with Sharia," "sprinkly fairy dust," and "pretty pink kaleidoscopes," while professing "sweat is my sanity."

Those who have dismissed Trump's candidacy -- and let me be the first to admit that I most certainly did when he originally announced--have failed to grasp the surprisingly broad swath of his appeal. Anyone who thinks he's the candidate du jour or the GOP "flavor of the month" à la Bachmann or Cain had better think twice.

Polls indicate that The Donald's support has been coming from an unexpectedly complex cross-section of the American populace -- one, in the words of the New York Times, composed of "a demographically and ideologically diverse coalition, constructed around personality, not substance, that bridges demographic and political divides."

Palin's, on the other hand, comes exclusively from the marginal right -- the Tea Party and beyond. If Trump ever hopes to broaden and expand his base, he won't be doing it by veering starboard, into the same dark corner of extremism into which Palin painted -- and continues to paint -- herself. It's a lose-lose proposition.

One of Trump's various appeals is that he's truly an outsider to the political process -- while Palin has been a career politician ever since she first ran for the Wasilla City Council nearly a quarter-century ago. Moreover, in spite of her constant shrieking at being "anti-government," there are now four generations of Palins slurping from the public trough in the Matanuska Valley. The hypocrisy is mind-boggling.

Trump's favorability ratings actually have moved up in recent weeks. That's a rarity in politics, but they did. Palin's have only moved in one direction. Ever since her catastrophic cameo as John McCain's running mate, her favorability ratings have headed straight for the floor. Even among Republican voters, she's anathema. In Alaska, her numbers are strictly sub-Arctic.

Palin teased out runs for the presidency in both 2012 and again in 2016. Both times she chickened out. She neither had the gumption -- nor the intellectual bandwidth -- to get up on that particular horse. When it comes to political fortitude, the quitter governor is all hat and no cattle.

The next several months will prove whether Trump's for real or not. So far, little has tripped him up. The one proven millstone on the GOP roster is Sarah Palin. If anyone wants to stop Trump, just encourage him to keep Shotgun Sarah as his sidekick. She'll sink him faster than a proverbial lead balloon.