If you had to give a single life lesson to your child, what would it be? One of the first lessons that we should teach our children is that every one of their actions has a reaction in the world -- that what they do does matter!

By the end of their third year, when children have already acquired awareness of themselves and begin to accept rules of behavior that you have taught them, they are already fully capable of feeling emotions such as guilt, shame and pride. And this is the right moment to instill in them the great lesson of cause and effect which says that every action has a reaction. In other words, if you step there, you'll fall, or if you hit your sister, you will receive a punishment. Unfortunately, many of the teenagers and young adults nowadays never learnt this crucial lesson, and this may be one of the primary causes for the ensuing chaos in their lives, or around them. And this is basically due to their basic lack of recognition and responsibility for their actions in the world.

We teach cause and effect whenever we help a child recognize a relationship between two things, or when we demonstrate that one event is the result of another. For your children, I recommend that you seek concrete examples, since they don't understand complicated things at such an early age. For example, take them out in the sun and tell them, "If you're out in the sun, it will make you hot." "If you are there long, you could get a sunburn." Or you can take them out to run and then say, "If you run a lot, you will get tired." Another concrete example is to have them drink a glass of water and tell them, "If you drink water, you will no longer be thirsty."

There are many games that you can also play with your kids at home to teach them cause and effect. For example, you can start asking your children simple things such as: "What do you think will happen if we leave ice cream in the sun?" or, "Plants need light and water. If it is not watered, what do you think happens to a plant?"

From there, you can move to explaining the consequences of their behavior and the acceptance of natural rules derived from this behavior. That way, they can see them as consequences, not so much as punishment. For example, "If I play in the living room, I don't get to play at recess (So I do not come out to play). "If I eat at lunchtime, I won't be able to eat later."

Once they fully understand what cause and effect is, then you can proceed to explain cause and effect that is not so obvious. In other words, cause and effect that is more oriented to doing good than to explaining it. For example, "If you give food to a bird, you are doing good and guess what you will get in return? More good!" Why is it that all religions of the world teach to do good? The only way to live well is by generating good deeds not only for oneself but also towards others. After all, at the end of the day what we most want for our children is that, growing up, they become good people and learn to do good in the world. And that's why cause and effect is such a crucial life lesson. 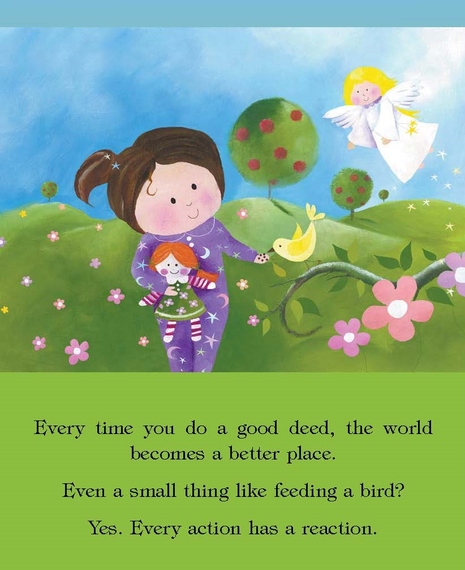