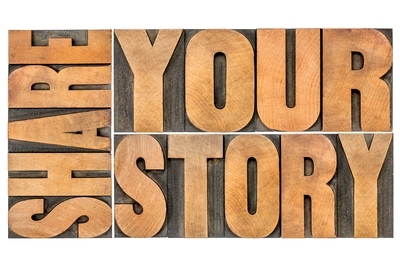 "Everybody likes to tell a story. Little children do it effortlessly. Great artists do it with talent and years of practice. Somewhere in between stand you and I." - Sylvia Ziskind

Let's start with the basics: You already know how to tell a good story. You do. You've been telling good stories your entire life. Today, you probably told a few. And later, tonight, you will probably tell some more -- whether they are merely accounts of your day, a memorable encounter you had at work, or a reminiscence from days gone by.

Story is the ocean we are swimming in. And because it is, we don't necessarily feel wet when we're in it, but we are. Fish aren't taught to swim. And you aren't taught to tell stories. As a child, you didn't need to be taught. All you needed was to hear them and then tell them to others -- which you did -- everything from The Three Little Pigs to Jack and the Beanstalk to the excuses you laid on your teachers for not handing in your homework on time.

Where do you begin? With one simple commitment: To stop telling yourself the story that you don't know how to tell a good story.

There is only one thing you need to know if you want to tell a good story: Storytelling is part art and part science. And of the two, it's more about the art than it is about the science.

Communicating your humanity is the art. The more human you are willing to be (i.e. not perfect, not an expert, not a superhero), the more likely it is that people will connect with your story. The key to communicating your humanity? Your passion for telling your story, your respect for your audience, your authenticity, your understanding that people will get what they need without you teaching or preaching, and your ability to engage the attention of others -- an ability that includes seven subtle elements: voice tonality, body language, facial gestures, hand movement, pacing, adapting to the non-verbal cues from your audience, and the choice of what details to include.

Can these be learned? Of course they can. But the real key to successful storytelling is less about study than it is about practice. The more stories you tell, the better you'll get. It's as simple as that. Real-time, you'll figure out what works and what doesn't.

The science of telling a good story is much less complicated that you think. Fundamentally, it's all about structure and the inter-relationships of the elements that comprise the structure. Just like a house needs a foundation, framing, walls, and a roof, a story needs structure, too. Once you understand the elements of story structure, you're halfway home.

What story will you tell today?

Mitch Ditkoff is the Co-Founder and President of Idea Champions, an innovation consulting and training company based in Woodstock, NY. The above is excerpted from his forthcoming book, STORYTELLING AT WORK: How Moments of Truth on the Job Reveals the Real Business of LIfe.