How do you tell if the 12-country Trans-Pacific Partnership (TPP) is a good deal or a bad one?

Consider the recent climate summit agreement in Paris. Nearly 200 countries negotiated the deal, more or less in public for the world to see.

All signatory countries wanted a sustainable planet where their citizens could prosper.

The climate change deal in Paris is not air-tight. Still, it is a significant political, social and moral commitment by leaders of most countries in the world to do better.

TPP defines bad rules for globalization. It sets up skewed power relationships for dealing with climate change, inequality and many other important public policies. 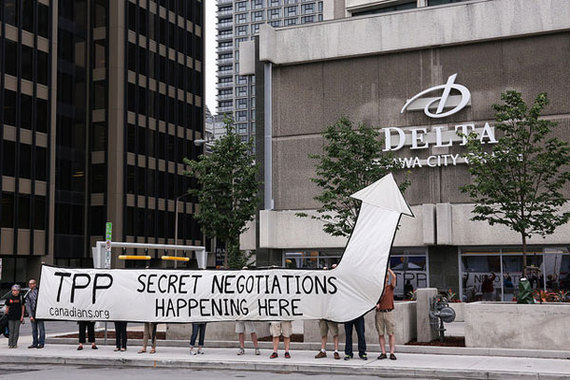 What about labor? First, what ARE the labor protections? No child labor, no forced labor, the right to form unions, no discrimination for religion, race, country of birth. By modern standards, we take these basic human rights for granted. Didn't we win these fights generations ago?

We have trade deals with Colombia, Guatemala, Honduras and Peru, where labor standards are at the level of life-and-death. Guatemala is arguably the most dangerous country in the world for labor leaders. Violence against workers in Colombia is still common.

Last year, a jaw-dropping and sobering performance from our negotiators lowered trust in the USTR close to zero.

On May 8, 2015, President Obama spoke at Nike in Oregon about labor rights. Irony aside, the speech was eloquent and inspiring.

And if Vietnam, or any of the other countries in this trade agreement don't meet these requirements, they'll face meaningful consequences. ... If you're a country that wants in to this agreement, you have to meet higher standards. If you don't, you're out. If you break the rules, there are actual repercussions.

Four days later, the Senate approved language saying that all countries in any new trade agreement must meet basic standards for human trafficking. As it happens, six of the 12 TPP countries have serious problems with human trafficking. Of the six, only Malaysia failed to meet the Senate's standard for inclusion in TPP.

Two weeks after the Senate vote, shocking press reports from Malaysia described mass graves, bodies showing signs of torture and 28 camps where refugees were held in pens for human trafficking. This was the second large-scale discovery of mass graves on the Thai-Malaysia border that month. More reports followed.

The Prime Minister of Malaysia is suspected of corruption in a $700 million investigation in the U.S. and other countries. Official corruption extends into human trafficking and jungle camps.

The USTR and Obama administration could have put meaning into the President's lofty promise at Nike. They could have said, "Malaysia is out of TPP. When Malaysia deals effectively with human trafficking, they can dock into TPP like any other country."

Instead, on July 27, the official U.S. government upgraded its ranking of Malaysia regarding human trafficking, without explanation or justification. Presto! Malaysia is qualified to stay in the TPP.

President Obama's eloquence at Nike will be cold comfort to Rohingya refugees in Malaysia and Thailand who are sold from one human trafficker to another. Similar glowing promises for labor standards, going back to Gerald Ford, are lost on the families of murdered labor leaders in Colombia, Guatemala, Honduras and Peru.

The power relationships in TPP will be great for factories in Vietnam, where 90,000 workers make Nike's shoes. TPP will be great for Hewlett-Packard, Intel, AMD, Dell, Apple and other electronics producers, who use components from Malaysia, where 28% of workers in the electronics industry are subject to forced labor. Producers of palm oil, textiles, and garments in Malaysia can continue to use child labor.

Thailand and Indonesia want to join TPP, alongside reports of official complicity in 21st century slavery in their fishing industries.

It's clear that the Obama administration has no real interest in enforcing labor or environmental laws. It's shameful to promise 21st century standards, then accept conditions in Malaysia, Vietnam, Colombia, Peru, Guatemala, and Brunei as global norms.

So, what is the difference between the Paris Climate Summit and TPP?

In 2014, over 300,000 environmentalists marched in New York City to make the case that climate change was a top priority. In Berlin, 250,000 Europeans sent the same message, leading up to the Paris summit. Pope Francis made climate change a moral issue. UN Secretary General Ban Ki-moon calls climate change the defining issue of our time.

A generation of voters and activists followed the open public process for negotiating the Paris agreement. They could see themselves and their interests reflected in the deal.

Inequality is another overriding global issue. President Obama made inequality a defining challenge of our time.

As we take on climate change and income inequality as global issues, we see that TPP is worse than a step in the wrong direction. TPP locks in toxic power relationships that will block positive change for a generation or two.

TPP was negotiated in secret, keeping civil society at arms length. TPP clearly reflects interests of global investors, defining a version of globalization "of, by, and for the 1%."

House Minority Leader Nancy Pelosi said we should start over with a new paradigm for trade policy. She and many others would support a deal that does as much for workers and the environment as it does for global investors. That's exactly what we should do.