Ross grew up with the family legend of a great-grandfather fighting in the American Revolution that evoked all kinds of exciting possibilities and stories. His descendants were sure Grandpa had been on the front line, fighting alongside General George Washington at the last battle at Yorktown. Different stories and guesses were passed down through the generations until some family members started to wonder if Great-Grandpa John Shaffer was even in America at the time of the war.

After careful research and the discovery of some court records, the truth came out. John Shaffer, Ross's 6th great-grandfather, was indeed drafted into the army during the last year of the American Revolution. However, on the way to Yorktown for the final battle, John became so sick that he was discharged several days before the surrender of Cornwallis. In all, Private John Shaffer served only five months in the army, and it isn't likely that he ever even saw action--or General Washington.

The story isn't the glamorous legend that came down through the years of family lore. Instead, it's a story about a real man who got sick, went home, recovered, and tried to make the best of things. It seems to be human nature to idealize our ancestors, to make them into super humans. Perhaps, we tell ourselves, if they were great, then we must have inherited some of that greatness. Oftentimes, however, as we dive into the truth, we instead find people who are like us: products of their time and culture, people who made the best they could with what they had.
And, perhaps, when we relate to our ancestors and see them for who they actually were, we find a connection that is stronger than the admiration that stems from myths that grow more fantastic each generation. So, how do we connect to the truth behind family lore? Records and research can get us pretty far, but it isn't just census and court documents that can shed light on the truth of our ancestors' lives. In fact, our ancestors have passed down an even more accurate, more powerful record to each of us. This record was never lost or tampered with (or we wouldn't be here!). That record is our DNA. 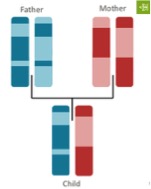 The Truth Is in There

Reading this record can turn up surprising information. In fact, we find that almost every person who takes an AncestryDNA test finds out something about themselves they didn't know previously. An AncestryDNA test includes both an ethnicity estimate and a tool to discover and connect with genetic cousins. For some, like adoptees, the results can shed light on unknown origins and often enable contact for the first time with close family members from their biological lines. 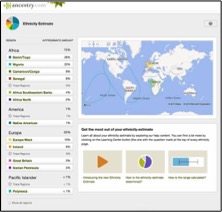 In Season Two of Finding Your Roots, we met the actor Courtney Vance. Courtney was raised by his birth parents, but his father, Conroy Vance, knew nothing about his own biological parents. According to Courtney, Conroy, raised by loving foster parents in Chicago, was consumed by his desire to know the names of his birth mother and father and by his inability to find them. By locating Conroy Vance's birth certificate, our researchers discovered the name of his birth mother, Ardella Vance, 17 years old and unmarried when her son was born. The space for his father's name was left blank. Through his grandmother, we were able to construct a paper trail along Ardella's branch of Courtney's family that led to previously unknown roots in Arkansas, where his great-great-grandparents--Ardella's grandparents--had relocated sometime before 1880, part of a mass migration of African Americans, most of them freed slaves, from elsewhere in the South.

Ardella Vance's name was our first break in the case of resolving Courtney's father's paternity, and Arkansas was the second. Running Courtney's Y-DNA through a vast database that contains the Y-DNA results of more than a half million men, turned up an identical match with a man named James Arrington, a doctor in Lewisville, Arkansas. In other words, Courtney and Dr. Arrington share a common male ancestor on Courtney's father's father's line. Courtney's grandfather may well have been an Arrington; several men with that name lived near Courtney's grandmother when she would have conceived Conroy. Although we can't know with 100 percent certainty when this common ancestor entered Courtney's father's family tree or whether his last name was indeed Arrington, the genetic relationship between Courtney Vance and Dr. James Arrington is definitive and without DNA science would have remained entirely unknown.

For others, the AncestryDNA ethnicity estimate can shed interesting light on family origins. This estimate compares a customer's DNA to the DNA of people from 26 regions around the world, estimating to which populations that customer's DNA is most similar. For example, a person whose great-grandmother was full-blooded Cherokee would generally have about 12.5 percent ethnicity from the Native American category.

While most AncestryDNA customers don't have the Native American ethnicity that they are looking for, hidden gems often lie in other unexpected results, opening new leads for research into their distant past. For example, someone who expects German ancestry might be surprised to find a lot of Irish ethnicity, leading to the discovery of stories about the Great Famine and migration to the U.S. that might have otherwise remained unknown.

Take the stories of two of our other guests in this past season of our PBS series "Finding Your Roots": Aarón Sánchez and Jessica Alba. Both have always identified as Mexican Americans. On both sides of his family, Aarón knew that his Mexican roots ran deep; for Jessica, these roots were on her paternal side only. Their DNA revealed similar genetic breakdowns--and hidden histories for both of them that were nowhere to be found in the paper trail. Today, some two-thirds of Mexicans consider themselves mestizos, or of mixed ancestry (defined by the American Society of Human Genetics as "individuals with a genetic background consisting of Amerindian, European, and African contributions," in this case derived from Spanish and other European colonists fathering children with indigenous Native Americans and with African slaves). Accordingly, Aarón and Jessica's results at first glance came as little surprise but were the envy of many of the other guests on our PBS series. Both had substantial percentages of Native American ancestry (24.5 percent for Aarón and 22.5 percent for Jessica) and small but not insignificant percentages of sub-Saharan African ancestry (3.7 percent for Aarón and 2 percent for Jessica). None of their Native American or African ancestors could be named, but their presence was strongly manifested in Aarón and Jessica's DNA.

It was their European ancestry that yielded the greatest surprise. Let's start with Aarón. Half of his European DNA was Iberian (Spanish), but analysis also revealed small percentages of Ashkenazi Jewish, North African, and Middle Eastern DNA, the presence of which suggested a hidden history of Sephardic Jewish ancestry. Our researchers believed that some of Aaron's ancestors were so-called Crypto Jews, Spanish Jews who sought refuge in the New World after being expelled from Spain by Isabella and Ferdinand in 1492. (Had they stayed, conversion would have been mandatory, refusal to do so punishable by death.) In their new home across the ocean, these Jews adopted Catholic ways in public but continued to practice their Judaism in private. Aarón's DNA revealed as much as 20 percent Sephardic Jewish ancestry, which indicated that his Jewish ancestors may have continued to marry other Jews for generations. Born and raised Catholic, Aarón said his mother had always had an affinity for Jewish culture. Now, he learned, it was part of his ancestry.

Jessica, also born a Catholic, had Sephardic Jewish ancestry as well. We tested Jessica's father's DNA at the same time we tested hers. Every person in the DNA database who shares Jessica's father's mitochondrial DNA signature (which Jessica, of course, does not share, as mtDNA is passed from mother to child) was from Spain, Italy, Germany, Poland, or Ukraine, and each one reported Sephardic Jewish ancestry on their maternal lines. Over the centuries the Jewish traditions practiced by their ancestors had disappeared, but traces of their Jewish heritage remained in their DNA.

So, while DNA might not confirm the legend you've heard since you learned to walk, it might bring you a little closer to understanding who your ancestors actually were. Our ancestors were real people, with real successes and real failures. And, somehow, over the course of generations, the choices they made and the DNA that they passed down molded the life that we have today.